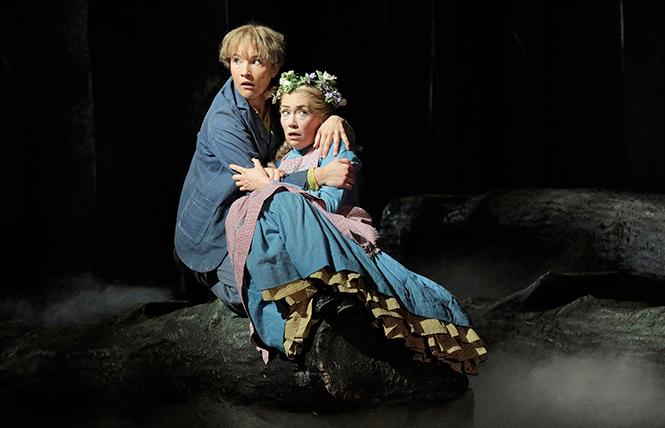 McDonald's cheerful vision of spunky youngsters outsmarting a wicked old witch is softer than the Brothers Grimm edition, but Humperdinck's librettist, his sister Adelheid Wette, already cut the more frightening bits. This is a determinedly family-friendly show in English translation, with some sophisticated visual asides for adults. SFO is onboard with discounted ticket prices for children, and the War Memorial Opera House management is happy to supply booster seats.

This doesn't mean grownups won't enjoy themselves. The show is big and bright, and the musical values are high. If you're feeling shy, find a kid and introduce them to the wonder of opera. It's a win-win for all.

Humperdinck's tuneful score, like Wagner in a really good mood, is catchy and hummable. The broad sweep of the lush symphonic orchestration is thrilling. On opening night, conductor Christopher Franklin occasionally lost his grip on the big orchestra, but the strength of the singers prevailed. Only the chorus of Gingerbread Children at the conclusion sounded a little thin. They made up for it with endearing energy and sincerity. 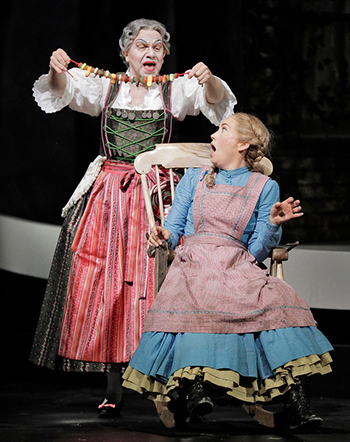 The settings, starting with a beautiful scrim inspired from a photograph of a rustic scene, and many clever details add charm and wit to the stage picture. From the cuckoo clock atop the proscenium to the big glowing cherry and inserted cake knife on the roof of the witch's house (right out of Hitchcock's "Psycho"), the show has a magical look. The costumes are attractive, and lighting by original designer Lucy Carter, reproduced for the revival by Neill Brinkworth, is wonderfully inventive. Using the auditorium's iconic starburst chandelier for a strobe effect in the Witch's Ride was one of many surprises. All of McDonald's team (himself included), associate stage director Danielle Urbas, associate set designer Ricardo Pardo, lighting designers Carter and Brinkworth, and choreographer Lucy Burge (just enough cuteness), are making their SFO debuts.

I could have lived without the pantomime dream sequence at the end of Act II, when McDonald makes a mash-up of Sondheim's "Into the Woods" characters like Red Riding Hood and the Wolf, and Rapunzel, with Disneyesque Princesses Cinderella and Snow White, and another more obscure character from the Grimms, Rumpelstiltskin. He stopped my grumping with an inspired depiction of the angels guarding the sleeping children. The kindly Sandman portrayed by excellent current Adler Fellow mezzo-soprano Ashley Dixon, and his graceful assistant Will-o'-the-wisp (dancer Chiharu Shibata), dangled a chain of paper dolls above them as silver glitter softly fell. It was a simple enchanting moment.

After an intermission stroll through the lobby decorated with seasonal greenery, the audience, which included a gratifying number of respectfully absorbed young people, returned for the big showdown with Rosina Lickspittle, the Witch.

Another current Adler Fellow, soprano Natalie Image, opened Act III as a radiant Dew Fairy, and set a positive tone, but it wasn't long before pervy old Rosina made her entrance. In the spirit of a British Christmastime "panto," talented character actor tenor Robert Brubaker played her in drag — at first. Then McDonald had him strip off the skirt and blouse and toss the wig, until he looked like Michael Cerveris as Sweeney Todd. That was scary, but I doubt many understood the motivation. Brubaker could have hammed it up but didn't, and his vocal articulation was amazing considering the physical demands. He just wasn't very funny. He will doubtless relax into the sheer silliness of the part as the run goes on.

Mezzo-soprano Michaela Martens and bass-baritone Alfred Walker as the titular siblings' parents were both in rich voice. Their sympathetic characterizations minimized the mother's borderline abusiveness and the father's drunkenness. We only wished they had more to sing.

Mezzo-soprano Sasha Cooke as Hansel and soprano Heidi Stober as Gretel seem ideally cast. Cooke is becoming adept at playing boys, but her spot-on (and adorable) portrayal could not mask the richness and flexibility of her voice. Stober has added warmth to her bright tone, and her acting is unforced and convincing. The youngsters in the audience had no trouble suspending their disbelief, and the adults were also happy to see the kids are all right by final curtain.