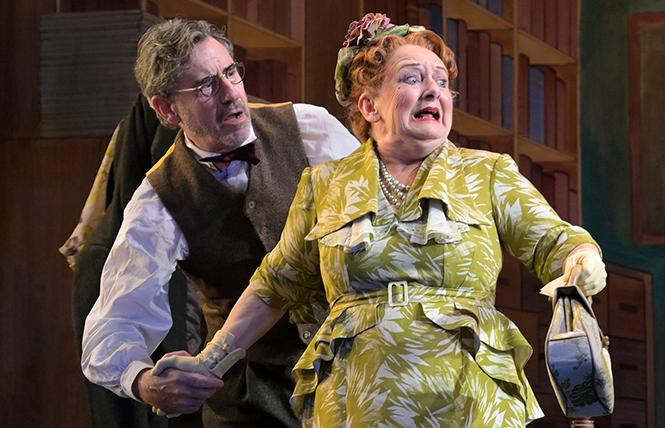 You'd need an awfully thick skin to resist being tickled by the production of "Rhinoceros," Eugene Ionesco's 1959 classic now at the American Conservatory Theater. Under the crisp direction of Tony-winning director Frank Galati, who has judiciously trimmed Derek Prouse's translation from the French, the evening charges by in a light-footed 90 minutes, stressing Romanian-born Ionesco's absurdist comedy at least as much as his sociopolitical commentary.

The takeover and transformation of a provincial French town by the play's titular beasts, originally interpreted to reflect the rise of Fascism prior to WWII, is metaphorically apropos once again in today's political climate. It's a delicious coincidence that the script frequently refers to rhinoceroses as "pachyderms," a taxonomy that also embraces the grand old elephant. But despite a few over-emphatic directorial elbow jabs — the addition of the phrase "fake news"; a brief second-act sag into the didactic — the production generally allows the play's darkness to serve as undertow beneath a sparkling comic surface.

The play is anchored by two tours de force of odd couple antagonism between unlikely old friends, haggard Berenger (David Breitbarth), an unmotivated newspaper clerk prone to daydrinking and romantic fantasies; and dapper Gene (Matt DeCaro), a well-to-do businessman quick to offer condescending advice and judgment. Breitbarth's slow speech and slouchy postures as Berenger are the perfect foil for DeCaro's fussbudget mannerisms as Gene, who squares his shoulders so frequently it makes propriety look like compulsion.

Their first round of quibbling takes place outside a small café in their sleepy South-of-France village. Scenic designer Robert Perdziola's painted cloth backdrop cleverly underscores not only the play's setting, but also its vaudevillian style. In the midst of Gene's pompous dispensation of buck-up and bear-down bromides, the first rhinoceros arrives in town, providing him a hardly-needed bonus opportunity to rail against the world's dishevelment and dismiss the relevance of anything but the status quo.

By the time this pair meets again, rhinocerosity is becoming the status quo. One by one, their fellow townsfolk have been transforming into the heavy-breathing beasts (Joseph Cerqua's sinister sound design creates a slowly building atmosphere of rumbles, snorts and stampeding footfall). When Berenger visits Gene at home, he discovers his friend mid-metamorphosis. DeCaro is fantastic here, doing a bravura Bruce-Banner-hulks-out routine unaided by CGI or makeup effects. He curls his hands into hooves, hunches forward as a prodigious belly slips free of his dandy smoking jacket, drops his voice to a guttural growl, and winces, sensing a horn erupting from his forehead.

Ionesco refuses to deliver a message as pointed as a rhino's bony protuberance. While he writes Gene as the sort of fellow who might voluntarily switch sides in an argument in order to stay in sync with a dominant majority, he also suggests that his transformation is symptomatic of a sickness. When Berenger arrives, Gene has taken to his bed; he howls in discomfort throughout his shape-shifting, sometimes whiplashing from rhino back to human mode, as if trying to break the pull of a malevolent force.

This ambiguity also permeates an earlier scene in Berenger's newspaper office, where his colleagues double-talk their way around the rhinos' takeover, denying their presence at all, declaring their threat a hoax, acknowledging their existence but diminishing their importance, condemning them, defending against them, admiring them, becoming them. Danny Scheie works a prissy, adenoidal voice to superb comic effect playing supercilious bureau chief Mr. Papillon, and Jomar Tagatac is smug perfection as Mr. Botard, another functionary who cavalierly spins 180-degree turns around his own opinions. Whether these characters' shifts of opinion come out of slippery self-defense, willful obliviousness or a combination of the two is left purposely unclear. The funniest — and, in retrospect, most provocative — change of perspective belongs to Mrs. Boeuf (Trish Mulholland), the high-strung wife of a columnist who has been pursued through the town by a rhino. She storms the office in a lather, condemning the horrible monsters. But when, in short order, she discovers her husband has become one of them, she suddenly changes her tune, falling (literally, through the floor) in love with him anew, and riding off into the sunset atop her rhino-amour's broad back (designer Perdziola delivers two ridiculously entertaining visual effects in this sequence).

The joy of Ionesco's playful script is the permission it gives the audience to juggle multiple possibilities and puzzle over meaning. When, in the final scene, surrounded by rhinoceroses dressed as people, Berenger, the last man standing, exclaims, "I will not capitulate!," he seems at once noble and foolish. This critic decided not to capitulate to what audience chatter and promotional materials suggest is the dominant, oversimplified interpretation of the "Rhinoceros." Certainly the play offers its share of allegory, but its willingness to be silly and embrace the non-sequitur provides another valuable lesson on surviving through troubled times.