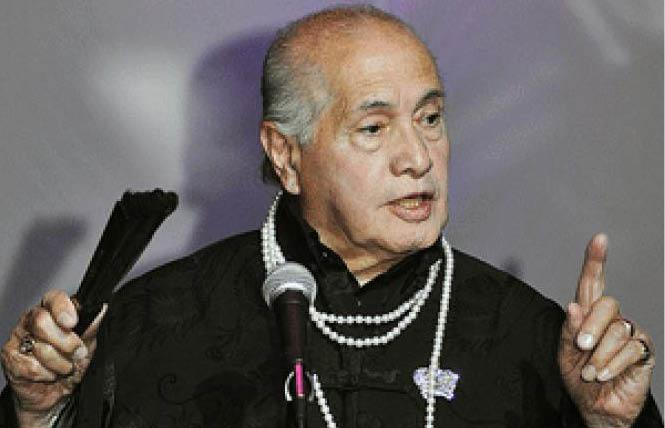 Jose Julio Sarria addressed the Harvey Milk LGBTQ Democratic Club in May 2012 after accepting an award from the political group. (Photo: Rick Gerharter)

As the Political Notebook reported May 9, LGBT community leaders across the Golden State launched an effort to see Sarria be named to the hall in 2015 due to it being the 50th anniversary of the Imperial Court System. Sarria established the court in San Francisco, and it became a major LGBT philanthropic group throughout North America.

With Newsom's election last November, friends of Sarria have renewed their efforts to see him be honored in such a way. A trio of members of the Legislative LGBTQ Caucus — chair gay state Senator Scott Wiener (D-San Francisco), vice chair gay Assemblyman Todd Gloria (D-San Diego), and lesbian state Senate Speaker Pro Tempore Toni Atkins (D-San Diego) — are co-chairing the campaign and recently had a positive discussion with Newsom about why Sarria deserves such recognition.

Supervisors Aaron Peskin, Vallie Brown, Catherine Stefani, Sandra Lee Fewer, Norman Yee and Gordon Mar all signed on as co-sponsors of the resolution, which hailed Sarria for being "a vocal critic of the criminalization of queer people and queer meeting places, and would promote a groundbreaking sense of gay pride and positive gay identity in performances at gay establishments such as the Black Cat Cafe in North Beach."