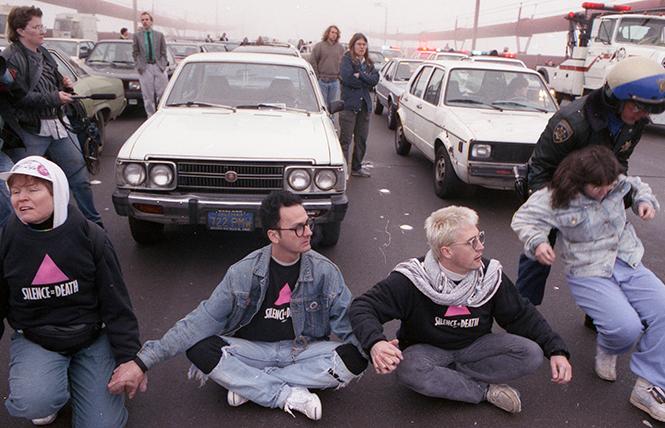 There couldn't be a better moment than this for "Queer California: Untold Stories," an original exhibition at OMCA that wears its inclusive spirit proudly on its sleeve as it attempts to bring multiple facets of LGBTQ+ cultural, artistic and political history to light. The emphasis is on "attempts," because one can't help coming away from this well-intentioned show without feeling it's both too much and too little. Lacking a coherent narrative thrust, despite or because of the participation of many curators, it's a lot of stuff without enough substance, a grab bag of costumes, news clippings, short films and videos, personal accounts, nightlife and motorcycle club regalia, and landmark objects like the 1978 prototype of Gilbert Baker's Rainbow Flag. In the fun department there's the flashy blue sequined jacket worn by Sylvester, the flamboyant reigning "queen of disco" in the late 1970s and early 80s. One can trip back in time and visualize the strobe-lit dance scene, the singer's trademark falsetto soaring above the propulsive beat of "You Make Me Feel (Mighty Real)." It helps that the song is piped into the gallery. "He was black, gay and some form of gender queer before there was that term," Sylvester biographer Joshua Gamson said. "Things that were the basis for marginalization, he turned into superstardom." The L.A.-born sensation moved to San Francisco at 22, joined the Cockettes, and later befriended Harvey Milk, performing at Milk's birthday party in 1978. A beloved fixture at the Elephant Walk gay bar in the Castro, Sylvester would die of AIDS a decade later. 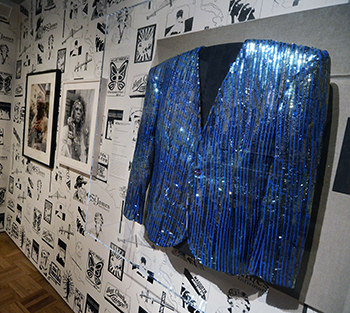 A sequined jacket worn by Sylvester and paintings on the back wall by Jerome Caja are included in Oakland Museums Queer California: Untold Stories. Photo: Rick Gerharter

The paucity of artworks by LGBTQ+ artists, otherwise well-represented in the museum's collection, is a disappointment. Whether that choice was due to the show's overly broad concept or OMCA's split personality as both a fine art and California history institution is anyone's guess. The most memorable artistic contributions come from photographers such as the late Chicana artist Laura Aguilar, who died last year. Known for directness and empathy with her subjects, she turned the camera on herself for a series of liberating, nude, black-and-white self-portraits shot in wild California landscapes. Aguilar's images challenge mainstream perceptions of beauty, race and queerness while revealing anxieties and feelings of vulnerability related to her lesbian sexuality and body size. After discovering butch cowboy archetypes from the 1978 film "Hard Rocks" in a gay porn shop in the Tenderloin, Torreya Cummings recalls inviting a group of "fellow queers" to gather and get-it-on for the camera in the desert and "put ourselves in those roles, once, twice, three times removed and let them shift to accommodate us." The resulting pictures are playful, raunchy and irreverent. In a more serious vein, L.A artist Cassils sculpts their transmasculine physique through rigorous fitness regimens played out in performance. "Becoming an Image" (2012-present), part of a project aimed at stemming violence against trans and gender-non-conforming people, features a suite of moody, dramatically lit photographs, exhibited in a darkened anteroom. They document Cassils pounding a large mound of clay into submission in front of an audience, a towering example of nude classical statuary hovering in the background.

Listed in bold print on a wall entitled "What We're Called" is a glossary of some terms, 27 in all here, used to describe a range of sexuality and ways of being in the world. It's just steps away from the exhibition's most engaging installation: a timeline from the days of early California through the present. It extends from floor to ceiling and runs the entire length of a back wall displaying posters, photographs, announcements, documents and blue cards detailing the opening and shuttering of popular gathering spots, and seminal events big and small. Included are dates of importance like the first airing of "Queer Eye for the Straight Guy" on Bravo (2003); the 1983 closing of the Castro's S/M bathhouse The Hothouse amid the specter of AIDS; the creation of the AIDS Memorial Quilt: The Names Project; the release of "Tongues Untied," Marlon Riggs' powerful 1991 film affirming black gay identity; the establishment in 1965 of the Imperial Court by Absolute Empress de San Francisco, Jose Sarria; and the founding of the direct action group ACT UP in New York City in 1987; among many others. Milestones like the 2015 Supreme Court ruling legalizing same-sex marriage are noted (two years later, Trump would ignore Pride month — what a guy!) as well as setbacks such as the government's installation last year of the dubiously named Division of Conscience and Religious Freedom, which essentially gave HHS medical personnel license to discriminate against LGBTQ+ people. Nestled amidst the famous ups and downs and little-known tidbits about lesser-known things are some savage facts, perhaps none more so than those pertaining to the abhorrent eugenics laws legalized in 1909. Designed to institutionalize and control the reproductive freedom of people deemed deviant, they allowed forced sterilization, and remained on the books until 1979. Barbarous surgical procedures were performed in state hospitals without consent on patients suspected of "perversion." Masturbation, same-sex sexual relationships, transgenderism and cross-dressing were considered justifiable grounds for the operation, with Hispanic women in California unjustly singled out for their supposed immorality and promiscuity.

The past can make for disturbing reading. Here's to brighter days ahead.