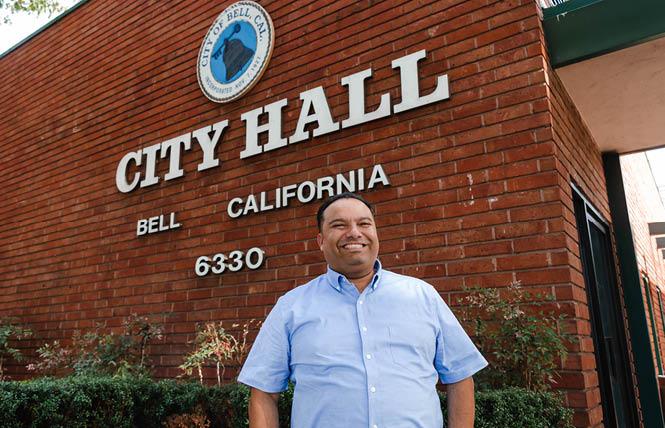 It turns out a gay mayor in southern California will compete for the state Senate seat vacated by gay lawmaker Ricardo Lara last month when he took his oath of office as state insurance commissioner. It just isn't the mayor most people had expected would seek to succeed Lara.

All last year speculation had swirled around Long Beach Mayor Robert Garcia and if he would jump into the special election for the 33rd State Senatorial District. Yet, in November, Garcia had signaled he wasn't interested in the race and the following month endorsed Long Beach City Councilwoman Lena Gonzalez.

Since then, Gonzalez has racked up numerous endorsements from local and state leaders, including Lara himself. And it had increasingly looked like no LGBT candidate would run against her.

But that changed Thursday, January 24, when José Luis Solache officially announced his candidacy. A gay man first elected to the Lynwood City Council in 2013, he is currently serving his third term as mayor, which rotates among the council members.

"Part of my focus will be seeing that, the voices of the people I represent in the district, we bring those voices to Sacramento rather than Sacramento coming to us. I want to be their voice," said Solache, who has been with his partner, Jason Marquez, a flight attendant, for 10 years.

Solache, 38, spoke to the Bay Area Reporter by phone Thursday, January 31, from Sacramento. He was making the rounds in the state capital to introduce himself to legislators and others as he sought out their endorsements and support. He plans to seek the backing of statewide LGBT advocacy organization Equality California, the LGBT Latino led HONOR PAC, and the national LGBTQ Victory Fund, which aims to elect out candidates to public office across the country.

"As the only member of the LGBT community in this race, I look forward to having their endorsements and being a champion for issues that matter to our community," said Solache.

The departure of Lara, the first out LGBT person elected to statewide office in California, from the Legislature resulted in the LGBT caucus seeing its membership fall from a high of eight members to now seven. In mid-January gay state Senator Scott Wiener (D-San Francisco) endorsed Gonzalez shortly after becoming chair of the Legislative LGBT Caucus.

"Lena Gonzalez will be a great addition to the California State Senate," he stated. "As a member of the Long Beach City Council, Lena has led the way to streamline the processes for approval of new housing. As a result, Lena's council district has three thousand units already entitled and ready to be built."

In announcing Wiener's support of her Senate bid, Gonzalez stated, "as the new chair of the Legislature's LGBT caucus, his endorsement is extra special for me. I have always prided myself in being the biggest ally possible for the LGBT community."

None of the three LGBT groups has yet to endorse in the race. Mario Ceballos, a gay man who is president of HONOR PAC, told the B.A.R. he could not comment on the group's endorsement process or the individual candidates in the race other than to say the group "will give serious consideration to any candidate interested in our endorsement and who completes our endorsement application by the established deadline."

Candidates had until 5 p.m. Friday, February 1, to do so. The primary election will be held March 26. If no candidate receives more than 50 percent of the vote, then the top two vote-getters will advance to the June 4 special election.

As for Solache's decision to enter the race, Ceballos told the B.A.R. that, "HONOR PAC always welcomes and looks forward to considering open LGBTQ Latinx candidates running for elected office as well as others committed to HONOR PAC's mission and full equality for all."

Solache grew up in Lynwood in a one-bedroom apartment with his sibling, parents, uncle, and grandmother. The four adults had all immigrated to the U.S. from Leon, a city in the Mexican state of Guanajuato. His mother worked for the cosmetics company Avon and his father was a blue-collar factory worker.

"I for sure did not grow up privileged. I worked very hard," said Solache, who graduated from California State University-Dominguez Hills with a bachelor's degree in liberal studies and earned his master's at the University of Southern California.

Hired last year as president and CEO of the Greater Lakewood Chamber of Commerce, Solache first entered politics in college, serving as president of his campus' student body and chair of the California State Student Association.

In 2003, he was elected as the youngest Latino board member of the Lynwood Unified School District. He twice won re-election to his school board seat before being elected to the City Council.

He came out publicly during his 2011 school board race. Solache credits the training he received from the Victory Fund for preparing him to run as an out candidate. He included the logo of the group, as well as that of the HONOR PAC, on his campaign mailers having won both groups' endorsement.

"That was so empowering to me as someone who didn't run in the past as an openly gay man," he said of the five-day training he took part in. "So the Victory Fund was definitely instrumental in me acknowledging being a member of the LGBT community."

Long Beach City Councilman Al Austin II had filed but abruptly dropped out of the race Friday, saying he wanted to instead focus on local issues since there were several "good Democratic candidates in the race." It further boosted expectations that Gonzalez is the one to beat in the race, as Long Beach has a significant voter base in the district.

Nonetheless, Solache said he intends to "fight for votes" in Long Beach and every city he is looking to represent.

"I never see myself as running against anyone; I am running for state Senate," said Solache. "I will let everyone else running focus on their campaign. I am only focused on mine and being the next gay state senator of this state."