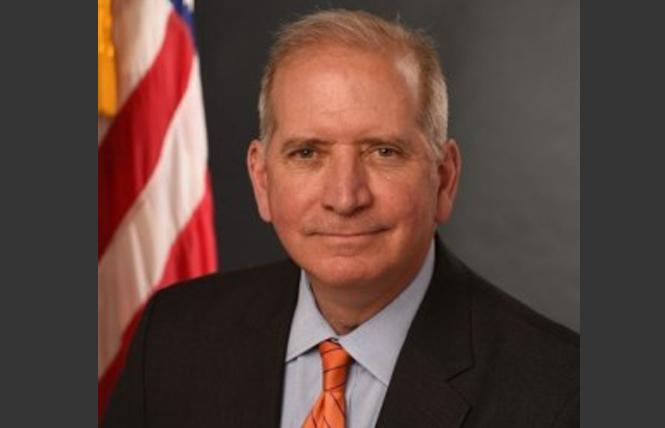 The Trump administration has given foster care agencies in South Carolina a green light to discriminate based on religion, an action that LGBT legal activists say will likely harm LGBT youth and prospective parents who are in same-sex relationships.

The action came in the long-running conflict between faith-based groups and laws prohibiting discrimination. The U.S. Department of Health and Human Services on January 23 weighed in for the faith-based groups.

In a letter to the governor of South Carolina, an HHS official granted a waiver that significantly undermines the federal department's existing policy against federal funds going to organizations that discriminate based on religion, sexual orientation, gender identity, and other characteristics.

The waiver is the latest volley in a long-standing dispute between faith-based organizations who want government funds but don't want to abide by government rules concerning non-discrimination. It's also an effort by the Trump administration to undermine a pro-LGBT policy instituted under the Obama administration.

In the letter to South Carolina Governor Henry McMaster, HHS Principal Deputy Assistant Secretary Steven Wagner granted South Carolina the right to funnel federal grant money to foster care agencies in the state even if the groups violate an HHS regulation that prohibits discrimination based on religion. A Christian-run foster care group called Miracle Hill, which has discriminated based on religion and sexual orientation, prompted the request for an exemption to the regulation.

The HHS regulation at the center of the controversy states that, "It is a public policy requirement of HHS that no person otherwise eligible will be excluded from participation in ... or subjected to discrimination in the administration of HHS programs and services based on non-merit factors such as age, disability, sex, race, color, national origin, religion, gender identity, or sexual orientation. Recipients must comply with this public policy requirement in the administration of programs supported by HHS awards."

In granting the exemption to South Carolina, Wagner noted that the federal Foster Care Program Statute prohibits discrimination on the basis of only race, color, or national origin. Wagner's letter also noted that the state's chief legal counsel agreed "the request for an exception was narrowed to the religious non-discrimination provision."

"Please note that this exception does not relieve the S.C. Foster Care Program of its obligation to comply with any other requirements" of the HHS policy, wrote Wagner.

LGBT legal experts were critical of the decision.

"That is an important narrowing as a legal matter, but unfortunately, it probably won't reduce the discrimination [against LGBT people] as a practical matter," said Jenny Pizer of Lambda Legal Defense and Education Fund. "Based on what's happened in the past, we think it's highly likely that Miracle Hill will continue to turn away LGBT prospective parents regardless of the parents' religion — that is, even if they identify as born again Christians. And then Miracle Hill will argue that they are entitled to refuse any prospective parents who don't comply with [their] condemnation of same-sex relationships and views about gender identity."

Long-simmering conflict
The conflict between faith-based organizations providing foster care and laws and policies prohibiting discrimination based on sexual orientation has been going on for more than a decade. Catholic Charities in Massachusetts, Illinois, Washington, D.C., and several cities have chosen to shut down their foster care services rather than obey the state and local non-discrimination laws. In San Francisco, Catholic Charities several years ago scaled back its adoption services, and said it would not allow same-sex parents to adopt.

In Michigan, lesbian state Attorney General Dana Nessel announced last week that she would attempt to broker a settlement between a lesbian couple who seeks to adopt children and foster care agencies who refuse to consider their application. Michigan and nine other states have laws permitting foster care agencies to discriminate against same-sex couples.

A 2006 report by the Evan B. Donaldson Adoption Institute found that one-third of child welfare agencies in the U.S. rejected applications from prospective parents because they are lesbian, gay, or bisexual. Lorri L. Jean, executive director of the Los Angeles LGBT Center, said a study commissioned by her group found that nearly 20 percent of youth in need of foster care identify as LGBT.

In 2011 under the Obama administration, HHS issued a memo encouraging child welfare agencies to better serve LGBT youth and better utilize LGBT prospective parents. But just days after President Donald Trump's inauguration, a purported draft for an executive order was leaked that sought to prohibit the federal government from taking "any adverse action against a religious organization that provides federally-funded child-welfare services, including promoting and providing adoption, foster, or family support services for children ... on the basis that the organization declines to provide ... such services due to a conflict with the organization's religious beliefs."

Wagner's letter indicated HHS was responding to a letter from the governor in February of last year asking for an exception from an HHS regulation that prohibits foster care organizations receiving federal funding from discriminating based on religion. McMaster's letter informed HHS that South Carolina would have "difficulty" finding homes for children in foster care unless it could rely on "certain faith-based organizations" and that the existing HHS policy forced such faith-based organizations to "abandon their religious beliefs" in order to receive federal funding. McMaster apparently argued that the HHS non-discrimination policy violated the federal Religious Freedom Restoration Act.

RFRA is a statute that prohibits government from imposing a "substantial burden" on the free exercise of religion without identifying a "compelling" need to do so. It also states that the federal government must not take any adverse action against an individual or religious organization because that organization has "spoken about moral or political issues from a religious perspective."

"Those of you who are faith-based foster and adoption agencies," said Royce, a former Family Research Council official and now director of HHS's Center for Faith and Opportunity Initiatives, "... and there is something that you believe substantially burdens your religious expression, we would encourage you to file a request for religious accommodation" under RFRA.