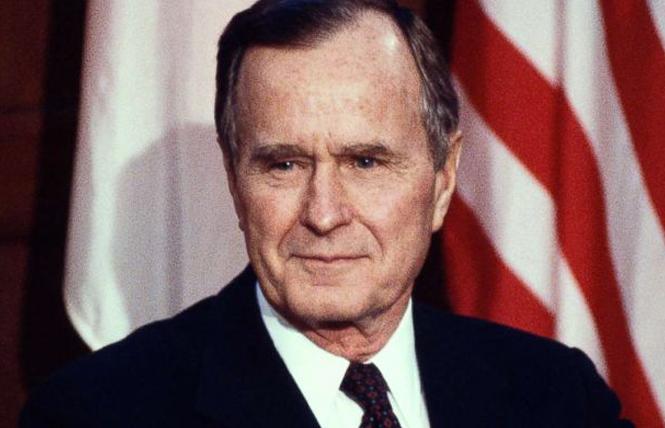 When the LGBT community thinks back on the life of President George H.W. Bush, its view of the decorated war hero and gentleman politician who spent years in the service of the nation is obscured.

For the LGBT community, Bush left a mixed legacy. He did not do all he had the power to do to save the lives in a community ravaged by the deadly AIDS epidemic. But he did not obstruct the enactment of important legislation to bring some help to that community. And, like with so many others in public life, his feelings evolved over time from a place of hostility and disinterest in the LGBT community to a kinder, gentler place of acceptance.

There will be many remembrances of Bush this week. His national funeral took place in Washington, D.C., and his remains will be interred at his presidential museum in College Station, Texas. President Donald Trump declared Wednesday, December 5, a national day of mourning for Bush, who died November 30 at the age of 94 from a form of Parkinson's disease caused by strokes.

During his years in power, first as vice president under President Ronald Reagan for two terms then as president himself for one term, Bush generally opposed equal rights for LGBT people and people with HIV.

As president, from 1989 to 1992, Bush was accused by many civil rights activists of trying hard to appease such anti-LGBT figures as U.S. Senator Jesse Helms and other members of the far right religious base of the Republican Party.

Urvashi Vaid, who headed up what was then called the National Gay and Lesbian Task Force during the same years Bush was in the White House, recalled Washington, D.C. as having a "very hostile climate politically for LGBT people."

"It was not as bad as the Reagan years," said Vaid, "because we had a Democratic Congress we were able to work with legislatively. But the Bush administration was not our friend, it was not welcoming, and we did not have access, at least not at the front door."

And the Bush term "ended so badly," recalled Vaid, with Bush "giving Pat Buchanan a platform at the Republican National Convention — even Log Cabin didn't endorse him."

Vaid and Jeff Levi, who was the first full-time AIDS lobbyist during the Bush years, said some people give Bush too much credit for having signed the Ryan White CARE Act, the Americans with Disabilities Act, and the Hate Crimes Statistics Act. They note the legislation passed largely thanks to a Democratic Congress.

"The CARE Act was totally driven by Congress and the AIDS community," said Levi. "It's good he signed it, but there was no initiative coming from his administration for it." Congress, he noted, had to routinely increase the budget for AIDS that Bush proposed.

This reporter recalls the Bush administration touting an unusually high dollar amount as its "AIDS spending" proposal. But on further scrutiny, it became clear the proposal was inflated by counting funds spent through mandatory entitlement programs (for people on disability) as money spent on fighting AIDS.

As the ADA was winding its way through Congress, Bush spoke in favor of the law prohibiting discrimination against people with HIV.

But two years later, during a re-election campaign debate, he blamed AIDS on "behavior."

In an interview with the New York Times that same year, Bush bluntly stated, "I can't accept as normal lifestyle people of the same sex being parents. I'm very sorry. I don't accept that as normal ... I don't approve of that."

He appointed a lesbian, Anne Radice, to a prominent, albeit temporary, position as chair of the National Endowment for the Arts.

But during his re-election, the Bush campaign demoted a gay employee, Tyler Franz, after he criticized the Republican Party for its increasing hostility toward gay people. The campaign denied demoting him for being gay. And while Franz specifically did not blame Bush, he said senior campaign officials used crude anti-gay rhetoric and that he "overheard anti-gay statements ... throughout the campaign."

Jon Meacham's Bush biography "Destiny and Power: The American Odyssey of George Herbert Walker Bush" said Bush, in a 1988 audio diary entry, said he believed Americans "don't want homosexual marriages codified." But in 2013, the former president actively solicited an invitation to the marriage ceremony of a lesbian couple in his summer residence town of Kennebunkport, Maine.

Helen Thorgalsen told New England Cable News, "When we were getting ready to get married, he kept asking where his invitation was. He was happy when he got his invitation." The couple not only sent Bush an invitation but asked him to serve as one of their official witnesses.

"I always felt he was an honorable person," said Rich Tafel, who founded Log Cabin Republicans and still serves on its board of directors.

"In the early years of his administration, I remember being hopeful as Bush signed the ADA, which protected people with AIDS from discrimination. He also signed the Hate Crimes Statistics Act. Also, Barbara showed symbolic support when she lit a candle in the White House window for PFLAG and held a baby with AIDS," Tafel added, referring to Bush's wife, who died in April.

But the Republican Party's embrace of such right-wing figures as Buchanan and Pat Robertson during the re-election campaign triggered a significant "shift" for Tafel.

"Sadly, the last period of the Bush presidency was marred by his outreach to hateful anti-gay forces," said Tafel. While Log Cabin had considered supporting Bush for re-election, it "instead found ourselves in aggressive opposition to the Bush-Quayle campaign's sellout to the anti-gay forces in the GOP."

"I believe he was a decent man who found these issues new and challenging, but he sold out his principles by turning his campaign over to the Buchanan, [Jerry] Falwell, and Robertson forces," said Tafel. "Had he remained a kinder, gentler president, I think he'd have been truer to himself."

During his presidency, Bush appointed Vaughn Walker as a federal district court judge. Many LGBT people and supporters criticized the nomination at the time because they believed Walker to be hostile to gays. Walker famously presided over the trial in San Francisco against Proposition 8, a 2008 ballot measure that repealed the right of same-sex couples to marry in California. Walker ultimately ruled the ballot measure to be unconstitutional. He retired one year later, in 2011, and acknowledged he was gay.