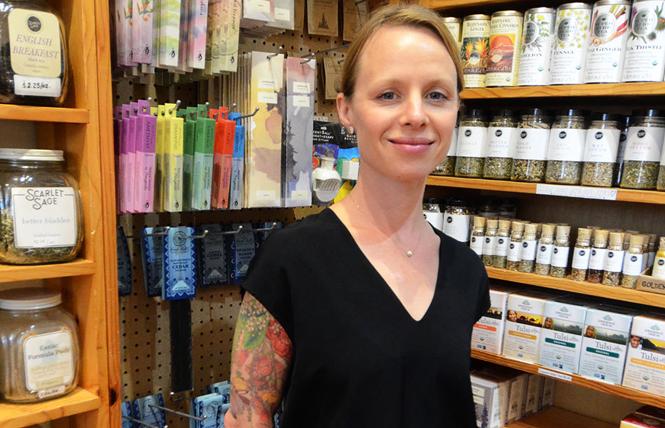 For 23 years the Scarlet Sage Herb Co. has supplied San Francisco residents with holistic treatments to remedy all manner of ills, aches, and pains. Now, under new ownership, it has expanded in order to offer more classes ranging from mindfulness and broom making workshops to astrology certification and spiritual cleansings.

Three years ago Laura Ash bought the Valencia Street store from business and life partners Lisa Kellman and Dino Lucas. Ash, 38, who is a queer mother of two, had worked there in 2006 while attending the California School of Herbal Studies in Sonoma.

"It has always been owned by gay women," said Ash, whose partner is a woman who works for a local film company.

Ash had been living in Madison, Wisconsin after divorcing her husband. But when he moved back to the Bay Area, she decided to also relocate in order for her children to be near their father. Tensing, 8, which means illustrious in Tibetan, and Zenaida, 5, named after the first female physician in Greece in 1 A.D., both attend the Harvey Milk Civil Rights Academy public school in the Castro.

When she returned to San Francisco, Ash discovered that the former owners of the herbal apothecary had hired a broker in hopes of selling the business. Within three months she had secured a loan from the Small Business Administration in order to purchase the store, which carries more than 10,000 products from more than 300 companies.

"It's a lot to fit into a little store," said Ash, a clinical herbalist who offers personalized consultations for customers. "But we have a lot of little bottles and plenty of shelves to fill."

Two years ago Ash launched a website in order to sell the store's in-house line of products of herbal supplements, body lotions, oils, herbal teas, and powders. The Scarlet Sage releases a new product every other month and now carries more than 165 under its own label. Overseeing the production is Rachel Farinelli Vita, the store's apothecary manager since February 2015.

In late October she debuted a new Cacao Power powder ($29.95 for 4 ounces), the Scarlet Sage's version of a hot chocolate that is made from all organic and vegan ingredients with cayenne for a spicy kick. Another powder she created is called Golden Milk ($22.95 for 4 ounces) and features turmeric as a key ingredient.

"It is the perfect thing to drink before bed," said Farinelli Vita, who is queer and moved from Boulder, Colorado to be with her wife in San Francisco.

She had her own apothecary and certified herb garden there and often led new moon healing circles. A self described "mountain girl," Farinelli Vita said her new hometown "is a great place to be queer and a herbalist and a healer," though she admitted she does "look for the day when I can be surrounded by trees again."

With educating others in traditional healing arts "a passion" for Ash, it prompted her to want to revive offering classes to customers of the store. The Scarlet Sage had last held classes a decade ago, she said. As she sought out an additional space, her landlord called to say the nail and waxing salon in a basement space under the store would be closing.

She immediately said yes to taking over the 1,000 square foot subterranean space so that she wouldn't have to close the 1,300 square foot upstairs store in order to hold daytime events and classes. An Indiegogo campaign raised $6,733 for the expansion, which formally opened in July under the moniker the Scarlet Sage Wellness Space. Ash also operates her Scarlet Sage School of Traditional Healing Arts out of the expansion area.

While promotional materials described the new space as a "witchy speakeasy," it more resembles a sleek artist gallery. The walls are painted a soft white and are sparsely decorated, with a small sink in one corner that is set up for use as a demonstration area. The response, so far, has been positive from customers, with more course options to be added in the coming year.

For the holidays, the store is once again hosting a Winter Solstice Gathering from 7:30 to 9:30 p.m. Friday, December 21, to usher in the longest night of the year. Mulled wine and medicinal herbal cordials will be on offer as attendees celebrate the Festival of Lights, a traditional Scandinavian pagan ceremony marking the sun's birth.

The Scarlet Sage is located at 1193 Valencia Street. For more information about its classes and product line, visit its website at https://scarletsage.com/.

Castro Merchants deck the 'hood
This will be the last year to see the 28 foot tall Christmas tree that is annually set up in front of the Bank of America building at the corner of Castro and 18th Streets, as it is to be exchanged for a brand new version — likely with LED, programmable lights — for the 2019 holiday season.

"Next year the tree will need to be replaced," Daniel Bergerac, president of the Castro Merchants, announced at the business association's November members meeting.

The group will host its traditional tree lighting ceremony at 6 p.m. Monday, November 26. All the usual invited guests should be in attendance, from Santa and his sexy elves to the San Francisco Lesbian/Gay Freedom Band and members of community choruses.

For the 11th year running Cliff's Variety will give customers 20 percent off their purchases Friday, November 23, through Sunday, November 25, if they donate $5 or more to the Harvey Milk Civil Rights Academy.

A menorah lighting ceremony, now in its fourth year, will take place at 6 p.m. Wednesday, December 5, at Jane Warner Plaza, the parklet at the intersection of Castro, Market, and 17th streets. Castro Merchants and Congregation Sha'ar Zahav co-host the increasingly popular event.

LGBT market returns to SF center
The Queer Street Marketplace, timed to take advantage of the holiday shopping season, will return Saturday, December 1, to the San Francisco LGBT Community Center located at 1800 Market Street. Local LGBTQ-owned businesses, from clothiers and home décor makers to food purveyors, take over the facility from 10 a.m. to 4 p.m. that day to sell their wares.

Interested vendors have until Thursday, November 15, to submit an application. For more information, visit https://bit.ly/2QklWox.