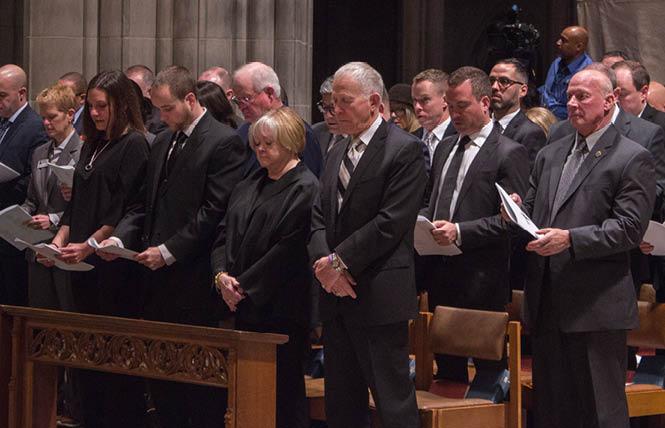 Judy and Dennis Shepard stand during the interment service for their son, Matthew, who was murdered 20 years ago. Photo: Courtesy Mwano Production

Twenty years after being brutally beaten and left for dead, Matthew Shepard's remains were interred at the Washington National Cathedral Friday, October 26.

The 21-year-old gay college student was tied to a fence near Laramie, Wyoming and left for 18 hours before dying five days later in a hospital. (Aaron McKinney and Russell Henderson were charged with murder. Henderson pleaded guilty; McKinney was found guilty at trial. Both are serving life terms without the possibility of parole.)

More than 2,000 people gathered at the Episcopal cathedral in Washington, D.C. to mourn and remember Shepard's death, which became a national symbol for the hatred and discrimination the LGBT community face. It was a pivotal event in helping shape the continuation of the gay rights movement throughout the country. Shepard's name is attached to the federal hate crimes bill that was also named for James Byrd Jr., a black man who was dragged to death in a racist crime in Texas.

"It was remarkable," Jason Marsden, executive director of the Matthew Shepard Foundation, said of the ceremony. "It was just so beautiful, a reunion of friends and family of Matt's and thousands of people who just had goodwill in their hearts."

Marsden said the ceremony gave closure to the horrific 1998 incident for many and said it differed greatly from Shepard's first funeral where anti-gay protesters picketed and others loudly condemned the attack.

The Reverend Gene Robinson, the first openly gay priest to be consecrated a bishop in the Episcopal Church, spoke to the crowd during the ceremony. The church, the second-largest cathedral in the country, is not just a resting place for Shepard's ashes, but now a touchstone for the LGBT community, Robinson, who is now retired, said.

Shepard's parents, Judy and Dennis Shepard, became advocates for the LGBT community after their son's brutal murder. They spoke about the upcoming 20th anniversary of his killing in September at the conference of NLGJA: The Association of LGBTQ Journalists.

"It's a bigger window now," Judy Shepard said at the conference. "I thought two years would be the maximum people would remember Matt's story. We thought after 20 years we wouldn't have to do this work."

Dennis Shepard said one of the frustrating things to him is that dads who are survivors of hate violence often don't speak out afterward.

"In all the time I've been doing this, I only met one other father — his daughter was transgender," Dennis Shepard, who retired in 2009, said. "It's frustrating to me."

Ahead of last week's interment, the Shepards said they found the perfect place for their son's ashes in the cathedral.

"We've given much thought to Matt's final resting place, and we found the Washington National Cathedral is an ideal choice, as Matt loved the Episcopal Church and felt welcomed by his church in Wyoming," said Judy Shepard in a news release. "For the past 20 years, we have shared Matt's story with the world. It's reassuring to know he now will rest in a sacred spot where folks can come to reflect on creating a safer, kinder world."

"It's so important that we now have a home for Matthew," Dennis Shepard said to begin the 90-minute ceremony, according to the Associated Press. "A home that others can visit, a home that is safe from haters, a home that he loved dearly."

The Shepards also made a donation to the Smithsonian's National Museum of American History. They gave personal papers highlighting Matthew's school life from elementary through college, theater scripts, photographs, correspondence and notebooks, as well as a number of objects, including a child-sized Superman cape, sandals, a wedding ring, and purple ribbon award, according to a news release.

Throughout the interment, there were reminders of the continued hate and violence LGBT people face today, Marsden noted. In 2009, former President Barack Obama signed the Matthew Shepard and James Byrd Jr. Hate Crimes Prevention Act, which expanded the federal law to include crimes committed due to a victim's sexual orientation or gender identity. Today, President Donald Trump has rolled out a plan to ban transgender individuals from serving in the U.S. military and, most recently, according to a New York Times report, the U.S. Department of Health and Human Services has reportedly created a proposal to limit the identification of a person's gender to include only "male" or "female" that is listed at birth.

"We're on a different trajectory then we were a couple years ago," Marsden said, adding that the foundation has gone from fine-tuning the implementation of laws and policies that protect the LGBT community to rallying people against existential threats.

Shepard is one of approximately 200 people to be interred in the cathedral over the last century. The remains of the others include President Woodrow Wilson; Bishop Thomas Claggett, the first Episcopal Bishop ordained on American soil; Helen Keller and her teacher, Anne Sullivan; and U.S. Navy Admiral George Dewey.

He is one of eight candidates vying for a seat on the Vallejo City Unified School District Board of Education, which has three open seats. The three incumbents are all running for re-election, and include board President Burky Worel, Ruscal Cayangyang, and Tony Ubalde.

Messano, 39, is the owner of Vallejo-based Ryan Messano Insurance Group. On his website, Messano's main campaign platforms include banning cellphones in Vallejo schools, educating children on the "pervasive influence of media," and enforcing discipline on students of all races saying, "There should be no minimizing or emphasizing misbehavior due to a student's race."

His initial anti-gay remarks during public comment at an April City Council meeting were sparked by his disapproval of the city's new representative to the Senior Coalition of Solano County, Brenda Crawford, an African-American lesbian and former president of the East Bay LGBT Democratic Club (now the East Bay Stonewall Democratic Club). The coalition is an advisory body to the Solano County Board of Supervisors that focuses on improving the lives of seniors in the community.

He began his three-minute rant with, "Martin Luther King Jr. was a foe of homosexuality as was most of our founders of America," he said. "Now, we have a nest of homosexuals infesting our city right now who have absolutely no business getting involved in our politics. None."

He continued with a last comment about having to be "infected with a hive of homosexuals," before being interrupted by Vallejo Mayor Bob Sampayan.

"Mr. Messano, I'm going to stop you," Sampayan said. He interrupted again as Messano continued speaking, "You're going to stand down."

Vallejo police escorted him out of the meeting.

At the most recent school board meeting October 17, the last before the election, Messano spoke out about his opposition to abortion, though he did include that the "homosexual mafia" were one of many "interest groups of the Democratic Party," who have been "preying on the children of Vallejo for decades."

His comments about abortion included, "If we're gonna have people in the room who favor murdering infants and say they care about kids in this district, I will call you a hypocrite."

According to the Vallejo Times Herald, the city attorney and Vallejo Police Department have looked into a temporary restraining order against Messano. Both the VPD and the city attorney did not respond to comment for this story.

When the Bay Area Reporter spoke with Messano over the phone, he said getting kicked out of the City Council meeting was an "absolute violation of my First Amendment rights" and said it's "horrendous that the police are being weaponized against private citizens. If people are able to stand up and commend certain behavior why can't someone condemn behavior? There is no rationality to it."

He also feels the majority of his community members disapprove of homosexuality.

"Truth sounds like hate to those who hate truth," he said. In the interview he compared himself to MLK, saying King fought for the civil rights for African-Americans and Messano is fighting for "people who are moral."

In response to the city possibly considering a temporary restraining order against him, he said that he is looking into a lawsuit against the city.

"If they put a restraining order on me, I will go to jail and write a book in jail," he said.

The B.A.R. spoke to the leader of a local LGBT organization, Solano Serenity Center in Vallejo. Currently, the organization, whose mission is to promote the acceptance and well-being of the LGBTQ communities in the Solano, Napa, Sonoma, and Marin counties, does not have a brick and mortar location and is exclusively online.

Jeriann Guzman, executive director of the organization and a transgender woman, said she and others are doing all they can to stop Messano from getting a seat on the school board.

"Homophobia is alive and well in Solano County, and Ryan Messano is just the front face of it. He is expressing the opinions of a lot of people in this county who have been afraid to express those opinions, thanks to the Trump administration's way of trying to shut us up," she said.

Guzman, 57, has been knocking on doors and canvassing to alert people to Messano's hatred toward the LGBT community and that she doesn't believe Messano has a chance at winning.

Guzman explained that the county lacks resources and acceptance for the LGBT community, which she says today numbers between 22,000 and 36,000 people in Solano County.