New home for Tree of Hope 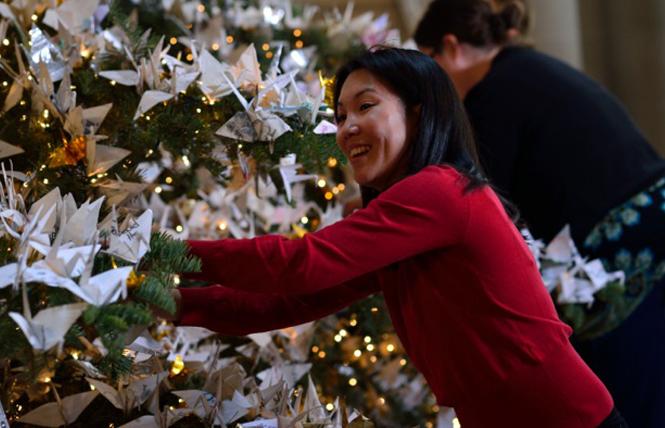 A volunteer helps decorate the World Tree of Hope in 2013. Photo: William Lee

At least, that's what the Rainbow World Fund learned when its executive director was told that its World Tree of Hope would not be in San Francisco City Hall — this year or, apparently, in future years.

Jeff Cotter, a gay man who leads the LGBT humanitarian nonprofit, told the Bay Area Reporter that RWF was informed in August that it needed to pick up its artificial tree, which has been stored at city expense since 2014.

"We have decided to approach the 2018 holiday season differently," an August 17 email from Marsha Cohen in the mayor's office to RWF stated.

Cotter told the B.A.R. that was the only communication RWF has had with the mayor's office. He has made multiple requests to meet with the mayor over the last couple of months, to no avail, he said.

"We are saddened that at a time when we need to be inspired and to reach for possibilities for ways to bring goodness into the world, City Hall has canceled the World Tree of Hope where, for more than a decade, people from all over the world would see and experience the power of hope," Cotter wrote in an email to the B.A.R. "Rainbow World Fund is passionately dedicated to serving the world, through our humanitarian work we have witnessed the power of hope in people's lives and we are not going to be stopped by any circumstance."

This is the 13th year for the World Tree of Hope's public display, Cotter said. It started in 2006 under then-mayor Gavin Newsom. The late mayor Ed Lee continued the tradition.

Bill Barnes with the City Administrator's office told the B.A.R. Tuesday that there will be a holiday tree in City Hall, but the details of who will decorate it have not been finalized. Other activities are also planned for the building and nearby Civic Center in December.

In a brief interview Monday at a reception for LGBT leaders, Breed told the B.A.R. that "other groups have asked to be part of the holiday."

Back to Grace
The World Tree of Hope will be displayed this year at Grace Cathedral, Cotter said, which was the site of its 2014 installation after a communications snafu resulted in it not being at City Hall that year.

"We are grateful that Grace Cathedral has once again opened its doors for the tree and values reflected by the tree — diversity, compassion, love for humanity and the planet," Cotter wrote.

When RWF had the tree at Grace Cathedral, it had to purchase an artificial one because the cathedral does not have sprinklers and, therefore, live trees are not permitted, Cotter said. In the August email from the city, Cotter was advised to come and collect the tree, which the city had been storing at no cost.

Officials at Grace, as they did four years ago, said they were "honored" to host the tree again.

"The tree, beautifully decorated with paper cranes, a symbol of world peace, will be in the cathedral from December 3, when a public opening event will be held, through the new year," Lynn Aylward, director of marketing and communications, wrote in an email.

The unique World Tree of Hope is decorated with thousands of origami cranes and stars that contain messages for peace and the future of the world.

The tree gets its inspiration from the story of Sadako Sasaki, who contracted leukemia 10 years after the atomic bomb was dropped on Hiroshima. While in the hospital, a friend told her about a Japanese legend that the folder of a thousand paper cranes would be granted one wish. Sasaki started folding, but died 356 cranes short of her goal. Her classmates folded the rest and all 1,000 cranes were buried with her.

Cotter said that now that the tree has a home for this year, he's asking for volunteers to help decorate it.

"Normally, I have a six-month lead time to recruit enough volunteers to decorate the tree," Cotter wrote, adding that timeframe has now been reduced. "We also have to remove the tree from city property, where it is being stored, and find new storage and deal with a number of other expenses and logistics."

According to Cotter, it takes about 50-60 hours to decorate the tree over five days with a crew of 10-15 people there the whole time.

He also invited Breed to the lighting ceremony.

"We hope Mayor Breed will join us at the tree lighting for the annual exchange of peace cranes with the Consul General of Japan," Cotter said.

To help out, visit http://www.worldtreeofhope.org/.