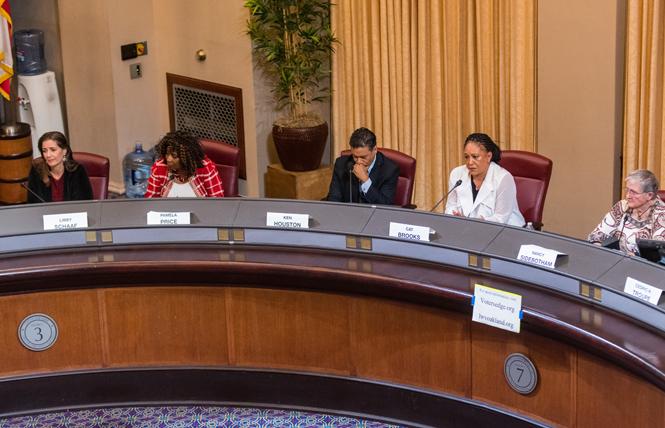 Oakland Mayor Libby Schaaf got the first word and the last during a 90-minute candidate forum last Friday at City Hall.

With 10 candidates limited to one-minute answers, and most questions directed to three at a time, there wasn't much opportunity for people to hear detailed policy positions about police accountability, homelessness, housing, or other issues. Candidates also each had three opportunities to rebut, but not all of them took advantage of that option.

There were no LGBT questions at the October 5 debate, sponsored by the League of Women Voters of Oakland.

"No one sleeps outside," she said, would be first on a statement if she's elected.

Price pointed out that the city has a large percentage of residents who live below the poverty level.

Most of the candidates said that they support Proposition 10, which would repeal the Costa-Hawkins Act that puts limits on how cities can implement rent control measures.

Price said repeal of Costa-Hawkins would give cities like Oakland "the right to manage our own situation," and added that the city needs to address needs of small landlords.

The candidates did disagree on policing. Schaaf pointed out that gun violence has been reduced 53 percent over the last seven years. She also said that when she ran four years ago, Oakland was number two on a list of crime-ridden cities but, today, is out of the top 10. She credited the Ceasefire program, which started under her predecessor.

Price said crime reduction takes "a lot more than barbershop conversations."
"We need accountability and that starts at the top," she said, adding she would reform the Oakland Police Department "from top to bottom."

Candidate Ken Houston said he served on a citizens police panel and noted "a police department is as strong as its chief." He, too, favors a new chief.

Current police Chief Anne Kirkpatrick started her job in late February 2017. In an editorial board meeting with the Bay Area Reporter, Schaaf said she is "very pleased" with the chief.

Candidate Marchon Tatmon maintained Oakland "is still in the top 10 in crime." He would push for more officers to live in the city, rather than commute from elsewhere.

Nancy Sidebotham, a longtime resident who has run for local office multiple times, said the problem is that Oakland's community policing program "went down hill." She advocated nonprofits, government, and churches work together.

She did point out that OPD has lost "all of the old guard" mostly due to retirements, resignations, and some firings in the aftermath of the police sex scandal that led to the ouster of former chief Sean Whent.

On the subject of young people, Schaaf touted the Oakland Promise program, which, among other things, is an early college scholarship seeded with $100 for all Oakland public school kindergarten students. The program, started by city and school officials, also supports families to open their own 529 college savings accounts, offering up to $100 as an incentive. It is funded by the city, school district, and philanthropic donations.

"We need to tell our kinds that even if they're scooped up in the criminal justice system we are with you," she said.

Smith said he was a former gang member and said "cops basically terrorize us."

Peter Yuan Liu, whose occupation is listed as unemployed and who wrote in his League of Women Voters candidate statement that he's a "self-made millionaire," drew chuckles from the audience when he said his main goal is to bring giant water slides to Lake Merritt to boost tourism.

On a question about emergency services, candidate Cedric Troupe said the fire department is understaffed.

Price said her supporters "have to turn out the vote." And, because the city uses ranked choice for mayor, she urged a number two vote for Brooks.

Schaaf told the audience about her deep love for her hometown and maintained that during her first term, "We have finally started building housing, including affordable housing."

As her time was running out, Schaaf reminded voters that she "never backs down for Oakland."

"I stood up to the corrupt administration of Donald Trump," she said, referring to the tweet she sent in February alerting residents to an imminent raid by federal Immigration and Customs Enforcement authorities. The advance notice angered both the president and Attorney General Jeff Sessions, who publicly called her out.

Sean Dugar, a gay man who is a nonprofit consultant, attended the forum and said he was still undecided.

"I don't know who I'm voting for or how I'm ranking candidates," he said.