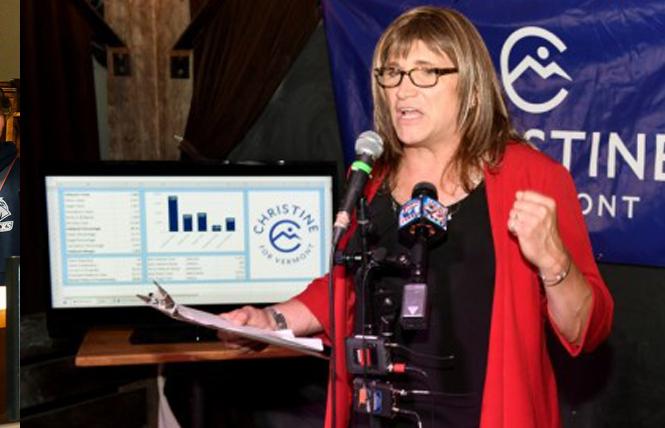 Christine Hallquist's victory in Vermont drew the most media attention. She is the first transgender person in the nation to secure a major party nomination for governor. Hallquist took 41 percent of the Democratic primary vote against three other candidates. The total turnout for Democrats - 67,000 - was twice that for the Republican primary - 36,000. In that contest, incumbent Republican Governor Phil Scott won 66 percent of the vote despite a strong challenge over his willingness to accept some gun restrictions.

Hallquist, 62, ran on a platform of growing the economy for the people with the bottom 20 percent in income, expand Medicare, and improve public education.

Hallquist thanked her spouse, Pat, and their three children for their support. She transitioned in 2015, when she was a top official at the Vermont Electric Cooperative. This is her first run for office.

In Minnesota's 2nd Congressional District, lesbian businesswoman Angie Craig secured a second chance to face off against a Donald Trump-like radio talk show host named Jason Lewis. Lewis won the seat in 2016 by 47 percent to 45 percent, but an independent candidate siphoned off a significant 8 percent of the vote.

The U.S. Senate's first, and only, openly LGBT member, Baldwin, secured the Democratic Party nomination to run for re-election in November. She'll face Republican state Senator Leah Vukmir. Vukmir has a record of voting against the interests of LGBT people, and she'll likely have the financial backing of the Koch brothers and other right-wing interests who want very much to turn Baldwin's seat into a Republican one. Vukmir won 49 percent of the vote, compared to her closest competitor, with 42 percent, and three other candidates.

Gay Michigan state House Representative Jon Hoadley won the Democratic Party nomination for re-election. And lesbian Dana Nessel won the Democratic Party's nomination for Michigan attorney general. Nessel was the attorney who represented a lesbian couple in one of the key cases that challenged state bans on same-sex marriage at the U.S. Supreme Court.

In Kansas, lesbian Sharice Davids won her Democratic primary August 7 for a congressional seat representing the 3rd District. Davids, an attorney and Native American, won 37 percent of the vote but beat out two other candidates for the nomination.