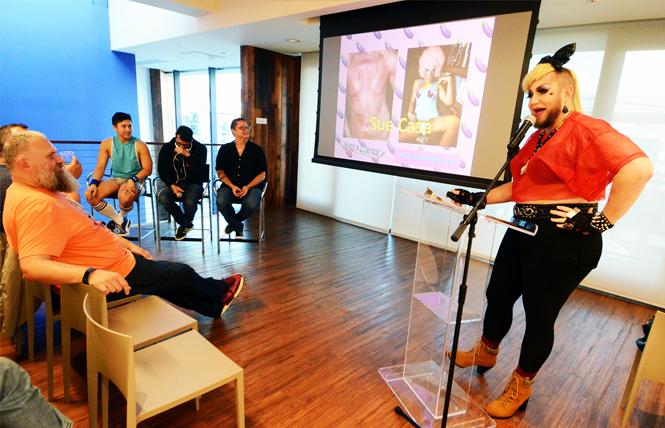 LOL McFiercen, right, gets the audience primed for her questions to the panel of local drag queens at the Strut event "All the T about the D: Drag Queens Talk Trade." Panelists, at left, were Rock M. Sakura, U-Phoria, and Tamale Ringwald. Photo: Rick Gerharter

Drag queens and their fans attended an intimate conversational-style panel to share their experiences in hookups and sex. The panel discussed social issues and how they relate to drag queens, particularly within the queer community, and provided space for unfiltered conversation.

The event, "All the T About That D: Drag Queens Talk Trade" was hosted by drag queen LOL McFiercen (Kevin Seaman) August 10 at Strut, the San Francisco AIDS Foundation's health center in the Castro.

Inspired by McFiercen's personal relationships with social justice and drag, "All the T About That D" challenged social norms through provocative questions. Popular belief in a gender and sexual binary suggests that the space for drag stars to experience sexual freedom could be limited, and McFiercen confronted the limitation.

"This event came out of some deeper work that I'm doing called, #femmasculine," McFiercen said in an interview prior to the panel. "It's exploring the impact of toxic masculinity on the queer community and helping to create community in different spaces, demoting racism, transphobia, and systems of oppression," they said.

McFiercen's effort to construct the conversation around drag and sexuality stems from their career in creative jobs, which includes wearing multiple hats.

McFiercen generated intellectual conversation with forward questions about conversations on dating apps, experiences with spontaneous hook-ups, and social issues. Through this questioning, the space explored sexuality, drag, and institutions of oppression within different day-to-day activities of the drag stars. Audience members, and anyone who's been on a date or hookup, could relate as the answers from each drag star were extremely diverse.

Each drag star expressed varying levels of interest in sex, ranging from asexual preferences to sexual fluidity. Their diverse opinions and stories exhibited how any person with a kink, vanilla preference, or asexual preference could experience dating, sexuality, and social interactions in similar ways to the drag stars on stage.

One story involved a sexual encounter in which the drag star's partner said, "You're the only drag queen I'd allow to fuck me." In this context, the drag queen's partner was a gay male who considered himself masculine. The partner, who sleeps with men, believes his masculinity is justified by society through his behavior as "straight-acting" and personalizes the sexual encounter with the drag star as acceptable but not with another drag queen. The intellectual stimulation did not stop there.

On each social issue, the drag stars demonstrated a passion for understanding what the history of the issues were and an interest in helping others explore their underlying biases and prejudices to question their beliefs about different groups of people.

"It's very inspirational to witness these ladies be incredibly honest and vulnerable on stage about their experiences in dating and dealing with femphobia in particular," said attendee Samuel Russell. "I was surprised learning about the different ways these ladies face systems of oppression from other members of the queer community, especially since one could mistakenly think all members of the queer community are woke, but I'm happy to see that these ladies are getting heard and that there is action happening now to promote more positive spaces for more people within the queer and non-queer communities."

The panel initiated a discussion about sexual freedom and acceptance for anyone queer, or non-queer, to explore sexuality and drag. As the evening for the drag stars' discussion came to an end, audience members were left with diverse answers to dealing with opposition and an awakening to a movement toward sexual freedom of drag stars within their own communities.

"These conversations are important to reconcile the masculine and feminine binary on one body," said McFiercen. "I'm really hoping to pinpoint the impact of toxic masculinity on gay communities and other queer communities."