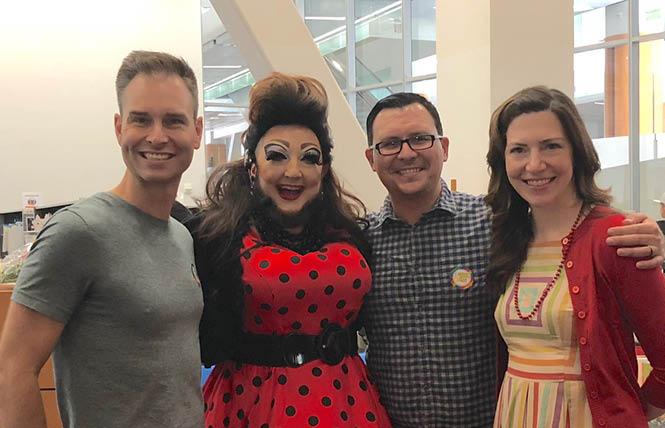 The South Bay's main LGBT political group has elected a new leader ahead of the fall election.

The change had been expected as Gonzales, who had led BAYMEC since 2012, signaled to the Bay Area Reporter last year that he planned to transition out of the president's role in 2018.

"BAYMEC is charging forward with new energy, new partnerships, and record numbers of LGBTQ people running for office," noted Gonzales in an email announcing the vote. "Paul has worked to strengthen ties between LGBTQ organizations in our area and their leaders, and we are using those networks to ensure we are serving our community in a coordinated and thoughtful way."

Escobar, the interim president of the San Jose Downtown Residents Association, will serve a two-year term as president. In an emailed statement to the B.A.R., he thanked his board colleagues and pledged to expand on BAYMEC's legacy.

"For over three decades, BAYMEC has been the constant political voice and defender of the LGBTQ community in this region. Today's uncertain and concerning times demand that our community come together and work more closely with others who still struggle to achieve equality," wrote Escobar. "Every day, I see more people pitching in and doing their part to lessen divisions, ease suffering and end discrimination. BAYMEC has always done this, and I have accepted the presidency to do my part and continue that work."

Maureen Heath and Dawn Cieslik were re-elected as secretary and treasurer, respectively, of the board.

Founded in 1984, BAYMEC has been the political voice for the LGBT community in Santa Clara, San Mateo, Santa Cruz, and Monterey counties. Since last year it has worked to revamp itself after having a muted presence during the 2016 elections due to a loss of board members and momentum.

It revived and reworked its annual gala into a brunch event last year; the 2018 event is set to take place Sunday, September 30. Lesbian state Senate President Pro Tem Toni Atkins (D-San Diego) will be the keynote speaker; tickets are already on sale online at http://www.baymec.org/event/baymec-brunch-gala-2018/.

And BAYMEC is once again endorsing candidates in local races. Last month it decided to early endorse a sextet of out candidates running in fall races in the South Bay and Monterey and Santa Cruz counties.

It is backing Jason Galisatus, a gay man seeking a city council seat in Redwood City; Adam Spickler, a gay transgender man running for a Cabrillo community college board seat in Santa Cruz; and Kayla Jones, a queer woman on the Seaside City Council now running to be mayor of the Monterey County town.

The California Fair Political Practices Commission has proposed the penalty for Privacy for All Students, the committee that had attempted to overturn Assembly Bill 1266. The legislation, authored by gay former Assemblyman Tom Ammiano (D-San Francisco), requires the state's public schools to allow transgender students to join athletic teams and access facilities such as bathrooms and locker rooms that correspond with their preferred gender identities.

In 2013 the ballot measure committee, overseen by Karen England and treasurer John Fugatt, failed to collect enough signatures to place it on the ballot. After a prolonged fight with state election officials and a court challenge, the repeal effort sputtered out in 2014.

A second attempt by the committee to place another measure on the 2016 ballot, known as the "Personal Privacy Protection Act," also failed to qualify. According to the secretary of state's office, the committee is still active and raised $11,199 during the first half of 2018 and spent $11,410 during the reporting period, leaving it with just $58.54 in its account as of July 1.

While the violations could have amounted to a $10,000 fine, the FPPC staff recommended the lower amount since there was no evidence that the committee had purposefully tried "to conceal, deceive, or mislead the public." But the staff report did point out that Fugatt has a history of campaign reporting violations and fines.

In fact, he is facing another fine of $7,500 for similar reporting mistakes involving the California Conservative PAC. Fugatt is that committee's treasurer and principal officer.

The FPPC is expected to approve both fines at its meeting Thursday, August 16.