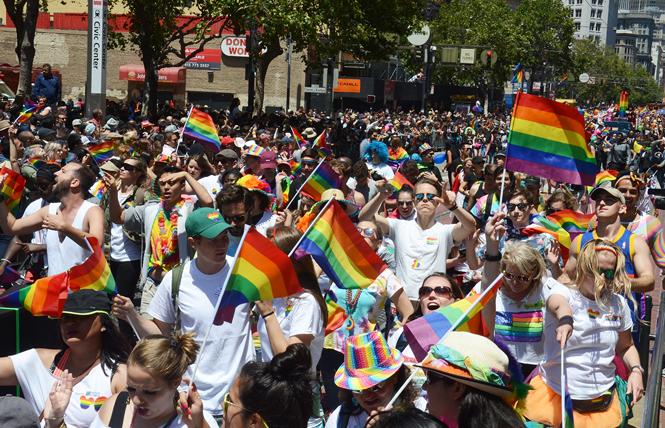 Every year, the San Francisco Pride celebration brings new faces and new entertainment to the multitude of attendees, and most of the action takes place on Sunday with the parade and celebration.

This year, for its 48th anniversary, SF Pride officials are putting a local focus on its Saturday festivities, in the hope of drawing more people to what is typically a more low-key day.

This year's theme, "Generations of Strength," will also deliver new events to the bash that is expected to welcome more than a million people for the festivals on Saturday and Sunday, June 23-24, and the colossal Sunday parade.

George Ridgely Jr., executive director of the San Francisco LGBT Pride Celebration Committee, the nonprofit organization that oversees the event, said that although he hasn't marketed Saturday as being more local, he knows, as attendance grows year after year, including a rise in out-of-towners and straight allies, that preserving the local feel has become ever more pressing.

"Keeping it local is something we think about all the time when looking at our programming, entertainment, and the composition of the parade," said Ridgely, a gay man. "Although there is no avoiding the fact that San Francisco Pride is a world-class destination for people, I know that it's important we don't lose our core sense of self and values."

Almost 80 percent of the people who come to enjoy the weekend events do not live in the city, though 42 percent are from the Bay Area, according to a San Francisco economic impact study of the city's outdoor events from 2014.

Over the years, Saturday has become the quainter, family-oriented, and less crowded day as the parade on Sunday draws throngs to city streets. Ridgely did say that, with the end of Pink Saturday in the Castro a few years ago due to incidents of violence, Saturday attendance is picking up. Entertainment that day is also locally focused.

Some highlights from both festival days include the main headliner, female hip-hop artist Kehlani ("The Way") who performs Sunday, at 5:30 p.m. at the main stage at Civic Center Plaza.

Bringing the "Generations" theme to a more tangible level for festivalgoers is the "Seniors Tell All" activity. Located near the southwest side of the Civic Center Plaza, LGBT seniors will be available for open conversation to share their stories of activism and resistance. Larry Nelson, a gay man, came up with SF Pride's theme this year and was a strong voice in the creation of Seniors Tell All.

"I am 65 and when I go away my story shouldn't," Nelson said. "I want younger people to be able to ask us 'What was it like then? What did you do to survive?'"

The timing of the theme this year is opportune, Ridgely said.

"We want to recognize the older generation's contributions, record their stories, and pass them on to the younger generation who will now carry the torch," he said.

Local flavor
Saturday's festival includes almost all local performers. The Stud, a queer bar in the city's South of Market neighborhood, will bring drag queens and a DJ set by Siobhan Aluvalot. Femme Deadly Venoms, an all-female, Bay Area-based group will bring its hip-hop sound to the stage. Ms. Nzuri Soul, also from the Bay Area, will perform jazz and R&B tunes, and drag artist Trangela Lansbury will also perform. 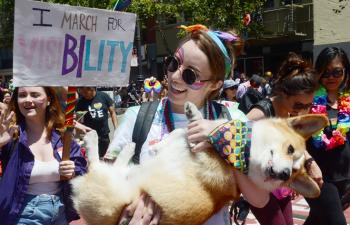 Everybody Loves A Corgi was part of the San Francisco 2017 LGBT Pride parade, and the contingent is expected back this year. Photo: Rick Gerharter

Sunday parade
The parade will have even more contingents than it did last year with over 280. As per tradition, the five-hour parade will kick off with the rumblings from the Dykes on Bikes Women's Motorcycle Contingent. This will be the first time that Dykes on Bikes founding member Soni Wolf will not lead the group. Wolf died at the age of 69 on April 25 from natural causes. She will be posthumously honored as a community grand marshal this year and her contributions will be celebrated on the main stage Sunday.

Resistance to the Trump administration will again be a strong aspect of the parade as it was last year, Ridgely said. SF Pride organizers have long faced criticism that the parade and celebration have become too commercial, which led to a more politically-focused Pride in 2017. The resistance contingent will follow Dykes on Bikes to protest the Trump administration and its policies that negatively affect the LGBT community and other minorities.

"In just a few short years following the greatest progress in modern American LGBTQ history, we've experienced drastic setbacks on many aspects of our lives," Michelle Meow, who is serving her last year as SF Pride board president, said in "Inside Pride," SF Pride's official guide to the festival. "Pride is about evolution as much as it is about reflection. We will always fight for our rights and fight to keep them."

The San Francisco Human Rights Commission; Lieutenant Governor Gavin Newsom, who is also the Democratic nominee for the gubernatorial election; San Francisco Mayor-elect London Breed; Planned Parenthood of Northern California; and many corporate and nonprofit participants are among the contingents.

Security
Security for the weekend festival will be similar to last year. Formal safety screenings were instituted at the SF Pride celebration two years ago following the June 12, 2016 massacre at Pulse nightclub in Orlando, Florida, where 49 mostly LGBT people of color died in one of the nation's deadliest mass shootings.

The San Francisco Police Department will have a strong presence throughout the weekend, officials said.

"There will be a significant police presence during Pride activities, with both uniformed and plainclothes officers on duty to monitor public events," according to an SFPD Facebook post.

All attendees will be screened at the entry gates this year and will have to walk through metal detectors or be screened with handheld wands. People's bags will be checked, and bags larger than 18 inches by 18 inches won't be permitted. Ridgely said people should expect to wait in line for about 20 minutes.

BART will operate on a regular Sunday schedule, with trains starting at 8 a.m., but will provide longer and additional trains before and after the celebration to accommodate the crowds, according to its website.

The parade and festival are free, but there is a suggested donation of $1-$5 for the festival. Donations from the celebration have helped SF Pride contribute nearly $3 million to community nonprofits since 1997. Every year, Bay Area nonprofits work as community partners to provide volunteers for SF Pride. In exchange, the groups receive a portion of the proceeds.