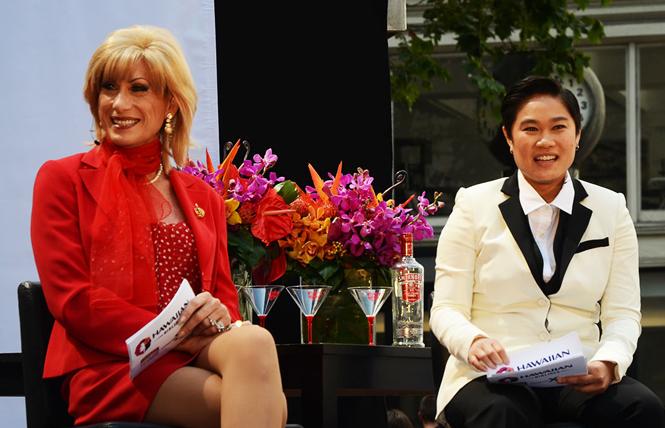 Donna Sachet, left, and Michelle Meow, shown in 2013, will be back this year hosting the SF Pride parade TV broadcast. Photo: Rick Gerharter

The nonprofit behind the Pride celebration, happening June 23-24, announced in March a three-year partnership with CBS Bay Area for the production and distribution of the Pride parade on all of its digital platforms.

"We are bringing back the livestream and we are elated," Ridgely told the Bay Area Reporter in a recent interview. "This is one of the most exciting things this year. To be the first Pride parade to be syndicated in the world means so much."

"We're honored to showcase Pride's vibrant parade for the next three years on all of our broadcast and digital platforms," said Kevin Walsh, president and general manager of KPIX/KBCW, in a news release. "KPIX 5 has a proud legacy of covering the LGBTQ community. Now we look forward to bringing this 21st century celebration to multiple screens, and building on their very successful tradition."

The broadcast will be hosted by SF Pride board President Michelle Meow and drag queen Donna Sachet. Meow is the host of the "Michelle Meow Show," that airs on KBCW-TV, a CBS affiliate. Sachet co-hosted a Comcast weekly LGBT television series called "OUT Spoken" for five years and currently serves on the advisory board at PRC, formerly known as the Positive Resource Center.

The pair has hosted the parade for nearly a decade. Their on-air camaraderie is so popular that when Sachet was not invited back to host in 2009, her replacement, Jai Rodriguez, of the old "Queer Eye for the Straight Guy" TV show, ended up offending viewers with his commentary and it caused a public backlash. The pair have hosted the broadcasts together ever since.

KPIX reporter Christin Ayers and retired KPIX political reporter Hank Plante, a gay man, will also help with coverage for the parade. Plante, 71, will travel from his home in Palm Springs to San Francisco, where he spent two decades reporting on LGBT issues, including the HIV/AIDS epidemic of the 1980s, for KPIX.

"It's so personal to me as one of the first openly gay TV reporters in the country," he said. "It's a thrill for me to be back covering the parade in the beautiful city of San Francisco."

WB20, which is now Granite-owned independent KOFY, was the first station to air the parade live in 1995. Since then, SF Pride has worked with many Bay Area broadcasters for the live web stream and televised broadcasts of the parade, including KRON and KOFY TV20-Cable 713, which has most recently aired the parade online in the last few years. The KOFY web broadcast in 2013 earned its first Northern California Emmy Award nomination.