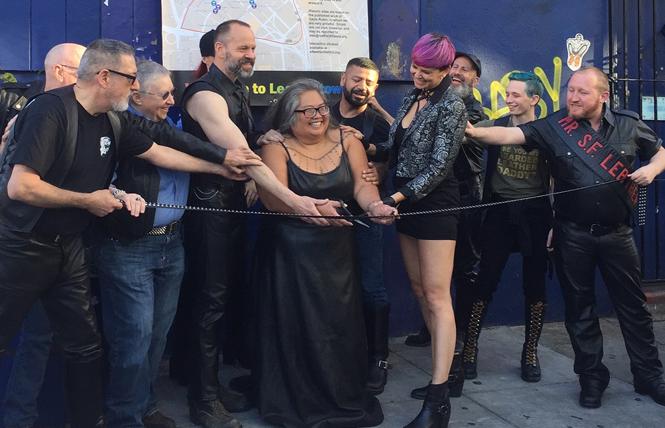 Members of the Bay Area leather community gathered June 12 for a victory party celebrating the designation of San Francisco's new Leather and LGBTQ Cultural District in the South of Market neighborhood. With strong support from District 6 Supervisor Jane Kim, the Board of Supervisors unanimously approved a resolution authorizing the district in early May.

"The queer and kink communities of SOMA have faced so many challenges over the last 70 years, and yet we have refused to let go of this little corner of the world," said Rachel Ryan, a member of the Stud collective who was part of the yearslong effort to obtain the designation.

"We have witnessed the heartbreak of a plague, but we have also seen fierce activism," she added, referring to the AIDS epidemic. "We have been threatened by attempts to 'clean up urban blight' and by rising rents and evictions, but we have fought to keep our bars and businesses open."

The district, which encompasses about 10 blocks in an area South of Market that was once home to dozens of watering holes catering to the community, aims to preserve and support leather- and queer-oriented businesses in one of the most rapidly gentrifying parts of the city.

Tuesday's celebration featured a social hour at Mr. S Leather on Eighth Street, a ribbon-cutting outside the Stud at Harrison and Ninth streets, and a champagne toast at the Eagle on 12th Street, all of which fall within the boundaries of the new district.

"To the best of my knowledge, this is the first time a city has officially acknowledged that leather culture is inherently important," said Bay Area Reporter leather columnist Race Bannon. "It serves as a beacon of hope for people throughout the country, and indeed the world."

The cultural district is one of several efforts to recognize and preserve the area's leather and queer history in the face of rampant development, including the establishment of the Eagle Plaza outside the bar of the same name and a leather history installation on Ringold Alley.

"The leather and LGBTQ culture which has thrived here for decades is an outgrowth of the tolerance and acceptance that make San Francisco an outstanding place to live, work, and play," Bob Goldfarb, another leader of the group that spearheaded the cultural district, told the B.A.R. "Preserving and nurturing that culture helps keep this city a unique and diverse place."