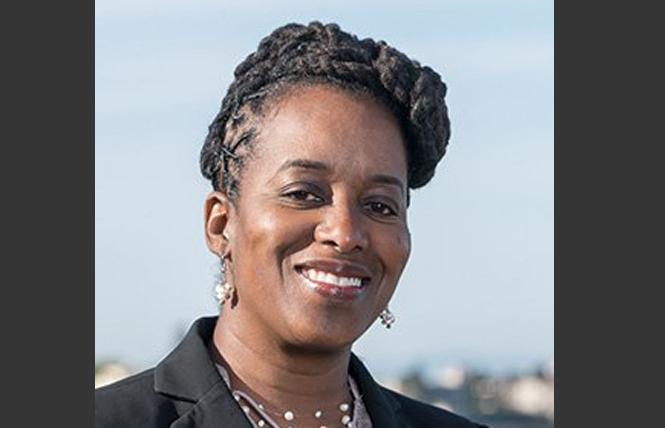 In the only competitive state legislative race in the Bay Area with out candidates, all three of the challengers appear to have fallen short in Tuesday's contest for the open 15th Assembly District seat, which stretches from Richmond south into parts of Oakland.

As of Wednesday morning, it appeared that two straight candidates will compete in November to succeed Assemblyman Tony Thurmond (D-Richmond), who is running to be the state superintendent of public instruction.

Jovanka Beckles, a lesbian who sits on the Richmond City Council, was narrowly behind Kalb, with 14.6 percent of the vote. Their margin of difference was 182 votes, meaning there is a chance that once the remaining ballots are counted in the coming days that Beckles could secure the second-place spot. 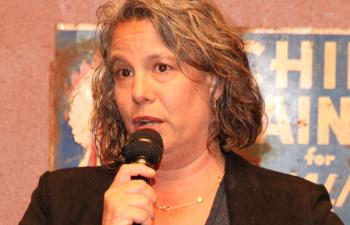 Earlier Tuesday night, at her campaign party at Doc's Refresher in Berkeley, Appel said she was feeling optimistic, though early returns had her behind.

"It was such an amazing campaign," Appel told the Bay Area Reporter. "We had a team of incredible, creative, hard-working people behind me."

Other races
There were 16 LGBT candidates known to be running for state Assembly or Senate seats in Tuesday's primary races, two fewer than the high seen in 2012. Yet the eight lesbian legislative candidates on the June primary ballot was a record number.

In Riverside County, Palm Springs resident Joy Silver, an expert on aging issues, came in second place with nearly 35 percent of the vote in the state's 28th Senate District seat. She is aiming to unseat Senator Jeff Stone (R-La Quinta), one of the most anti-LGBT members of the Statehouse, who placed first in the primary with nearly 56 percent of the vote.

In San Diego, lesbian real estate agent Sunday Gover, who lives with her partner and their four children in Scripps Ranch, is running against Assemblyman Brian Maienschein (R-San Diego). The former San Diego city councilman was first elected to his 77th Assembly District seat in 2012 and has been very supportive of LGBT legislation over the last six years.

He came in first in the primary race with 58.5 percent of the vote. Gover was in second place with 41.5 percent.

Two of this year's out candidates ran for seats that were vacated by the incumbents. Montebello City Councilwoman Vivian Romero, who identifies as gay, was in the odd position of running in two elections for the same Senate seat on the June 5 primary ballot.

The special election to serve out the remainder of Mendoza's term through December of this year was held June 5. Since none of the candidates captured 50 percent plus one of the vote, the top two vote-getters will face off in a runoff election August 7.

Both Romero and Mendoza, who ran to be re-elected to his seat, came in behind the top two finishers. Nor did they survive the primary to compete in November for a full four-year term in the Senate seat.

In the other primary race where the incumbent resigned, Steve Dunwoody failed to make the November ballot for the 54th Assembly District seat in Los Angeles. It became vacant when Sebastian Ridley-Thomas resigned in December due to health issues.

After failing to make the ballot for the special election earlier this year, Dunwoody ran as a write-in candidate but lost to Sydney Kamlager, who had been serving as a Los Angeles community college trustee. The assemblywoman finished first with 54.5 percent of the vote Tuesday.

Dunwoody, who had hoped to become the first gay African-American man elected to the Legislature, was far behind with just 8.5 percent of the vote.

Out incumbents all advance
Facing relatively easy bids for re-election come the fall are gay Assemblymen Evan Low (D-Campbell) and Todd Gloria (D-San Diego), as they are facing token opposition from Republicans in safe Democratic districts.

She will face a Republican opponent, Antonio M. Garcia, in the fall as the GOPer landed in second place with 31 percent of the vote Tuesday. Democrat Carlos Villapudua fell short in his bid to take on Eggman, receiving roughly 17 percent of the vote.

Lesbian Assemblywoman Sabrina Cervantes (D-Corona) is facing a tough road to re-election in November, as she came in second place Tuesday behind her Republican opponent, federal prosecutor Bill Essayli. He took first place with 53 percent of the vote, while Cervantes netted nearly 47 percent.

The GOP has targeted the freshman lawmaker for defeat, using her vote for the state's controversial gas tax increase against her. It is sure to haunt her into the fall election, when voters will decide on a ballot measure seeking to repeal the gas tax.

Out Republicans also advance
Henry Gomez Nickel, a gay man who serves on the San Bernardino City Council, presents the best chance in years for LGBT Republicans seeing one of their own win a state legislative seat.

Nickel, who husband is an immigrant from El Salvador, is seeking the 40th Assembly District seat. The current officeholder, Assemblyman Marc Steinorth (R-Rancho Cucamonga), is running for a San Bernardino County supervisor seat rather than seek re-election.

He took first place Tuesday with nearly 47 percent of the vote. Democratic San Bernardino County Supervisor James Ramos was in second with 40 percent, while Democrat Libbern Gwen Cook, a teacher, came in third with 13 percent.

This is the second time Nickel has sought a legislative seat. In 2010 he lost a bid for the state's then 63rd Assembly District seat. Four years later he won election to a partial term on the San Bernardino City Council representing the city's Ward 5. The next year he won election to a full four-year term.

On the board of the California League of Cities LGBT Caucus, Nickel is facing an uphill climb to win in November, as Democratic voters are likely to coalesce behind Ramos. Should Nickel win the Assembly seat, he would be the first out Republican elected to the state Legislature.

(In 2010 former Republican assemblyman and senator Roy Ashburn came out as gay after being pulled over on suspicion of drunk driving with a younger male passenger he reportedly had met at a Sacramento gay club. He was termed out of his Senate seat that fall.)

Gay GOP Ontario resident Matthew Munson will run against state Senator Connie M. Leyva (D-Chino) in the 20th Senate District, which encompasses parts of the Inland Empire. He came in second place with close to 36 percent of the vote Tuesday, though he has no chance in November of defeating Leyva, who took first place in the primary with 46 percent.

Two other gay GOP candidates are expected to be on the November ballot having run as write-in candidates Tuesday against Democratic incumbents who did not draw official opponents in the primary. It will be several days until elections officials announce how many votes either received.

Currently, there are eight out members of the state Legislature, four each in the Assembly and Senate. The membership of the California Legislative LGBT Caucus is also split evenly between men and women at the moment. Gay Senator Ricardo Lara (D-Bell Gardens) could depart at the end of the year if he wins his race for state insurance commissioner in November.