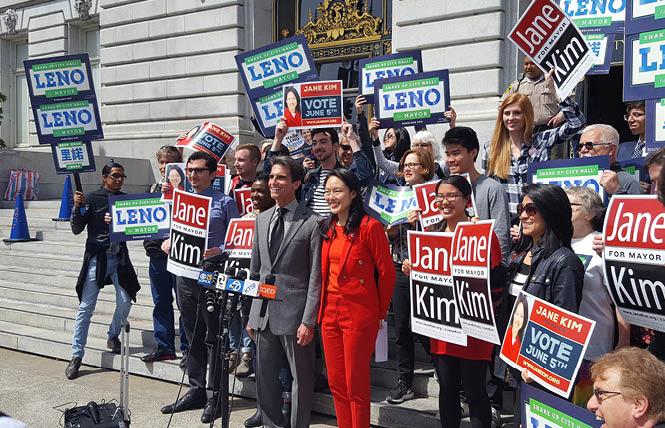 Mayoral candidates Mark Leno and Jane Kim held a news conference Thursday and asked their supporters to rank the candidates as their first and second choices under ranked choice voting in the June 5 election. Photo: Cynthia Laird

San Francisco mayoral candidates Mark Leno and Jane Kim announced Thursday (May 10) that they have joined forces and are asking their supporters rank the candidates as their first and second choices in the June 5 election.

City voters can select up to three candidates in the mayor's race. Under ranked choice voting, if no candidate has a majority, the last-place candidate is eliminated, and voters who supported that candidate have their ballot instantly go to their next choice. This cycle repeats until someone receives a majority of the votes.

Leno, a former supervisor and state lawmaker, is seeking to become the first LGBT person to be mayor of San Francisco. Kim, who is termed out of her District 6 board seat this year, is running to become the city's first Asian-American female mayor.

The two candidates, joined by their supporters, held a news conference outside City Hall Thursday morning to announce their new alliance and release an online ad in which they urge voters to pick both of them over "wealthy special interests."

"When I filed my papers to run for mayor I put forward a fair campaign pledge to reject super PACS," Leno said at the news conference. "Jane Kim was the first to sign the pledge with me."

He added Breed had her own pledge where she says she'll denounce political action committees, but that independent expenditure committees have spent on her behalf in the race.

"The spending cap has been broken three times," Leno said. "This is not what voters of San Francisco want."

Kim said that if she doesn't win the election, she'd like to see Leno move forward.

"We are united in change for San Francisco," Kim said. "Mark and I are opponents, as everyone knows, but negative attacks don't serve" voters. "We have an opportunity to be an example," she added, of taking advantage of ranked choice voting.

"Regardless of which one, we're calling on all supporters to vote for each of us," Kim said. "We can do better. I'm proud to stand with Mark and stand against" the attacks.

"What's the news here? Leno and Kim's one-two strategy was announced to the world the day they orchestrated London Breed's removal as acting mayor," Moriarty told the Bay Area Reporter.

She was referring to the January Board of Supervisors vote that removed Breed as acting mayor, a duty she assumed after the December 12 death of mayor Ed Lee. Kim and other progressive supervisors who are backing her, Leno, or both of them voted to install then-District 2 Supervisor Mark Farrell as mayor until the election. Gay District 8 Supervisor Jeff Sheehy, who has so far not endorsed in the mayor's race, provided the critical sixth vote for Farrell.

Breed held her own news conference earlier Thursday when she went to City Hall to vote. Joined by supporters, Breed said that she's focusing on the issues and her own campaign.

"I want to encourage all San Franciscans to cast their ballot to ensure that their voices are heard," Breed said in a statement. "Now more than ever, we need bold and fearless leadership to confront the challenges that our city faces, including ending homelessness, creating more affordable housing and putting a stop to the car break-ins. Today, and in the days leading up to June 5, I humbly ask for your vote."

Breed will get some star power for her race Friday when Chelsea Handler, a comedian who has a contract to create shows for Netflix, is set to appear in San Francisco for a conversation with Breed Friday, May 11, from 4:30 to 6 p.m. Tickets range between $50 and $500. To register, visit https://londonformayor.nationbuilder.com/handler_event_susie_tompkins_buell.