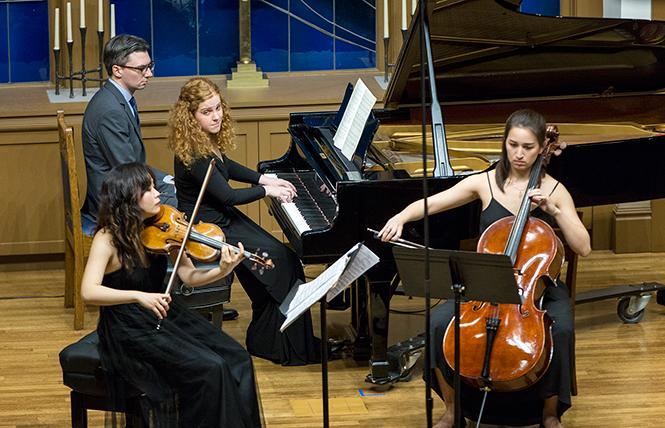 After two days of ambitious and well-achieved performances, talks and discussions, the second festival of Bard Music West ended last weekend at Noe Valley Ministry in San Francisco. Dedicated to the fascinating life and work of "one of the Bay Area's greatest innovators," visionary composer Henry Cowell, the mission of the festival (last year dedicated to Gyorgy Ligeti) was an exploration of the mind and world of a wonderfully accomplished but largely unrecognized genius.

From his beginnings in Menlo Park, CA, through his struggles and triumphs in New York, Europe and even the Soviet Union, the gifted composer, performer, producer, publisher and teacher was cruelly brought low at age 39 by an allegation of a single act of oral sex. Whether naïve or simply distrustful of the legal system (his parents were philosophical anarchists), Cowell pled guilty without counsel. Reminiscent of the trial of Oscar Wilde, he was horrifically sentenced to 15 years in San Quentin. Though the act was between two men, homosexuality was only an unstated subtext of the charge. A smear campaign in the local press, most damaging in the San Francisco Examiner, fueled a homophobic bonfire and added unfounded accusations of pedophilia to the mix.

It might have destroyed him, and it left some old supporters behind, most notably composer Charles Ives, but Cowell made a brave attempt to survive. He taught music to thousands of inmates, and maintained correspondence with many loyal colleagues. It took four years of heavy struggle for early parole. Even without much hope of freedom to enter contracts or travel far, the determined champion of new American writers prevailed. 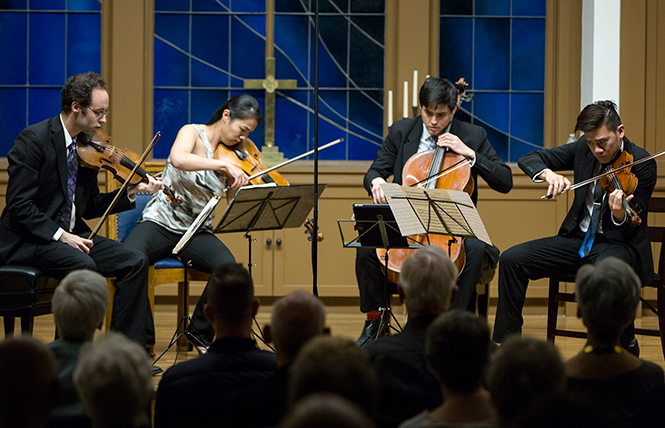 The stigma of that tortuous episode has followed Cowell since his death in 1965, and perhaps explains his relative obscurity today. The legacy remains, however, and praise and thanks are due to Bard West Artistic Directors Allegra Chapman and Laura Gaynon for their amazingly comprehensive and intelligently programmed celebration of a great American's life.

There was so much on offer in the Festival, including the world premiere of a new dance work (Cowell had a productive connection to Martha Graham), music by other adventurous composers from John Cage to George Crumb, and a fascinating and all-too-brief talk by Cowell biographer and pianist Joel Sachs. Many highly talented and fresh young artists created a nonstop array of attractive performances in three jam-packed programs. I was forced to cherry-pick.

On Program 1, "In Search of American Music," selections by Cowell were sprinkled throughout a concert that featured other earlier American composers and his contemporaries. Pianist Sarah Cahill was a fine interpreter of pieces by Cowell, as well as by Leo Ornstein (a startling "Suicide in an Airplane"), Dane Rudhyar, John Cage and Johanna Beyer. The soloist covered the range from fierceness to seductive dreaminess with expert confidence.

The real centerpiece of the program was a terrific rendition of Charles Ives' astonishing Piano Trio (c. 1904, revised 1911) by Bard West Artistic Directors Allegra Chapman (piano) and Laura Gaynon (cello), joined by violinist Luosha Fang. The Trio encapsulates everything we love and fear about Ives, from the jarring dissonances to the alternating robust and misty evocations of old hymn tunes. Deep emotional response is evoked with bright-eyed passion and dry Yankee wit. The performers cut to the heart of the score with energy and understanding.

I caught Joel Sachs' lecture with musical examples (well, really more a relaxed talk) the following afternoon, and was absorbed by his obviously vast store of anecdotes and historical knowledge of Henry Cowell. I could have listened to him for hours, and he certainly appeared game, but time constraints kept it short. I will be looking for his biography "Henry Cowell: A Man Made of Music" (2012, Oxford University Press).

Next attendance was Program 3, "Henry Cowell: Inventor," which opened with a world premiere dance work, "The Sound of Your Solitude and Mine" by composer Eugene Birman and choreographer James Sofranko. Musical group Third Sound supported dancers from SFDanceworks Brett Conway and Danielle Rowe in a deep look at human connectivity. The music is intriguing (with auditory breathing an integral part), and the dancing was poignantly effective.

Returning from her exceptional performance on Program 1 in songs by Ruggles, Luening, William Grant Still and a radiant Aaron Copland, soprano Sara LeMesh gave another display of her ease with difficult modern works in some dazzling songs by George Crumb, with words from Walt Whitman. The singer's clear enunciation and perfectly controlled vibrato were assets in showcasing some very challenging music.

Pianist Orion Weiss appeared successfully as soloist and with violinist Karen Kim in works by Cowell and Carl Ruggles. They both showed the encouraging wealth of young talent Bard Music West has on tap.

The piece that closed the Festival couldn't have been more appropriate or satisfying. Henry Cowell's delightful "United Quartet," performed by the Telegraph Quartet - Eric Chin and Joseph Maile, violins; Pei-Ling Lin, viola; and Jeremiah Shaw, cello - was written in 1936, the year of Cowell's imprisonment. The score is, nonetheless, a surprisingly cheerful work that had me smiling from start to finish. Full of melody and wit, the Quartet is also a fine example of the composer's stylistic versatility. It's hard to keep a good man down, and "Bard Music West: The World of Henry Cowell" proved it beautifully.