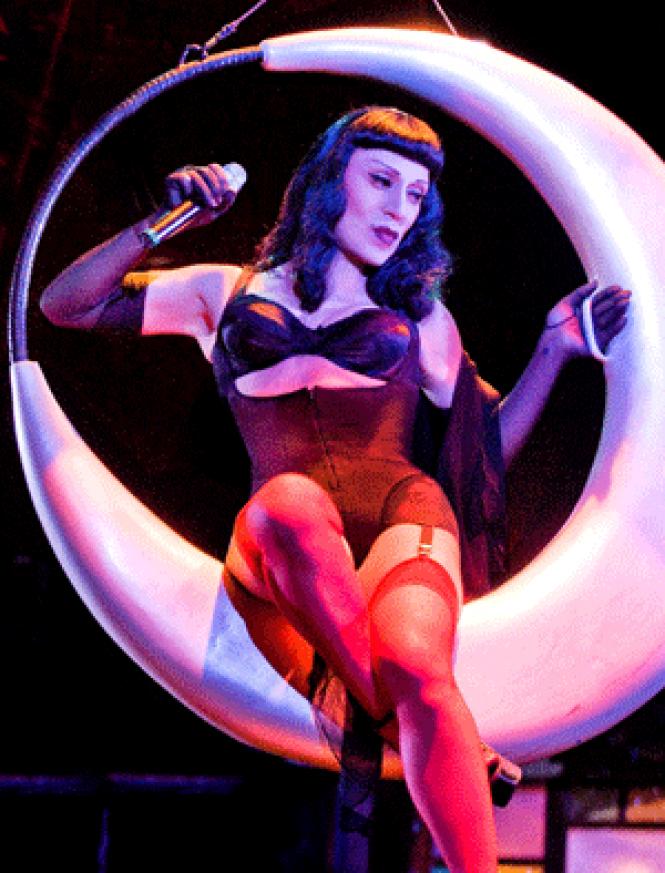 In 1920s Hollywood, the great screenwriter Anita Loos described a star as someone who had that indescribable "it." "I know it when I see it," said Loos. When a star has "it," their mere presence is mesmerizing. It's impossible to turn away from them. In the new promo video for Joey Arias: Love Swings, which master showman Marc Huestis presents at the Castro Theater on Valentine's Day (Thurs., Feb. 14), Joey Arias clearly has "it." In the video, the New York-based performer stares hypnotically into the camera. His dark eyebrows and full lips invite you to join his otherworldly persona.

"When I sing, I go into a trance," Arias said in a phone interview with the B.A.R. "My voice comes from somewhere in heaven." He's become well-known for his almost-ghostly interpretations of the Billie Holiday songbook. "I just do what I'm doing. I'm not pretending to be her. Singing is very spiritual for me."

Though he adopts a quasi-female persona onstage, Arias doesn't identify as a drag queen. He has, he says, a great deal of respect for drag performers. "I'm in-between," he says. "I'm not male, not female. I've always pushed the boundaries."

His musical tastes are quite eclectic. Besides Holiday, Sinatra, and other crooners of that period, he includes Led Zeppelin, the Beatles, Dylan and Bette Midler as being among his musical idols. He draws upon all of them for inspiration in his performances. "I enjoy a lot of music. I like to take a song and put life into it." He's not exaggerating. His repertoire includes the 60s psychedelic anthem "White Room" by Cream, performed with an African beat.

When Arias appears at the Castro to perform Love Swings, romance will be in the air, albeit with the star's unique edge. He will be accompanied on the baby grand by Eliot Douglass, who joins Arias directly from Cirque De Soleil's Zumanity.

"This evening of song and spectacle will feature Arias singing songs of love with a sly touch of seduction," said Marc Huestis. "All in Arias' own inimitable style. It's an evening of fine romance and dirty fun."

Arias feels that his performances of these older tunes help to introduce them to the younger generation. "These songs were written at a time when people were at war," he said. "It's a lost art-form. If I keep singing them to the younger crowd, they'll get into it. I now have 18-year-olds asking me for Billie Holiday's 'Them There Eyes.'"

The exciting night will include performances by chanteuses Veronica Klaus and Connie Champagne. There will also be a fabulous fashion show presented by Mr. David.

VIP ticket-holders may also join Arias for a bubbly after-show reception in the Castro Theater Mezzanine. VIP tickets cost $58. General seating is $32, while balcony seats go for $22. Tickets may be purchased through Ticketfly, or by calling (415) 863-0611.