Chris Kelly: 'The Other Two' co-creator on finding truth through gay comedy 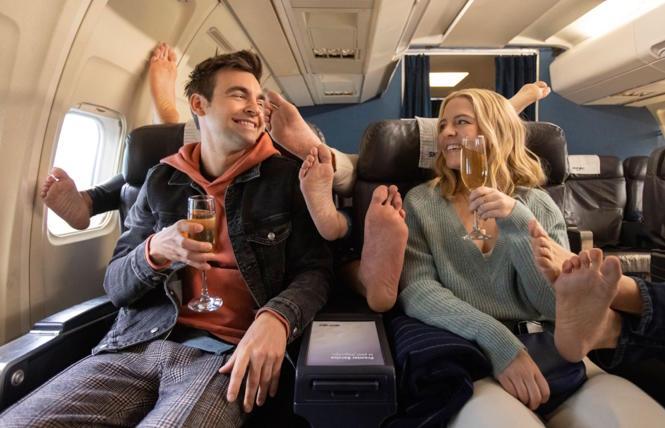 "Fame is a mother," reads the tagline for The Other Two, the acclaimed HBO Max comedy series that just got a greenlight for its third season. Whether or not you've seen the show —and why not?— you've probably already laughed at the writing of the show's co-creator, Chris Kelly. When he and Sarah Schneider were hired to write sketches for Saturday Night Live in 2011, they paired up for some of the most bitingly funny, and timely, comedy of the next several years.

Seven Emmy nominations later, including a Peabody Award for political writing, Kelly and Schneider left SNL after six years when the pilot for their scripted show The Other Two got picked up. Season one, broadcast in 2019 by Comedy Central, introduced us to the Dubek family: Chase (Case Walker) rises to abrupt fame via his Beiber-esque singing. His mom Pat (Molly Shannon) tags along, gaining a chat show of her own.

And then there are Pat's 'other two' kids. Cary (Drew Tarver), a gay struggling actor-waiter, gets asked to butch it up at inane commercial auditions. His sister, Brooke (Heléne York), a former dancer, flounders from job to job. Add some eccentric boyfriends (the adorable Josh Segarra as Lance), tricks, managers (Ken Marino as Streeter) and executives (Wanda Sykes as a trend-making music publicist), plus a slew of celebrity cameos, and hilarious interconnected antics ensue, all with a tickling balance of realism and absurdity.

After a full year's shutdown during the pandemic, Season 2 of The Other Two was finally shot and aired. In a phone interview, Chris Kelly discussed his and Schneider's inspiration for the show, his SNL obsessions that became a career, and growing up gay in conservative Sacramento.

Live from New York
Among the autobiographical moments in the show are some excruciating yet hilarious bits, like Cary auditioning for a commercial role as 'Man at Party Who Smells Fart.'

"Auditioning for it, and being asked to play it straighter, is something that actually happened to me," Kelly, 38, admitted, adding, "Another one —I don't know why I even went in for it— was for a commercial with a guy shoveling fertilizer. I was supposed to pick up a bag and lay some fertilizer. They said, 'Try it again, but think of this as a family guy; he's got a wife,' basically saying, 'Don't be so gay.' So I did it again, while grunting. It was a nightmare. But even so, I remember thinking, 'This will be funny some day, so I can tuck it away.'" 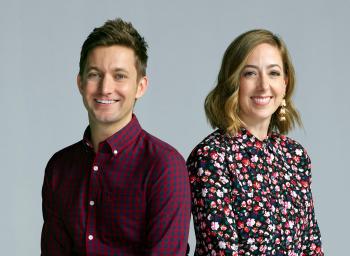 In another episode, Kelly borrowed from his Sheldon High School days performing in plays that he thought, at the time, were better than they probably were.

"I remember playing an architect who was cheating on his wife. I used a measuring tape while talking about leaving my wife: me, gay, 13, sloppy hair and braces. Up until five years ago, in my mind, I thought I was good."

After attending UC Irvine, Kelly soon became a staff writer and director with Funny or Die and Onion News Network, Broad City, and made short films along with some acting. But it was Saturday Night Live that catapulted his career, along with his now-longtime collaborator, Sarah Schneider.

"I would leave high school dances to make sure I was home in time for SNL. I would also record it every week and make my friends watch in Drama class at lunch. I memorized sketches."

As his comedy dream became a real job, Kelly was notably the first openly gay head writer for the show, with memorable sketches and music videos ranging from "Twin Bed" to "Bar Talk," with the real Hillary Clinton offering advice to Kate McKinnon playing her; how meta.

Asked if he found the pressing SNL schedule boosted his creativity, Kelly said, "I need deadlines, and SNL was definitely helpful with that. The pace is relentless. The schedule is sort of the best and worst part. We write everything on Tuesdays; on Wednesday, the sketches are picked, then rehearsed for two days, and then it's done. So you can't overthink yourself. It's good to have someone say, 'Okay; pencils down.'

As for the music video parodies, Kelly added that even the high-production mini-films were made under the same tight deadlines.

"We do location scouting, costumes, then shoot it on Friday, edit on Saturday and it's aired. The schedule's insane. But it's such a well-oiled machine there, with a huge team of people that are used to cranking this stuff out. It kind of spoils you, because it makes you think anything on earth is possible. We'll show up nine hours after a meeting, and the crew has built the most enormous set!"

As an aside, Kelly added, "But then you work on an indie movie and it's, 'Sorry, boys; that's not how it works here.'"

For SNL, "Sometimes you end up with a real stinker, but then it's over. You move on. By the next Tuesday, no one's talking about it. There is something deeply lovely about that. But sometimes you write something really great that you can recall years from now."

With The Other Two, he and Schneider have enjoyed more time to blend more nuance into their own show. "It has been lovely because we get to dig a little deeper, more than you can in a four-minute sketch." 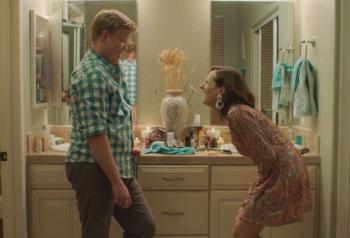 Jesse Plemons and Molly Shannon in 'Other People'

Train-ing Days
To understand the empathy in his comedy, watch Kelly's debut feature film, Other People, his 2016 roman a clef story about a writer (Jesse Plemons) returning to his family's Sacramento home to help care for his cancer-stricken mother (Molly Shannon). The cast includes several notable actors like Bradley Whitford (The West Wing), and even a few folks who would later costar in The Other Two.

Kelly's film captures the joys and doldrums of returning home, whether one has 'made it' or not, even the use of a pervasive repeated song (Train's "Drops of Jupiter") as part of the monotony, which to Kelly became a major aspect of the film.

"That song was non-negotiable from day one," said Kelly. "When you're making an indie movie, a lot of things have to go," he said of financial accommodations. "But I was a real pain in the ass about that song. I convinced my producers to write letters to the band, and it all worked out. But, funny story; when we began shooting, my producers told me we'd gotten the rights to the song, but at the wrap party, they said, 'By the way, we just got final permission; we didn't want to stress you, but we got the song right now.'"

Kelly mentioned how, when he started writing the screenplay about his experiences, despite having written short films and his years with Comedy Central and SNL, "I really didn't know how to write a movie, so I started writing down anything I remembered from that time, even if it's stupid, and I was making lists, and wrote down Train's "Drops of Jupiter," and how it was always on the fuckin' radio!"

Kelly met many fans of Other People on the festival circuit who empathized with the story, having lost family members. "It's good and bad when someone tells me about their loss," said Kelly. "Compliments are nice, but they've gone through a terrible time."

As with both his film and TV show, casting is prime. "The cast is terrific," agreed Kelly of both projects. "I was kind of hobbling it together, one after the other."

For the comedy show, "we wrote the pilot script first," he said. "I thought of Molly for the mother, but I didn't want to bother her, since she'd just done my movie. She was definitely the person we wanted, and when we contacted her, she read it and said yes.

"Once you start filming and writing a whole season, you know who you have to work with. You can hear their voices in your head as you write, and it really helps. That's been one of the nice things about the show; different than the movie," which Kelly wrote a few years before Other People began shooting. 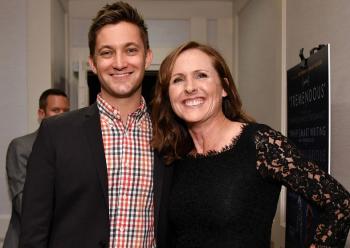 Creative freedom
The second season of The Other Two includes some hilarious pokes at Instagays, the sudden viral nature of leaked nude selfies, even gay awards shows, while the family's connection become more frayed as their varying fame-seeking becomes more bizarre. Instead of promoting a positive-only gay agenda, The Other Two shows our worst selves, while leaving viewers still caring about its characters.

Asked when he felt the freedom to dig deeper into such satirical themes, Kelly said, "I don't think that Sarah and I think of it on a deeper level, like, 'How are we gonna tackle 'Gay.' When we pitched the show, either it was confidence, naiveté, or a combination of both. I'm gay; one of the characters is largely based on me. We didn't think too much about that. You pull stories from your life, and that's the show we made. You just want to write authentically from your experience."

Kelly said that when working with Comedy Central and HBO Max, "No one said, 'It's too gay!' We've been very lucky." Conversely, he did say that several companies passed on it when they initially pitched the show. "I don't know why some passed on it; I guess they were homophobic. Let's go with that," he quipped.

With Comedy Central and HBO Max, he said, "We've had a lot of creative freedom. We have felt very lucky."

But while fame in some ways harms the lives of his characters, who at one point dodge being in 'the industry,' Kelly said it hasn't effected him.

"I'm just a writer. Brooke wants to be known as a manager. She dresses like one, like a little girl playing the role. But by the end of season two, she's actually so much a manager, she doesn't want anyone to know. She wants to be something, but when she is, she doesn't want to talk about being that thing. It's a funny reversal that I don't quite relate to, because I'm a writer, but I get the idea of relating to it." 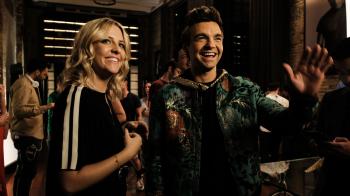 Brooke (Heléne York) and Cary (Drew Tarver) in 'The Other Two.'

Kelly praised Heléne York's portrayal of Brooke. Despite being shot out of order, York brought a transformative arc, from being "scrappy and kind of a liar ... into becoming a woman who realizes that she has power," he said. "She's kind of molded her personality into a way that's helpful. But we still want to see her do some outlandish things."

With the success of the show, and a third season in the formative stages, Kelly looks forward to expanding the many characters who've shaped the show. In creating the second season, the show's longer run-time led to more development.

"We can follow some of the other characters more than we would have been able to, like Drew Tarver (Cary), who we absolutely love to humiliate. He's so good at it. Or, we try the opposite; 'We haven't seen him do this yet."

Asked for details about The Other Two's next season, Kelly said, "We don't know, and I'm not being coy. We only finished mixing season two, like, a month ago. I think it's good to take a little break and collect our thoughts and think about what could be before we dive right in."


The Other Two on HBO Max