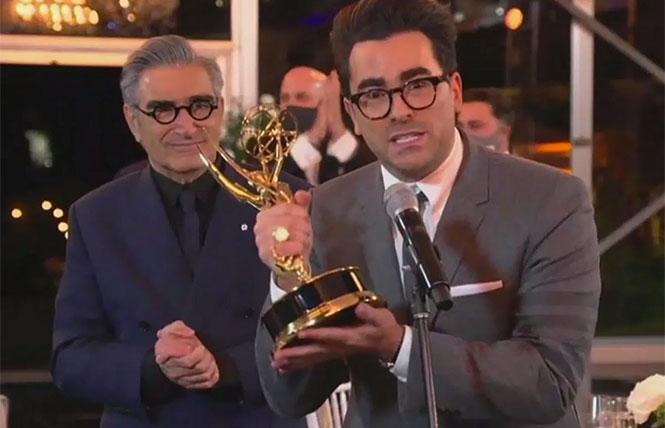 Awards shows are meant to be a frothy romp. A see-and-be-seen extravaganza where we get little snapshots into the lives and closets of our fave actors and performers. So the 71st Emmy Awards was bound to be wildly different—and a bit weird.

Jimmy Kimmel has hosted before, but never like this. The Pandemmys, as Kimmel called them, were a pastiche of Zoom parties with nominees dressed to the nines at home or in small not-quite-socially-distanced and not always masked up parties in hotel or restaurant spaces. (Twitter's favorite lesbian couple, nominee Holland Taylor and partner Sarah Paulson were thisclose as they awaited Taylor's category.)

There were a dozen or so on-site presenters, nearly all Black women performers, including Laverne Cox, who wore the most breathtakingly exquisite black Grecian sheath dress with black lace cutouts and Tracee Ellis Ross, who wore a flamboyant gold satin flamenco-style gown.

LEFT: Jennifer Aniston and Jimmy Kimmel's flaming garbage can RIGHT: Cast members and producers of 'Watchmen' at their own Emmy gathering.

This Emmys was profoundly different in many ways, but the most impactful was that there were more Black nominees and performers represented than ever in Emmy history. Anthony Anderson addressed this in a searing speech that was meant to read as humor but was a real gut-punch. (Watch it online at abc.go.) "These Emmys would have been so Black it would have been like hot sauce in your purse Black," Anderson said. "It would have been Howard University homecoming Black. It would have been 'you fit the description' Black."

HBO's Watchmen was one of the big winners and no series has defined the breadth of what is meant by "Black Lives Matter" —or being invincible— via fiction than that extraordinary series. The show won for best limited series and Regina King and Yahya Abdul-Mateen II both won for their roles. Screenwriter Cord Jefferson gave an impassioned speech about representation and the importance of telling Black stories as well as why therapy should be free.

Another big winner was Schitt's Creek, which swept the entire comedy category. Co-creator Dan Levy, who is openly gay, wore a lovely grey suit —jacket and kilt— and was as queer as could be as he accepted award after award in a Canadian Schitt's Creek party.

RuPaul won for best competition series for RuPaul's Drag Race. RuPaul said, "It is an honor to make television," adding "All the kids get to tell their stories on our show." He ended his speech with a shout out to the LBGT community, saying, "Kiddo, I know how you feel right now. Just know that you are loved and don't give up on love. Believe in love and the power of love." 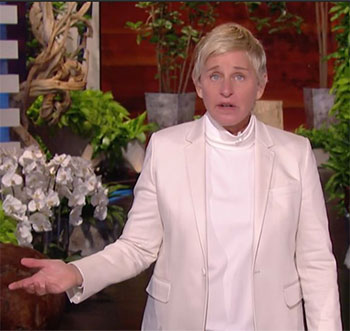 The 18th season of The Ellen DeGeneres Show debuted Sept. 21. In a seven-minute long, straight-from-the-heart opening monologue, DeGeneres addressed the controversy over alleged discrimination at the show and accusations of a toxic workplace. Staffers had made serious complaints of "racism, fear and intimidation." Some said they had been fired after taking time off for medical leave or bereavement. One former employee said she was the victim of racist comments from staff members.

In late July, Warner Bros. began an internal investigation which concluded in August. Ellen had spoken to her 270 employees afterward during an emotional apology via a video conference. The show's executive producers and head writer —all white men— were ousted.

Ellen said the show had started a "new chapter" with her being more hands-on and aware. She apologized again, saying, "I want to say I am so sorry to the people that were affected. I know that I am in a position of privilege and power and with that comes responsibility and I take responsibility for what happens at my show."

Ellen also addressed accusations that she is not who she appears to be. She noted she has played straight women in films and "So, I'm a pretty good actress, but I don't think that I'm that good that I could come out here every day for 17 years and fool you."

She said, "This is me. And my intention is to always be the best person I can be. And if I've ever let someone down, if I've ever hurt their feelings, I am so sorry for that."

Ellen is a top moneymaker for NBC and Warner Bros., with her daytime and prime time series. The Ellen DeGeneres Show garners higher ratings than any other daytime offerings. 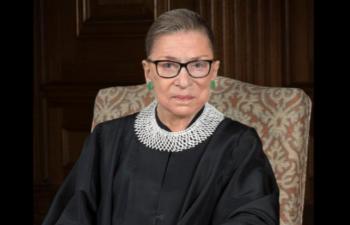 Everyone dies. So we all knew it would happen sometime. Ruth Bader Ginsburg was, after all, 87 and she had battled several different cancers over the past 20 years. And yet, RBG, as she was affectionately known, seemed indomitable. The night before her death she was accepting an award at the Constitution Center in Philadelphia, albeit virtually. But if she could do that, how could she die mere hours later?

The tributes to her and fight over her successor —and who will get to make that choice— will be the fodder for cable and other news for the next couple weeks. That Trump could replace the premiere woman jurist in American history with an anti-feminist, anti-choice, anti-LGBT+ far-right extremist seems inevitable in this moment, but we can hope for better. And of course we can vote in her honor.

Ginsburg was famous long before she became only the second woman to ever be appointed to the U.S. Supreme Court and CNN Films' RBG details her many accomplishments and how she brought women's rights into the courts. It is fun and energizing, with a broad and deeply affectionate perspective on Ginsburg's career, with interviews with the jurist as well as the iconic scene of her in the gym that fast became an internet meme.

On the Basis of Sex is a bio-pic about Ginsburg's years as a law student, wife, law professor and co-litigator with her husband, Martin Ginsburg, on the 1972 gender rights case Charles E. Moritz v. Commissioner of Internal Revenue. Felicity Jones plays Ginsburg as earnest and forthright—which she remained throughout her long, accomplished life.

On the Basis of Sex is also about the fight for gender equality in America. Ginsburg is presented as who we knew her to be in her later decades: a shrewd, focused yet deeply compassionate legal tactician and a stalwart advocate for progressive and civil rights causes.

May her memory be as a blessing—and a revolution.
Life comes at you fast in this current climate, so you really must stay tuned.