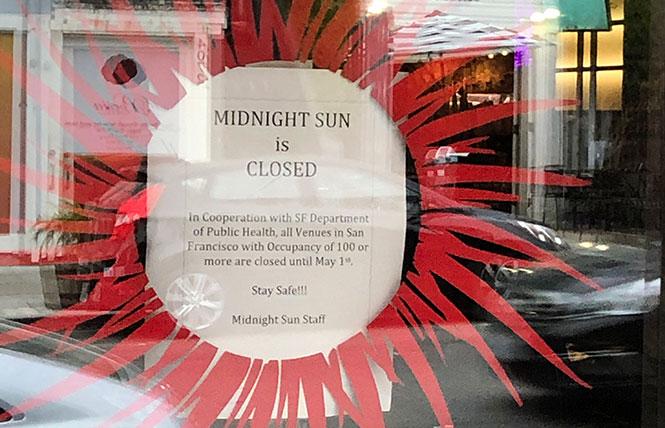 The Midnight Sun temporarily closed last Friday, before a statewide directive from Governor Gavin Newsom that all bars and nightclubs in the state shutter due to coronavirus. Photo: John Ferrannini

Almost all LGBT nightlife spaces in California are shuttered after Governor Gavin Newsom's Sunday directive that bars, nightclubs, wineries, and breweries should close in response to the novel coronavirus outbreak.

A health order was implemented in San Francisco and five other Bay Area counties Tuesday, March 17, telling people to shelter in place through April 7. (See related story.) Bars are closed, and restaurants are open for take-out only. 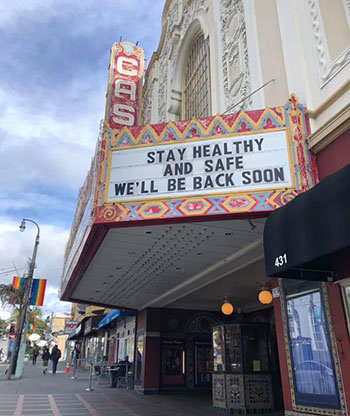 Wave builds
The wave of en masse nightlife venue closures began the afternoon of Friday, March 14, as many were preparing for the beginning of St. Patrick's Day weekend festivities.

Around 4 p.m., Mayor London Breed announced an order from the health officer restricting non-essential social gatherings of over 100 people through April 30 due to the coronavirus outbreak.

Within hours, Castro bars Beaux, at 2344 Market Street; Midnight Sun, at 4067 18th Street; and the Cafe, at 2369 Market Street, closed, along with South of Market bar Powerhouse.
But it was just the beginning. Some bars, such as the Edge, 440, Hi Tops, and Lookout, remained open for the weekend while having staff restrict the number of occupants.

Saturday brought more closures, with South of Market bars the Eagle and the Stud announcing that they would close through April. It was the first time that the Stud had closed since its opening in 1966.

"The city of San Francisco has decided that during the pandemic it's better for clubs of our size to remain closed for the next 7 weeks. For now, they're telling us that we can reopen on May 1st," venue representatives wrote in a Facebook post early Saturday evening. "City Hall has always supported us, and we support them in this decision. Stopping the spread of the virus and protecting the vulnerable members of our families and community has got to be the first priority for everyone." 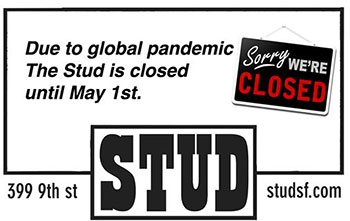 Opened one day, closed the next
Just days earlier, the Stud announced its intention to stay open while restricting its occupancy to 250 people (which was in line with guidelines that were current then).
Castro bars Toad Hall and Badlands, both owned by gay local landlord Les Natali, also stayed open.

In a post to its Facebook page Saturday afternoon, Toad Hall said it was restricting the number of people it would be letting into the bar.

"Note: due to coronavirus precautions our occupancy has been reduced until further notice," read the post, which was similar to one posted on Badlands' Facebook page. Badlands, more of a dance club, also announced it would not be charging its normal cover charge to get in.
South of Market nightclub OMG also planned to remain open. 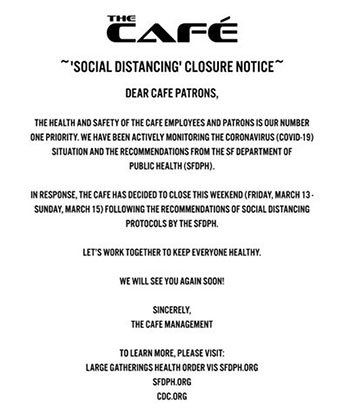 But all that changed again by Sunday afternoon. Officials nationwide were calling for bar closures after St. Patrick's Day festivities brought out crowds Saturday in New York City, Boston, and Chicago.

Although Newsom's Sunday afternoon order did not have an enforcement mechanism, by Sunday afternoon bar patrons and workers seemed resigned to the fate of being closed for business indefinitely. Badlands and Moby Dick were closed by Sunday evening, while Toad Hall, The Mix and Lookout waited until the late hours of Sunday night.

As of Monday morning, only Hi Tops had a sign saying that it intends to stay open — but it will be "operating as a restaurant based on the rules issued by the state."

"Please take care and keep your distance from others inside. We will be doing our best to provide a safe and clean environment," the notice read. 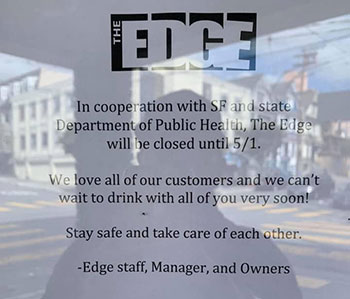 A sign on the door of The Edge bar. photo: Erick Lopez

Take-out only
Hi Tops was limited to take-out only beginning March 17 due to a health order issued by San Francisco and five other Bay Area counties Monday that called for people in non-essential businesses to shelter in place and closed the seating areas of restaurants. Co-owner Jesse Woodward announced on his Facebook page that Hi Tops is "open for delivery on Caviar and Uber Eats if y'all need a fried chicken fix."

"Our hope is to be able to continue this for the extent of the lockdown and be able to keep our kitchen staff employed," he added.

Port Bar in Oakland remained open through the weekend. So too did Level 13, which as the Bay Area Reporter previously reported, hosts the LGBT parties that used to be at the now-shuttered Club 21. But Level 13 closed late Sunday. Port Bar closed as it was getting ready to open Sunday afternoon, according to co-owner Sean Sullivan.

Sullivan said that Port began social distancing policies last Friday, although Alameda County did not mandate it to do so. (Alameda County is one of the participants in the region-wide shelter in place order.) 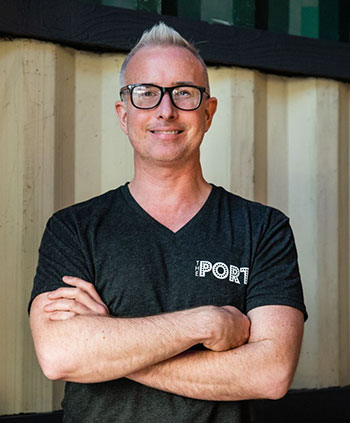 "We couldn't allow the room to be so packed as it had been during the previous 'Drag Race' parties, as fun as they are," Sullivan said in a phone interview with the B.A.R. March 16, referring to the popular RuPaul's Drag Race TV show.

Sullivan, a gay man who owns the Port with his partner, Richard Fuentes, said he expects the bar to reopen when the crisis is over.

"We're playing it by ear for now," Sullivan said in a phone interview Monday. "We're most concerned about our staff and our very talented performers, who are independent contractors and can't rely on unemployment. Whether we can open in two weeks or two months, we will shoulder on."

Sullivan said he is also worried about LGBTs who won't have a safe space to turn to due to social distancing.

"We stayed open as long as we did because loyal customers asked us to and our heart goes out to people in our communities who came to Port because their home situation didn't allow them to be fully themselves," Sullivan said. 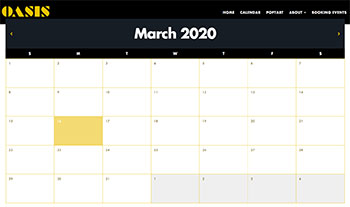 Sacto scene
Sacramento LGBT bars the Depot and Sidetrax, and nightclubs Badlands and Faces, also announced their closures. So, too, did San Jose nightclub Splash (which shares ownership with several of the Sacramento bars).

"We agree that this is the best course of action for the safety of our staff, guests and the entire community," stated TJ Bruce, the owner of all the aforementioned bars except Faces, in a Facebook post. "We have moved quickly to close all of our locations effective immediately. We thank you for your support and understanding."

"When this crisis is over we will be here to celebrate together. Stay healthy my friends," he added.

Some options for nightlife workers
Now suddenly out of work due to the pandemic, several efforts are underway to try and help bartenders, barbacks, doormen, DJs, drag artists, and others affected by the closures.
Bartenders can apply for the Bartender Emergency Assistance program (https://www.usbgfoundation.org/beap) of the USBG National Charity Foundation. California workers who have had their hours reduced or halted because of the coronavirus outbreak can file an unemployment insurance claim.

The City and County of San Francisco announced measures Monday to provide paid sick leave for people impacted by the coronavirus — although this will have a stunted effect on the nightlife industry, which is largely paid in tips.

"We want to help compile lists and resources for this — who can to support and donate to these vital and creative members of our community," Bieschke wrote. "We're going to keep a running tab of resources for the community here to amplify."

Stuart Schuffman, the local columnist better known as Broke-Ass Stuart, came out with a list (www.brokeassstuart.com) of recommendations to those who want to help artists, performers, and service industry workers.

These included direct Venmo payments, buying their merchandise or art, buying gift cards for future use, booking them for future events, not asking for a refund for canceled events, and amplifying social media posts and positive reviews.

At least one bar owner, Modi of OMG, plans to pay his employees at least $5 per hour for the hours they would have worked had the bars not been shut down.

"Granted that is not nearly enough for them to live on, pay rent or other expenses, considering they depend heavily on tips plus their hourly wages," Modi wrote in a Facebook post late March 15. "However, even earning $5 an hour will at least get them basic essentials like food to sustain themselves through these tough times until we reopen."

Modi also created a GoFundMe (www.gofundme.com) to support OMG staff. It had raised $1,000 as of Tuesday morning.

Another GoFundMe (www.gofundme.com/f/beaux-employee-emergency-relief-fund) was set up for the Castro nightclub Beaux, which has raised $2,055 as of Tuesday morning.

A GoFundMe was set up for staff at the Mix on Tuesday afternoon (www.gofundme.com/f/mix-staff-emergency-help). It had not raised any money at press time.

Kevin Harrington of Last Call at 3988 18th Street shared with the B.A.R. Tuesday afternoon efforts to promote a GoFundMe (www.gofundme.com/f/support-last-call-bartenders) for the employees of that Castro spot. It had raised $795 as of Tuesday afternoon.

Nightlife in the age of coronavirus
Some people are looking at ways that nightlife can continue in some form under the current conditions.

Adriana A., a DJ with Bootie Mashup, wrote on Facebook that she was "setting up a Bootie Mashup internet radio station" so people can listen to music at home.

Local drag artist Juanita MORE! suggested that as strong as the human urge is to have private get-togethers, people should stay at home as much as possible. She stated this point in an email with the subject line, "Stay the fuck home."

"I know — it's not easy, and it's your friend's birthday, so you all want to go out for dinner or drinks. But! No. Again: Stay the fuck home," MORE! wrote. "As of today, I have heard from two friends in San Francisco that they've tested positive for COVID-19, and they are now in self-isolation along with their roommates. They are both young and healthy and are expected to recover from it.

"We have been raised in bars, nightclubs, and on dance floors. But we will be going into crisis mode very soon, and we are going to need to figure out how to entertain and support each other when that happens," MORE! added. "In California, Governor Gavin Newsom just ordered the shutdown of all bars, nightclubs, and brewpubs in the entire state. When this is all over I promise you one helluva a huge party."

To avoid COVID-19 (the illness caused by the novel coronavirus), the city's Department of Public Health is advising people to wash their hands with soap and water for at least 20 seconds, avoid touching their faces, cover their coughs and sneezes, try alternatives to the handshake, and stay home if they are sick.

If you are aware of more efforts to help nightlife workers and creative ways people are continuing nightlife during the coronavirus outbreak, let us know at j.ferrannini@ebar.com