Persistence & difference in 'The Daughters' 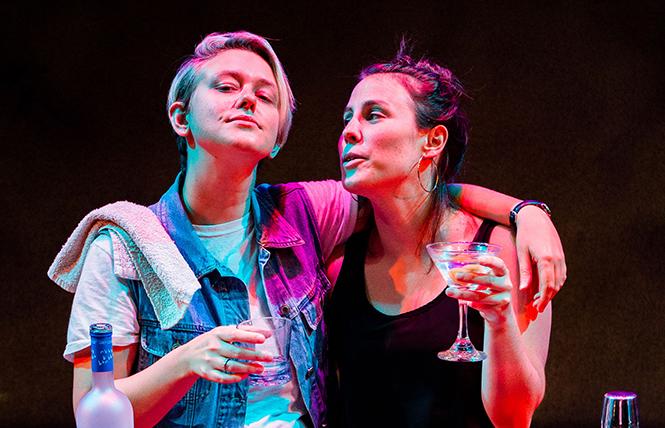 Evelyn, a 20ish ingenue in a cheery floral-print dress, wears a grin of unabashed delight through most of the first act of "The Daughters," which runs through this weekend as part of the San Francisco Playhouse's developmental Sandbox Series.

It's 1955 when the comic drama begins, and Evelyn, played with palpable curiosity and a mischievous spirit by Olivia Levine, is attending the first-ever gathering of The Daughters of Bilitis, the pioneering lesbian activist organization. She's tickled pink to be here, and audiences will be, too.

Mal is a Roberts Rules of Order-type who wants the evening to be organized and efficient; Shorty and Griff are primarily here for the prospect of cocktails and same-sex dancing; Vivian seeks flirtatious escape from her East Coast life, where she's married to a gay man in a mutually stressful deception. Peggy struggles to please everyone at once. And watching them all, dear Evelyn gets to discover first-hand that lesbianism is a many-splendored thing: personal and political, tied to both gender and sexuality, sometimes fractious, sometimes flat-out fun.

That variety of perspective and personality, that sense of simultaneous lesbian diversity and unity, is playwright Patricia Cotter's most salient point. This may strike some San Francisco audiences as old news, but I can't recall it being at the center of a play before. Regardless, between Cotter's sharp dialogue and director Jessica Holt's brisk pacing, old news is good news.

"The Daughters" is smart and funny and overdue. The origins of the American gay men's movement were portrayed on stage a decade ago in "The Temperamentals," John Marans' dramatization of the early days of the Mattachine Society. After covering parallel historic ground, "The Daughters" boldly leaps forward to a second act (and second set of characters) set in 2015, at the Lexington Club, San Francisco's last lesbian bar, on its final night in business.

Rather than playing a congratulatory "You've come a long way, baby" card, this second scenario echoes and complicates some of the issues touched on in the first. We see the uneasy reunion between a character and her former girlfriend, now a trans man (Shaiken, in a tender, subtle variation on her first-act role); we meet a woman who remains fiercely attached to butch-femme dichotomies (Simon, a paragon of comic bravado); and, most intriguingly we hear arguments about whether there's a need for lesbian-only spaces in an era where gender-fluidity is in the spotlight.

"The Daughters" leaves the audience at our own place in history, stepping curiously into Act III.