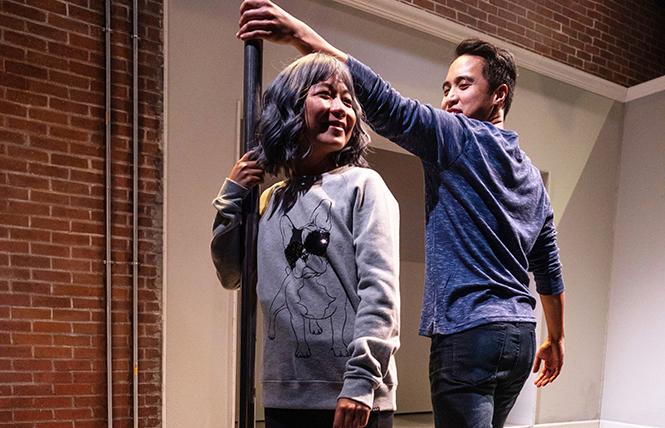 "Elevada" is a tonic. This singular whatchamacallit of a show, being presented by the Shotgun Players through November 17, effervesces with an offbeat creativity that will lift audiences out of the doldrums as they watch its characters get swept off their feet. It's a riff on rom-coms that largely replaces cornball sentiment with a cornucopia of quirks. Silly accents, impromptu dance routines, glittery projections and totemic Bulgarian deer skulls are all on tap. It's a theatrical shaggy dog story. There's even an unseen shaggy dog named Fisherman.

"Is this weird?" Kahlil (Wes Gabrillo) asks Ramona (Sango Tajima) after they meet cute then veer peculiar in the first scene. Yes.

"It feels weird, but I want to keep on going," he adds. Agreed, heartily.

He's a tunnel-visioned internet whiz-kid about to score a major deal. She's a lifelong wallflower jolted into devil-may-care outgoingness by a recent cancer diagnosis. She thinks she's on the eighth of a frantic series of Tinder-facilitated first dates. He thinks she's a marketing consultant, there to pitch a polish of his personal brand. His well-meaning roommate has done some surreptitious swiping on Kahlil's phone, then sent him off for this alleged business appointment.

As soon as we're introduced to them, we know that the roomie, Owen (Soren Santos), a sweet, slovenly recovering addict, and Ramona's stern and lovingly overprotective older sister June (Karen Offereins) are also inevitably bound for coupledom. Offereins and Santos each find surprising depth in what are essentially boilerplate characters.

Sheila Callaghan's loopy script draws a parallel between Ramona's terminal illness and Kahlil's ill-defined agreement to sell his selfhood to a major corporation, allowing himself to be fragmented into digital oblivion. You needn't (and won't be able to) understand the details; the gist is that our lovers are both living on borrowed time, which frees them to get all giddy and Id-dy: Ice-skating! Pole dancing! Spontaneous nookie!

Under Susannah Martin's direction, Shotgun's stagecraft is as playful as the script. While Erin Gilley's projections feature film clips of New York that drop us right into "When Harry Met Sally" territory, the slick mechanics of Mikiko Uesugi's sliding panels and set-pieces never let us forget to appreciate the alternate magic of live theater.

Likewise, in a show that happily leans on commercial movie tropes, Martin and her cast lend the inevitable romantic complication a surprising gravitas. After a stunning projection-enhanced sequence in which we see Ramona take a long, lonely subway ride to what may well be the afterlife, we meet her again. She's still very much alive, but a far more troubled character than we'd been led to assume.

In keeping with rom-com tradition, everything is tidied up in the end. But rather than an intimate onscreen kiss, we get an expansive theatrical finale. Without giving too much away, it involves a tango. It was only on my way out of the theater that I learned the play's never-spoken title refers to an aspect of that Argentinian dance. Until then, influenced by an early bit of dialogue about the pharmaceutical industry, I'd assumed differently. And even now, I'm still pleased to prescribe "Elevada" as a highly efficacious mood-enhancer.