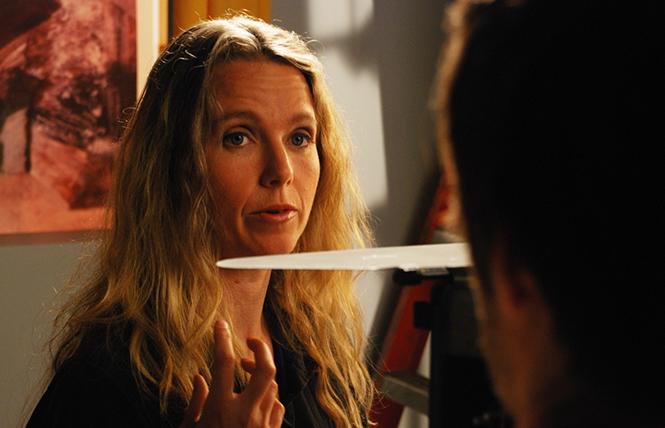 There are times when the emotionally freighted source of a creative work is more powerful than the art it inspired. Such is the case with "Daria Martin: Tonight the World," a new installation at the Contemporary Jewish Museum. It counts among its fascinating components: partially obscured pages of disquieting dreams conscientiously recorded by the artist's grandmother; a 13.5 minute film based on those dreams, presented in enigmatic vignettes; and "Refuge," a videogame on a similar theme.

The combination of Jungian psychoanalysis; memories of pain, loss, terror and tragic displacement at the hands of the Nazis; and trauma passed down from one generation to another makes for a potent back-story. Over a 37-year period, Martin's grandmother, Bay Area painter Susi Stiassni, documented dreams of fear, dread, danger and intruders that had been buried in her unconscious, a daunting project she undertook in conjunction with psychoanalysis, which she began in the 1970s. The film, which unfolds in five chapters, extracted five dreams from the 20,000-page archive Susi left behind after her death, all of which took place in her childhood home, a modernist mansion in Brno, Czechoslovakia. Dubbed Villa Stiassni, it was designed for her Jewish industrialist parents in 1927, by noted architect Ernst Wiesner. Faced with the imminent threat of the German invasion, Susi, then a teenager, was sent to boarding school in England. Her family, forced to flee and abandon their home in 1938, escaped the Holocaust and settled in Marin County, where Martin grew up. As for the fate of the villa: the Gestapo seized it. After the war it was occupied by a series of Czech officials, before being designated a heritage site. Martin was allowed to shoot her film there, but Susi never returned to the scene, except when she was sleeping.

"The show is a container for the dreams," says Martin, an Oxford University professor who has been making cryptic films for over two decades. Her previous works include "The Hunger Artist" (2017), an allegorical piece based on a Franz Kafka story; and "Soft Materials" (2004), where naked dancers interacted with machines in a Swiss AI laboratory. She initially studied to be a painter, emulating her grandmother, who worked with Sight and Insight, Ann O'Hanlon's Mill Valley painting group. A space at the rear of the gallery displays several of Susi's paintings. "She's why I became an artist," explains Martin, who channeled interests in psychology, theater and narrative into filmmaking.

Her latest film and the show's centerpiece, "Tonight the World," has no clear beginning or end, its strange, out-of-body aura enhanced by the presence of four actresses of different ages portraying Martin's grandmother as well as other characters. In one episode, a woman wandering through the villa comes upon two kids in cowboy outfits and a hole in one of the walls. When she peers through it, the eye of an animal stares back at her from the other side. Undeterred, she punches out a larger opening and discovers a man in an undershirt eating dinner from a frying pan. Though ambiguous in meaning, it seems to allude to Jews who lived inside walls to avoid detection by the Nazis. Susi must have overheard these frightening tales and at an early age acquired an understanding of what it meant to be dispossessed.

300 pages from her original diaries referencing Brno are mounted behind a diagonal wall with several open "windows" mimicking the villa's architecture, but the text is just far away enough to be indecipherable. But across the room, five heavily edited entries on which the film is based are legible behind Plexiglas frames. The content makes for riveting reading and will leave visitors hungering for more. "I am like an animal myself in that I'm being hunted," Susi writes. "My white skin will give me away at night. I don't have long to live."

The vividness and fierce intensity of these dream diary excerpts, portions of which also zip by onscreen between chapters, resist translation into another medium. Despite upending logic and time, these staged encounters don't quite convey the disorientation, estrangement and depth of disturbance embedded in ominous dreams that inevitably were more loaded for the dreamer than for the viewer.

The passage quoted above relates to the most harrowing sequence, where a desperate, bedraggled woman is seen in the woods foraging for food and attempting to elude her pursuers as darkness falls. It isn't long before soldiers, dressed in camouflage, appear. The youngest, a child with a soft face, aims his gun at her, then lowers it. We hear a gunshot and witness the woman fleeing on foot through the trees.

"Although my grandmother's story was quite specific to its time and place, I think most people can relate psychologically to the feeling of being an exile," Martin said in a recent interview. "Anxiety dreams about loss are something everyone can understand." In "Tonight the World," irretrievable loss echoes across the frontier.