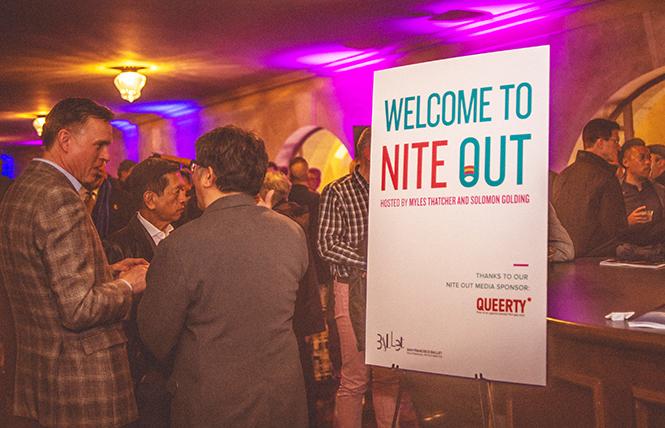 Scene from one of this San Francisco Ballet season's NiteOut parties for the LGBTQ community. Photo: Mario Elias

It was another exciting week of culture-hopping over in Out There-land! Let us walk you through it.

Last Friday night we were absorbed by the splendor of San Francisco Ballet's opening night performance of choreographer John Neumeier's "The Little Mermaid," reviewed in this week's issue by Paul Parish. The ballet sent us over the moon, if also under the sea. Afterwards came the last of this season's "NiteOut" soirees for the LGBTQ community and our straight allies, complete with libations, bites, partying dancers and sparkly face-painting downstairs in the Opera House bar. Hosted by gregarious dancer-choreographers Myles Thatcher and Solomon Golding, this month's NiteOut party recognized SF's GLBT Historical Society. Nick Large ("Yes, like the size") from the GLBTHS Board of Directors accepted the honor.

It's worth noting that in this adaptation of Hans Christian Andersen's tale, both the Mermaid and the Poet are head over heels (or tail) in unrequited love for the humpy, bare-chested Prince. Mermaid, we wanted to tell her, don't forsake your watery paradise for the malevolent human male. Poet, find a gay bar. 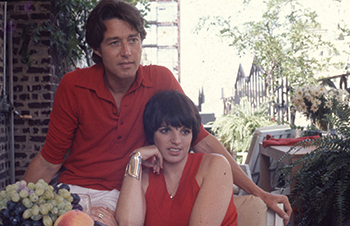 The next night we were in the house of SFMOMA for the SFFILM Festival's West Coast premiere screening of director Frederic Tcheng's "Halston," a look at the life of the brilliant if doomed fashion designer. Director Tcheng, producer Roland Ballester, Halston designer Naeem Khan, and Halston's unnamed nephew were present at the screening, enthusiastically introduced by SFFILM exec director Noah Cowan and presenting host Mark Rhoades.

Halston was an artistic genius, a megalomaniac and a control freak, and his ever-expanding empire eventually imploded under the weight of his ambition. But for a spell he was the most famous fashion designer on the planet, a talent on the level of Cristobal Balenciaga, and the 1970s and early 80s could legitimately be called "the Halston era." This doc, though burdened with a superfluous framing story, brings us right back to his milieu: Studio 54, Andy Warhol's Factory, Halston introducing "hot pants," mixing couture with ready-to-wear. There are a lot of charismatic persons parading through the proceedings — jewelry designer Elsa Peretti makes a spirited defense of cocaine addiction. But the absolute most fabulous talking head belongs to none other than Liza Minnelli, who refuses to dish her best friend Halston because she knows what trash-talking did to her mother, the immortal Judy Garland, and father, the film director Vincente Minnelli. This movie increased our respect for her exponentially. 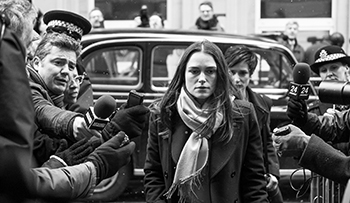 Closing night for the 2019 SFFILM Fest came all too soon. The closing-night film was director Gavin Hood's "Official Secrets," a true story in which intense actress Keira Knightley plays Katharine Gun, a whistleblower working for the UK's intelligence agency who leaked internal emails documenting governmental deceptions that led up to the second Iraq war. In a new twist, the fest's closing-out party came before rather than after the night's screening, with a lovely reception in the new SoMa restaurant Palette, in the former Lulu's space. The SFFILM Fest has unwrapped all its packages for this year, and we can only marvel at their bounty.