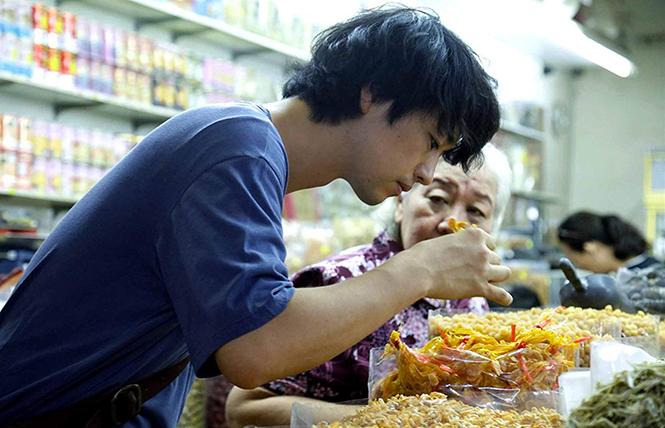 As "Ramen Shop" begins, the delicately handsome, soft-spoken Masato (Takumi Saito) discovers his chef father dead in the kitchen of their tiny Singapore noodle restaurant. He tries to overcome his grief by investigating how his dad met and married his Chinese mom, who died when Masato was still a boy. In marrying an older Japanese man, Masato's mom was violating social taboos around Chinese people fraternizing with citizens of the nation that had treated them so abominably during WWII.

Going through his dad's things, he uncovers photos of his parents as a young couple, and a tiny notebook full of recipes in his mother's handwriting. The book prompts the young man to reconnect with his mom's family. Her mother is an angry old woman who still harbors bitter feelings towards the Japanese invaders and the wounds of war. Director Khoo shows how people with tragic histories can negotiate brighter futures through shared experiences, such as the preparation and enjoyment of a truly spectacular cuisine. From the opening shots of food being sliced and diced, woks and pans, and cooks preparing a special pork-rib soup that takes over 10 hours of simmering, "Ramen Shop" is a gastronomical sensory overload.

As our guide to fraught memories and fine dining, one-time male model Takumi Saito is himself a picture of grace and understated beauty. By picture's end you're as happy that he finally gets to try his grandma's soup as if he had just met the girl or boy of his dreams. Shot in widescreen format, "Ramen Shop" runs 90 minutes. Characters speak Japanese, English, Mandarin and Cantonese, with English subtitles. Opens Friday.