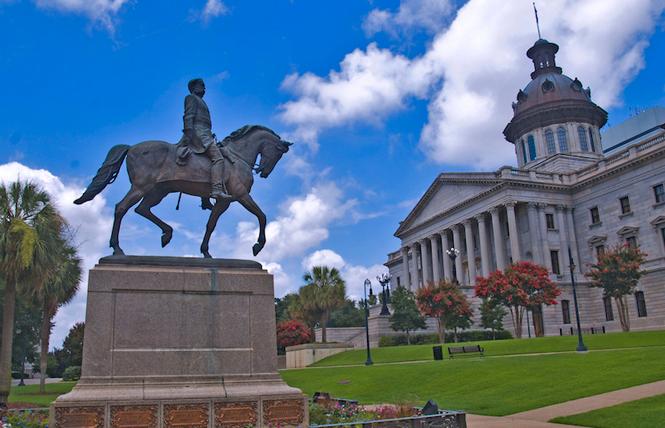 Effective April 15 California will ban state-funded travel to South Carolina due to lawmakers in the Palmetto State enacting anti-LGBT legislation. It becomes the 10th state on the "no-fly" list for government workers, academics, and college sports teams at public universities in the Golden State.

California lawmakers in 2015 banned state-funded travel to states that discriminate against LGBT people with the enactment of Assembly Bill 1887 authored by gay Assemblyman Evan Low (D-Campbell). There is a waiver for trips deemed essential, such as sending emergency assistance in response to a natural disaster, otherwise any travel to the states on the banned list cannot be funded by public tax dollars.

Tuesday, California Attorney General Xavier Becerra's office announced South Carolina would join the list due to "a discriminatory provision buried deep within a general budget bill" that South Carolina lawmakers enacted July 5 last year. While the law, H-4950 Paragraph 38.29, did not single out LGBT people, it enabled private faith-based adoption agencies to deny placing a child with adoptive parents who do not conform to their religious beliefs or moral convictions.

"Although H-4950 does not mention sexual orientation explicitly, it is written broadly enough to authorize such discrimination," explained Becerra's office as for why it was adding South Carolina to the travel ban list.

"The state of South Carolina recently enacted a measure that sanctions discrimination against families in the placement of children in need of homes. The state of California stands strongly against any form of discrimination. AB 1887 authorizes my office to make that promise real," stated Becerra.

San Francisco maintains a similar list of states it restricts city workers from traveling to, as well as entering into contracts with businesses based in that state, for having anti-LGBT laws. It is following Becerra's move in adding South Carolina as the 10th state on the city's list.

City Administrator Naomi Kelly, who oversees the list, does plan to add South Carolina, Bill Barnes, a gay man who is a project manager in Kelly's office, confirmed to the Bay Area Reporter.

The city's ban will also go into effect April 15.

Supes advance Milk terminal sign rules
The supervisors' budget and finance subcommittee Wednesday advanced an ordinance that spells out how the signage for Harvey Milk Terminal at San Francisco International Airport should look like both inside and outside the aviation facility. The full board is expected to approve it Tuesday, and Mayor London Breed's office has told the B.A.R. she will sign it into law.

The city is renaming Terminal 1 after the late gay icon, the first out person to win elective office in both San Francisco and California. But advocates of the Milk naming honor and airport officials have differed over how the terminal's signage should appear.

At a supervisors hearing last month, airport director Ivar C. Satero presented a mockup of the exterior signage that included Milk's name at only one of the terminal's entrances. It prompted District 9 Supervisor Hillary Ronen to amend her ordinance about the signage to require SFO officials to include Milk's name on every sign for the terminal at the airport.

She had initially brought forth legislation requiring Milk's name be in a larger font size and before the Terminal 1 designation. She did so after airport officials in the fall unveiled plans for the Milk terminal that showed its signage gave more prominence to Terminal 1 rather than Milk's name. They had argued doing so would prevent airport passengers from getting lost.

But Ronen, Milk's family, and LGBT advocates pushed back against the airport's plans. The supervisors were set to approve Ronen's ordinance last week, but because of the $1.3 million estimated cost for replacing all of the Terminal 1 signs it was sent back to committee.

Gay District 8 Supervisor Rafael Mandelman, District 4 Supervisor Gordon Mar, and District 6 Supervisor Matt Haney are co-sponsors of Ronen's ordinance. The naming honor for Milk at the airport has been an arduous bureaucratic slog, as gay former San Francisco supervisor David Campos, whom Ronen had worked for, first proposed in 2013 naming all of SFO after Milk.

When that proposal didn't fly with much of the public, Campos and the late mayor Ed Lee compromised on naming one of SFO's four terminals after the beloved gay leader, who was assassinated in 1978. It wasn't until last year that the choice of Terminal 1 was finalized.

The ongoing signage debate led Equality California, the statewide LGBT advocacy group, to rescind an award it had planned to bestow on SFO at its local gala fundraiser May 11 ahead of this year's Harvey Milk Day, which the state observes annually on May 22, Milk's birthday.

The first travelers to use the Milk terminal, currently undergoing a yearslong $2.4 billion renovation, are expected to do so this summer when a portion of the facility reopens. The project is slated to be complete by 2024.

Assemblymen David Chiu and Phil Ting, along with gay Senator Scott Wiener have teamed up to hold a conversation with their constituents that will be moderated by KQED reporter Thuy Vu. It should be a lively affair, as groups opposed to Wiener's changes to the state's conservatorship laws are planning to protest at the event.

Last year Wiener authored Senate Bill 1045 to allow local jurisdictions to force homeless people who have been repeatedly detained and suffering from mental illness and substance abuse issues into services if they refuse to do so on their own. But restrictions added to the bill reportedly mean it will only apply to less than a dozen people in San Francisco.

To expand its scope, Wiener this year has introduced SB 40. Groups opposed to the legislation have asked people to attend the town hall and make their views known.

In order for SB 1045 to take effect, the city's Board of Supervisors must first adopt it. While the mayor and Mandelman support doing so, other supervisors remain concerned about it. It is unclear when the board will hold a hearing on it.

As for Wiener's SB 40, the Senate's Judiciary Committee is expected to take it up at its hearing Tuesday, April 9.

The lawmaker's town hall will take place from 11 a.m. to 12:30 p.m. at the UC Hastings School of Law's Louis B. Mayer Room at 198 McAllister Street in San Francisco.

Chiu plans to livestream the town hall on his website at https://a17.asmdc.org/.

Web Extra: For more queer political news, be sure to check http://www.ebar.com Monday mornings for Political Notes, the notebook's online companion. The most recent column reported on gay presidential candidate Pete Buttigieg's promise to sign the Equality Act into law.