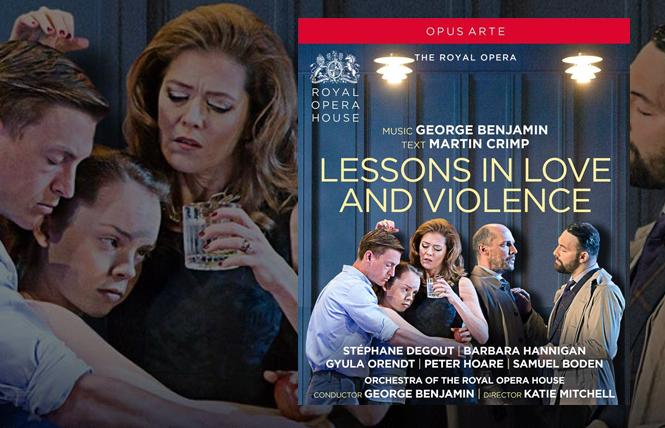 "It's nothing to do with loving a man," government prosecutor Mortimer screams at King Edward II at the beginning of George Benjamin's third opera, "Lessons in Love and Violence." He pays heavily for his Polonius-like dissembling before it's all over, but the syllabus for "Lessons," which includes teachings on other subjects, does not omit everything to do with a man loving a man.

Opus Arte's new video of the 2018 London Royal Opera premiere — which, like Benjamin's previous opera "Written on Skin," has already spawned performances by musicians in addition to those in the traveling shared production — solves the piece's principal problem for the audience. Enough of the vocal music is layered — and, in contrast to the intimacy of "Skin," erupting in frequent, sudden, sometimes big ensembles — that subtitles count for much.

Brilliant and abiding as "Skin" has proved, it predicted that there was more where it came from. Although it clocks in at a comparable 90 minutes, "Lessons" is in all respects a bigger opera, harder work for everyone if a giant step farther away from "Tosca." It yields greater dividends on successive encounters, but what matters is that it also pays up-front. Like "Skin," it shows all of itself to first-timers.

It's in this that it's least like the operas of Thomas Ades, who otherwise could be Benjamin's more extroverted, equally multifaceted musical double. Except for "Powder Her Face," Ades' dazzling one-act debut in the form, his operas remain work, all of it hard and geared to connoisseurs. You don't exit "Lessons" whistling its tunes, either, but Benjamin, his librettist Martin Crimp and a roster of musicians for whom he conceived the music parlay so focused an ensemble effort that you get that rarest of payoffs: forgetting that you're in the theater.

The story of Kind Edward's fatal love for his favored courtier Gaveston is best-known from the play by Christopher Marlowe. Without being heavy-handed about it, Benjamin and his team, including director-designer Katie Mitchell, make it present-day, not just modern-dress. There's hollering about Edward's being "not fit to rule," and his third-in-the-bed wife Isabel frequently acts like FLOTUS with better English, but you never get topically distracted from a taut story whose every horror leads to one worse.

The huddled, starving masses hauled before the king are in their way as convincing individually as their counterparts in Verdi, and Isabel's dissolving a pearl in vinegar to show them that its value is not just what it can buy is momentarily show-stopping. The court's preference for culture over populace self-destructs before our wondering eyes, culminating in a savage play within the opera.

What leapt out at me this go-around was Crimp's harping on the subject of music itself. Like the pearl, his text says in many ways, music has no predominant let alone absolute value, even or perhaps especially in a court where entertainment holds sway — a striking note to sound in an opera libretto. But there's no time in "Lessons in Love and Violence" for a recess for sentimentality.

That said, it's Benjamin's translucent score that both grounds and elevates the piece. No one today writes better music for the voice, to the extent that it all but deflects attention from its pitiless difficulty. The ghastly duet in which Gaveston reads the king's palm opens out into a larger ensemble before you know it, setting the stage for the opera's crushing denouement, when the king pleads with Gaveston to tell how he dies. The orchestration is so extraordinary and protean that, except at its noisiest and during the short interludes during which no one sings, you forget about it, as you do in a "Tristan" given its due.

While over the course of the opera his character becomes no more important than any other, out baritone Stephane Degout keeps the king a towering enough figure for there to be a tragedy, singing and acting over a dramatic range from whispered to stentorian. As Queen Isabel, Barbara Hannigan adds to the list of things she can do while also singing torturous music as if it were Gluck, smoking cigarettes with authority. She seizes on the bipolarity inherent in the role, showcasing its extremities, ultimately gaining our sympathy by having done nothing to coax it out of us.

Gyula Orendt leads with the menace crucial to the role of Gaveston, is genuinely sexy in a manner that trades in danger and slithers through music that ranges back and forth between the baritonal and the falsettist with cunning, slippery ease. Peter Hoare's Mortimer eschews easy bluster for building a character whose own evil precipitates a rise and fall in the end all too literally Oedipal.

The large, uniformly excellent auxiliary cast is a menagerie of individuals, and in the pit Benjamin is their clandestinely demonic ringmaster