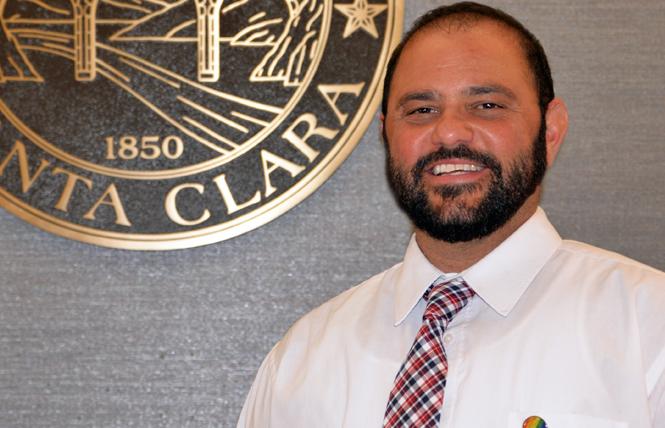 Anthony Ross is settling into his new job as transgender program manager for the Santa Clara Office of LGBTQ Affairs. Photo: Jo-Lynn Otto

It's a pioneering position to be in, and it appears that Anthony Ross has the right stuff to pave the path to build real change that will impact the South Bay's transgender community for years to come.

In early March, Ross stepped into his role as the first-ever countywide transgender program manager at the Santa Clara County Office of LGBTQ Affairs.

It was a tough decision, but after working with queer youth for 15 years at Outlet in Redwood City, it was time for a change, said Ross, a 45-year-old queer transgender man.

"I feel super lucky and blessed to have been doing work I love pretty much my whole career," said Ross. "I still like working with queer youth. I just love working with the community."

Love and support
The youngest of six children in a liberal Irish-Italian Catholic family in New York, Ross came out as a lesbian when he was 19 years old to a supportive family, he said. However, his journey coming out as a transgender man and transitioning when he was 38 years old was more complicated.

A similar fear surfaced when he realized he was transgender, but this time it was his community's response he feared. He was deeply involved in the lesbian community and working professionally in the gay community.

Realizing he was transgender and not just a very masculine lesbian happened in one night. Being transgender wasn't on his radar at all. It clicked after listening to a transgender panelist while in graduate school who echoed his experience of once being an ultra-tomboy lesbian and growing up going to Catholic school.

"I felt like he reflected my experience," said Ross, who was 29 at the time. "I got that guttural like, 'Oh my god, I'm trans,' and just could not process it at that point."

"I grew up lesbian, you know, like my community was female and I was just not interested in men. So, I wasn't interested in being a man," he continued. "I just put it away, like, I put it in the back of my head."

Ross struggled with depression and fear until he got the help he needed to transition in his late 30s.

Youth leader
His family's support inspired him to provide the same accepting space for queer youth throughout his personal struggle.

Ross earned his graduate degree in health education and started his career working as an alcohol and drug counselor with youth in New York before following his California dream to live in a "cool, gay beach town." At one of his brother's suggestions, he landed in Santa Cruz.

Soon after Ross arrived in the Bay Area he started working part-time at Outlet, an LGBTQ youth program of Adolescent Counseling Services on the Peninsula, in 2003. Eventually, he worked his way up to be the program director in 2008.

He loved his job. He didn't want to leave. However, to develop transgender programs for Santa Clara County was an opportunity he couldn't pass up.

"At this point it feels a little bit overwhelming just because there's so much to do," said Ross.

He recognizes that much has changed for the transgender community in recent years. Out trans celebrities Chaz Bono, Laverne Cox, and Caitlyn Jenner have boosted the community's visibility. However, there is still much work to be done, even in the progressive Bay Area, he said.

Ross likens the state of the transgender community to that of the gay and lesbian movement in the mid-to-late 20th century when community was everything to people.

"You needed your community to find your way," he said.

Currently, there are many people - transgender youth to seniors - who still don't know how to access the limited services available in the county. Services are limited due to the availability of well-trained providers such as counselors, social workers, teachers, medical providers, county employees, and anyone who encounters a gender nonconforming individual.

Geography adds another challenge due to the spread-out nature of the county that stretches north to south from Palo Alto to Gilroy and east to west from Milpitas to Los Gatos, he noted.

However, he believes the two biggest challenges are conservatives and complacency by progressives.

A conservative population in what is often considered a progressive area is pushing back on things like LGBT-inclusive sex education for school students in Fremont, which, while in Alameda County, is close to the Santa Clara County line.

The other challenge is complacency.

"We think we're super progressive and open, yet we have a really long way to go," said Ross, adding there is a general perception that everything is OK because many LGBTQ people are doing well and living openly in the Bay Area. "I want us to have a higher standard."

"Kids are being harassed in the bathroom. I have trans adults who are getting fired because they have to miss work for surgeries," said Ross. "That's happening here.

"We're still not where we should be if LGBTQ ... or people are still feeling kind of isolated, kind of misunderstood, not sure where to get services," he added. "That means we're missing something, right, as a community."

Solutions
To resolve these issues, Ross is taking his experience building programs at Outlet to the transgender community countywide.

County officials have already identified an LGBT youth shelter (http://www.ebar.com/news/news/260321) and transgender health clinic as priorities to stem homelessness and health care issues in the community.

Many of the programs being developed come from issues identified in the 2013 LGBT health survey conducted by the county, Ross noted.

His overall goal is to raise the visibility and awareness for the transgender and nonbinary communities, he said.

To reach that objective, his first task this year is to understand what the South Bay's transgender community needs, especially for people of color.

"While the trans community is highly marginalized across the board in seeking services and getting support ... trans and queer folks of color are the most discriminated against," he said. "Those are the folks that are having the hardest time. So, a lot of the priority for me is to build up as much support services for that group."

He's also working with the LGBTQ Affairs office and other agencies to bring the transgender conversation to criminal justice, domestic violence, and hate crimes issues, he said.

Once he has an understanding of the community's needs, he will prioritize them to begin to identify gaps in policies and enforcement of existing policies and develop programs based on the resources available, he said.

He is also tasked to work with the transgender health clinic expected to open later this year, and training county employees on cultural sensitivity for gender-nonconforming individuals.

"Anthony will work with that team to make sure that there is outreach into the community and visibility about that endeavor," said Maribel Martinez, director of the Office of LGBTQ Affairs. "A large part of the work that we do requires collaboration and relationships with community organizations and schools related to addressing transgender community needs."

To get the job done, Ross said he will be a regular at the office's 10-city listening tour, which has already held its first two meetings this year. He's also looking at working on a survey specifically for the county's transgender community.

"My vision is, really it has to do with building up a solid foundation of providers within the county and without and, especially, in the outlying areas," he said.

"We are hopeful this role will allow us to better reach a community that has been largely underserved and invisible for a large part as it relates to policy making," she said. "What we hope for in the future is that the transgender community will be not only informed of the process but would be engaged in the policymaking as well."

Fired up
Ross is very excited about the Office of LGBTQ Affairs joining forces with the county's Office of Cultural Competency, Office of Immigrant Relations, and Office of Women's Policy, all of which are under the Division of Equity and Social Justice.

He was also impressed by the support from county leaders and employees and is looking forward to learning from his colleagues and working on many issues, he said.

"Anthony is a great addition to our team," said Martinez. "Having somebody focusing on transgender issues and bringing that depth of knowledge to our office is a great benefit to the community."

She praised Ross' past accomplishments, particularly his ability to take a small office and grow it to fit the needs of the community, as an example of the "skill sets and traits that are going to make him a very successful staff in this role."

Ross is excited about his new position and working with his colleagues, community leaders, and the county's transgender community.

"I'm really fired up. There's so much good work happening," he said, talking about the expertise and resources everyone is bringing to the table. "There are so many people that are really just passionate. It feels really amazing to be a part of it because, again, I feel like it's such a privilege to be here right now in this position, in this office, [and] in this county. It's amazing."