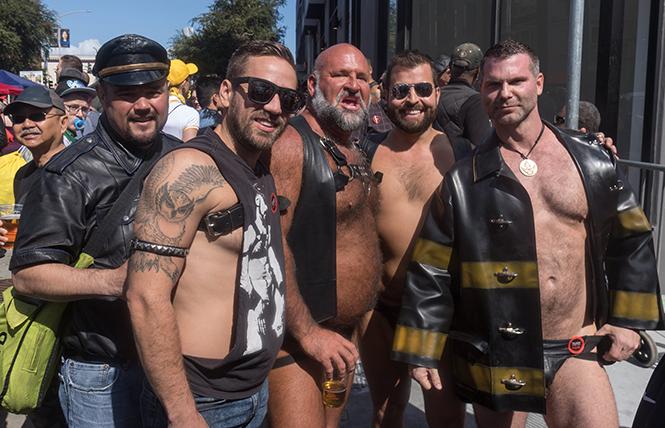 During the past Folsom Week, including at the Fair itself, I witnessed several kink social mores and practices that I would consider basic "kink etiquette."

The good news? Most people I witnessed were respectful of others' fetish garb, kink proclivities, space and sexual expressions. I didn't see a single serious violation of kink etiquette, at least not by my standards. But that's where it gets tricky. We don't all always agree on those standards.

Take something as simple as how we perceive and handle seeing a locked collar around someone's neck. We might all quickly agree on not touching a collar without asking. 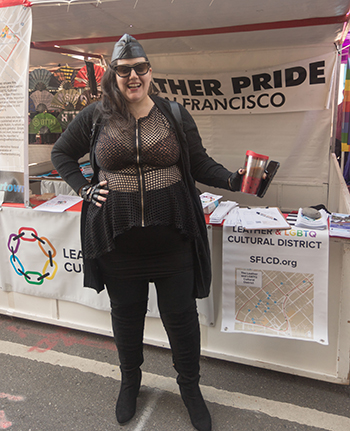 That's fundamentally basic in our scene and frankly applies to life generally. Don't touch someone unless you ask or get a clear cue that it's okay to do so.

However, not everyone shares the same overall view about collars. Some believe you don't speak to someone with a locked collar on their neck. Their contention is that you must ask their dominant for permission, to which I reply what happens when their dominant isn't around. Should we isolate that person from all conversation? Does the mere act of wearing a collar automatically preclude them from all human discourse?

What if that locked collar doesn't denote ownership at all but means something different to the wearer? With the proliferation of collars across the kink spectrum adapting to all sorts of meanings, that collar might represent something different than your perception, such as being part of a kink family. What about other types of collars such as pup collars so prevalent today? Do they foster the same standoffish policy?

These are the struggles that happen when we codify kink etiquette so specifically that it doesn't provide any wiggle room for the variations in life or acknowledging that everything in life changes over time, including symbols.

Me personally? I talk to anyone, assuming the person will tell me if there's some specific protocol around their collar. I never touch a collar because history and politeness teach me it's often a personal violation, but I never hesitate to talk to anyone collared.

The thing about kink etiquette is that I could lay out for you a bunch of rules and guidelines and you could try to adhere to them. Most would likely serve you well. But as you get deeper into what some consider appropriate behavior, opinions vary, and you're left with constantly wondering whether you should do or not do something.

For the neophyte, this can paralyze them into isolation, or prompt them to abandon their explorations in kink altogether.

Etiquette defines the requirements of behaviors according to societal conventions. It often includes proper conduct established by a community, officially or by organically evolved convention, for various occasions and everyday life.

Merriam-Webster defines etiquette as "the conduct or procedure required by good breeding [insert breeding joke here] or prescribed by authority to be observed in social or official life." 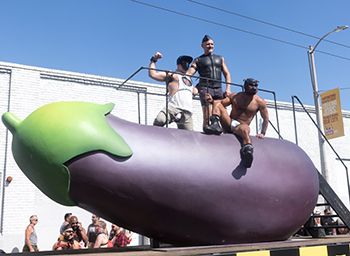 Who can resist a giant eggplant ride? photo: Rich Stadtmiller

I've also seen our scene explode into such a disparate collection of kinks, practices and identities that even someone as connected as myself has a difficult time keeping up with all the proprieties. Rubber fetishists, pups, Masters and slaves, sex pigs, and others have their own unique and evolving set of behaviors that are considered good etiquette.

So, here's my own solution to ensuring I attempt to approach and interact with others properly. I try to foster my own sense of empathy.

I consider empathy to be the most important characteristic and skill required of everyone in all kink communities. If one doesn't have empathy, I think their explorations in kink will forever be plagued by stepping into uncomfortable situations.

Empathy can be taught. It's not an entirely inborn thing. If you feel your empathy levels aren't suitable for social consumption, seek out ways to improve.

So, rather than me cite a list of dos and don'ts regarding kink etiquette, I'm going to encourage every kinkster to tap into their sense of empathy. If you need help with that, empathy can be learned and encouraged in social circles. That's really the ultimate solution to abiding by basic kink etiquette.

For Leather Events and previous columns, click to https://www.ebar.com/bartab/leather-kink