What about the sex? - Combining social and sexual scenes 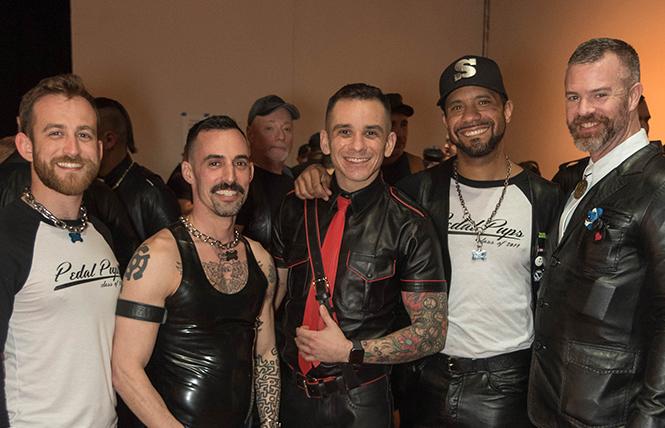 Attendees at the March 2019 Mr SF Leather contest prove that an event can be both cruisy and community-focused. Photo: Rich Stadtmiller

My visibility in the leather communities means people ask me questions, often daily, and sometimes from total strangers. They also offer unsolicited commentary on topics usually spawned by some social media churn.

We chatted a bit. He seemed nice, intelligent and genuinely interested in kinky sex and was highly experienced with much of it. He was not a newcomer.

After tossing around some ideas together, I convinced him to give the scene another shot, but the exchange made me think. After our chat, I had a lot of my own questions.

Why did this young man feel this way? Was he correct? Were his expectations misguided? Do we all see the 'scene' differently, and what do we mean specifically when we reference leather, or is it an amorphous term?

Yeah, I know. That's a lot of questions. I'm likely to not do full justice to any proposed answers, but this is a topic that emerges on a consistent basis.

After gathering my thoughts, I now know better what I would have said to him.

I pondered what I mean when I utter the phrase 'leather scene.' That seemed foundational to answering all those questions. Surprisingly, when I got honest with myself, I had a hard time defining it.

Is it about leather itself, the garb? Sometimes, but not always.

Is leather a shared culture? Yes, but that culture is remarkably diverse and fractured.

Ugh, this wasn't going well. After 47 years being deeply into this stuff, I couldn't pinpoint a definition for the scene I love so much. 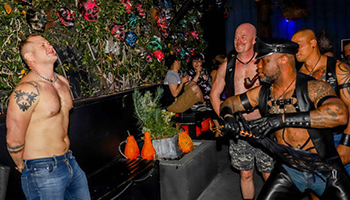 A flogging demo at the SF Eagle; sexy and sociability in synch? Photo: Rich Stadtmiller

The more I thought about it, the more it seemed that my questions were answered, at least partly, by the fact that I couldn't arrive at a satisfactory definition.

This made me realize that I, and I think others, need to become comfortable with the notion that when we say 'leather' we're describing something imperfectly. Words are always an approximation of what it is they're intending to describe.

With leather morphing and adapting to whatever someone in a certain ballpark of sexuality experiences, maybe the young man was seeing leather from but one perspective.

Many sectors of leather don't have much to do with sex. I've seen people from all walks of the leather scene who don't consider their involvement particularly sexual. Do I fully understand that? Admittedly, I do not. But to not face reality seems like folly.

I can point to a bevy of leatherfolk who have disconnected the sexual from leather. For them, it might be a community of people they've aligned with for other reasons, but the sex isn't 'the thing' for them.

What we could once have accurately pointed to as the leather scene is now somewhat indefinable.

Ultimately, what I would now say to that young man is that he's partly correct. For many, and likely the venues, events and people he initially tried to explore, sex isn't at the forefront. It might be a social network people navigate within because they share other commonalities beyond sex. Anyone who's spent any significant time within the leather world knows many who seem to not only eschew the sexual from their leather life, but oddly even denigrate it. Again, this isn't something I fully understand, but it is what it is.

I'd tell the young man that no one should bully him into accepting a scene that doesn't make him happy.

I'd tell him that while some in leather might not elevate sex to the highest priority, others do. He just needs to find them. They're there.

I'd tell the young man that leather is but a word. It will never fully describe anyone or anything. He should not feel compelled to blend into a scene that doesn't sync with his own sexual needs.

I'd tell the young man to possibly attend leather events, contests, bars and classes, but to use them as fishing grounds for sexual partners and friends who share his prioritization of sex over the other trappings of the scene.

If you feel like the sex has been pushed out of the leather scene, you're not alone. However, I'd urge you to not harp on the fact too much. Change happens. Leather changes. Everything changes. Seek out the sex you want and only embrace the leather scene to the extent it suits you. Just do what you do. Be who you are. Find those who share your sexual perspectives. And maybe, just maybe, some of those people are indeed within the leather scene.

For Leather events, go to https://www.ebar.com/bartab/leather-kink