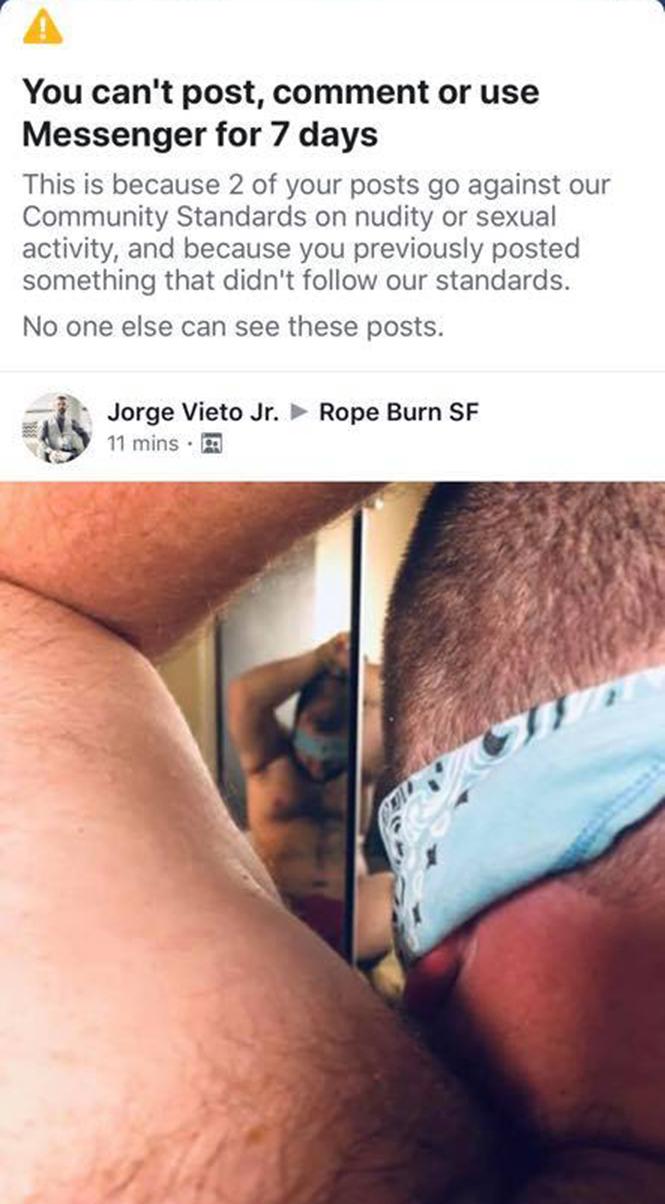 A well known kinkster, Jorge Vieto, had this image censored on Facebook.

Originally this column was going to be a standard pre-holiday shopping piece; where to buy kinky stuff, interesting sexuality books to give as gifts; that sort of thing. Then something happened that made me realize our leather, kink, and indeed all sexual cultures are under attack from sex-phobic forces and we need to start strategically figuring out how to best move forward.

A few months ago, I wrote here about the horrific SESTA/FOSTA legislation that came out of Congress and was signed into law. The legislation purported to target the problem of human sex trafficking by making websites, social media platforms and other online services liable for user content related to sex trafficking.

While this appeared to some to be a good thing, the collateral damage to all of us began immediately after its passage and has been getting worse.

I'm not going to go into specifics about SESTA/FOSTA and the damage it's done. Do an online search for it and you'll see mountains of articles about its wide-sweeping censorship effect. However, two high profile anti-sex impacts happened recently and they're sending shockwaves through every sex culture whether leather, kink, or other realms of sex. 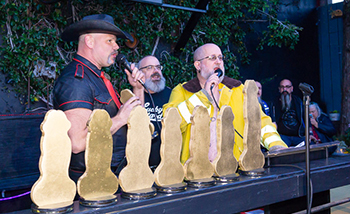 Could a local event like the Golden Dildeaux Awards be at risk of not being able to properly promote because of overly zealous anti-sex online standards? Photo: Daniel Samblanet

Close on the heels of Tumblr's announcement, Facebook appears to be following through on much tighter restrictions on sexual content. There have been reports of users having their posts removed for even mentioning sex. While interpretations vary, the revised standards seem to seek to squelch any mention of sex, even when such mentions are inherently benign.

These two high-profile events should serve as notice to any of us who navigate within LGBTQ, leather, kink, or any other culture in which sex is readily discussed that if it comes down to a company's profit or our sex lives, they will toss our sexualities onto a dung pile of repression in order to maintain their bottom line. This is a wake-up call.

In an era during which our physical gathering spaces are shrinking we have turned to online mechanisms to connect, organize and discuss our sexualities. We've tended to utilize the few big social media platforms, especially Facebook, to foster our leather and kink communities, promote events, and discuss topics of concern and interest. All that is now at serious risk.

I can't offer a plethora of solutions in this limited space but let me suggest a few ways we might blunt the online sex-negativity in order to help our culture survive.

Of course, the top priority is to get the SESTA/FOSTA law revised or struck down, but that's a long-range goal. In the meantime, we need to figure out how to ensure that our communities aren't ravaged by the law such that our cultures are severely hobbled.

While you're calling your people in Congress and contributing to organizations working to roll back the damage of SESA/FOSTA, there are other things you can also do.

As an overall suggestion to combat this censorship, I'm going to lean on the concept of decentralization. Decentralization is when the functions or powers of something are distributed more widely rather than concentrated in one or a few places. We need to start decentralizing our habits and platforms and by doing so we will hopefully avoid single point of failure scenarios.

We've become complacent. The ease with which we've been able to use the most popular of free online platforms has slowly had us abandoning other community-building approaches to which we need to return. 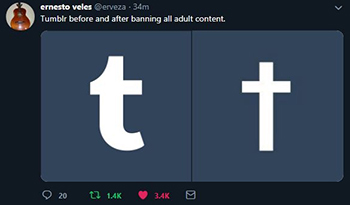 A song I've been singing for a while is to get up off the couch and go out. Go to a bar or sex club. Attend a class. Register for a conference. Volunteer with an organization. Shop at a brick and mortar business. Drag yourself to that party you've been meaning to go to but never quite do. Host a dinner. Organize a sex party. Right now, more than ever, we need to mingle and play face-to-face.

Being keyboard kinksters has a seductive allure to which we all fall prey. It's easy. It's low-bar community engagement. While that's better perhaps when there's an entirely free internet on which to do so, it's not the best of situations when the rug can be pulled out from under us at a company's or legislator's whim. Face-to-face needs to again be our default setting, not a nice afterthought.

If you're an organization, producer or venue, keep up your website. Too many have abandoned website upkeep, allowing Facebook to serve as essentially their sole online presence. Make sure event information, calendars and contact information are kept current. Always include direct links to every other online location you frequent. Twitter, FetLife and the newer MeWe are just some of the options.

I know that maintenance of websites can be a pain in the ass, but the effort is worth it. Also, remember that it's a lot easier to share, forward and put in print a memorable web address than it is a long or non-intuitive social media character string.

Offshore, non-U.S. locations for website servers might be one of the answers we need to embrace to ensure they remain intact and accessible. Some sites have already done this.

Along with your website, maintain a constantly cleaned and updated mailing list. Capture email addresses from as many people as you can so you can send out notices and perhaps regular newsletters keeping your constituency current and engaged in your real time activities.
Much of what I've just suggested means producers, clubs, organizations and venues need to prioritize having tech savvy people on their teams. There are a lot of techies around these days. It's a skillset we need. Let's make that a priority when forming boards, staff, and production teams.

Diversify your outreach. Perhaps we need to go back to using palm cards and posters more than we have been even though they are costlier than only using a digital presence. Maybe we need to start encouraging increased person-to-person outreach and communications in parallel with anything we do online.

I wish I had all the answers to this dilemma in which we now find ourselves, but we must start addressing it now because there are forces at work that would like nothing more than to squelch anything sexual from public discourse let alone anything LGBTQ, kinky or edgy.

We can do this. I know it won't be easy, but I don't think we have a choice. Let's start now. Give yourself a gift this holiday seasons. Give yourself the gift of fostering your and other people's sexual freedoms. It's the gift that keeps on giving.