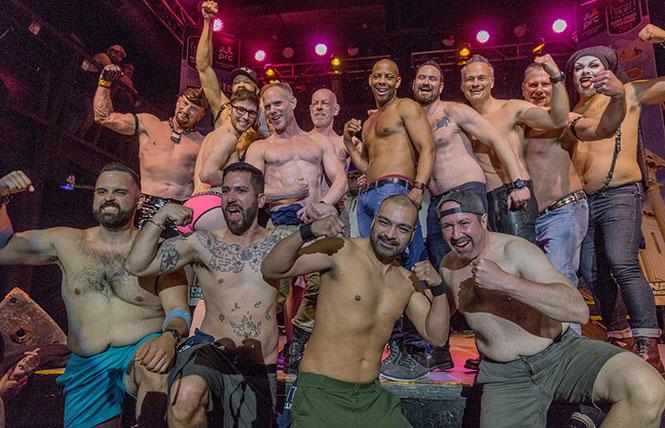 These are the hot men who were chosen to be included in the 2019 Bare Chest Calendar. photo: Rich Stadtmiller

As I'm writing this I'm getting ready to go to Chicago for the International Mr. Leather weekend, often referred to as IML. Perhaps I'll report on IML happenings in my next column. But as I prepare to attend what is the biggest men's leather and kink event of its kind in the world, I'm reflecting on some of the events I've been attending this past week here locally in San Francisco. I am once again reminded the kinky gods have blessed us with so much here.

Bare Chest Calendar Finals
Hot men. Bare chests. And a good cause. What's not to like? On Saturday, May 19, at the DNA Lounge, the men who will grace the pages of the 2019 Bare Chest Calendar were chosen. This will be the 35th edition of the calendar.

Proceeds from the sales of the calendar go to the nonprofit PRC (Positive Resource Center).

I watched co-hosts Mr. Pam and Brian Kent deftly oversee 16 guys vying for inclusion on the calendar and having witnessed the competition I'm glad I wasn't a judge having to choose the final men. But, choose they had to do and 14 men ended up on the next calendar.

This was a record-breaking season for the calendar with the entrants raising a total of $109,482.

Judges for the finals this year were Ed Mathews, Will Swagger, Ranj Singh, Manny Ojeda, and Hunter Fox.

The 2019 calendar men are Larry Rich (January), Mark Whitfield (February), AJ Huff (March), Misster Phyliss (April), Mark Troy and Tim Valdivia (May, shared), TJ aka Wolfmaster (June), Russ Bono (July), Marc Baumann (August), Orlando Baez (September), Marco Rodriguez (October), Andy Hirst (November), Joe Pessa (December), and Max Killen (Lucky 13).
One of the great things I noticed about this year's crop of contestants was the diversity. They spanned a broad age spectrum from quite young to one contestant who is 62. People of color were well represented and there was even a Sister of Perpetual Indulgence competing in face. It's great to see the reality of our diversity better reflected in our long-standing institutions like the Bare Chest Calendar. www.barechest.org 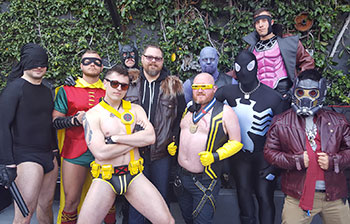 Some of the superhero fetish guys at the recent Mask4Mask party held at the SF Eagle. Photo Credit: Race Bannon

Superhero fetishes are a thing
Anyone who's paying attention to the kink scene lately knows that superhero fetishes have moved to the forefront of popular kinks for lots of people. To celebrate this fetish, Stephan Ferris and Amp Somers hosted a Mask4Mask superheroes cosplay party at the SF Eagle on Saturday, May 19.

People were encouraged to dress as their favorite hero to get sketched by a comic artist or enjoy live cosplay fetish and drag performances.
A few years ago, I was at Mid-Atlantic Leather in Washington, DC and I witnessed a massive superhero fetish meetup in the lobby of the event's host hotel. I was blown away by the size of the attendance and the variety of ways guys dressed. It was at that point I realized the superhero and cosplay fetish had risen to more mainstream status and that trend seems to be continuing. 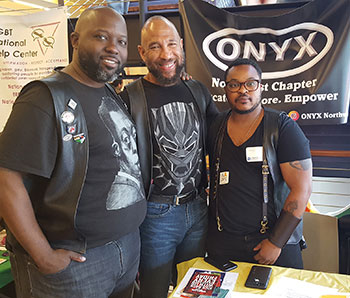 AtmosQueer
Strut, located in the Castro and operated by the San Francisco AIDS Foundation, works to foster health and wellness for gay, bi and trans men. Strut offers its clients the tools and support to manage physical, emotional and social aspects of their unique health needs.

Aligning with their mission to encourage community building, on Sunday, May 20, Strut hosted their sixth annual AtmosQueer, an LGBT community connection fair to help people make finding networks of friends easier. The goal of the event is to offer community members an opportunity to discover a new activity, make new friends, and have a lot of fun.

It was nice to see one of our community's most high-profile nonprofits once again include leather and kink groups among the many other LGBT options we have in this great city of ours. www.strutsf.org 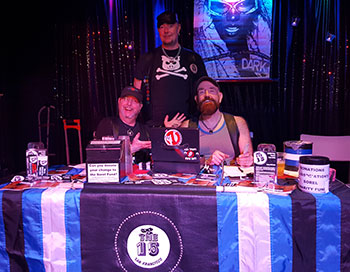 (Left to right): Drew Ward, Eric See, and Dennis Chase of The 15 Association at their beer bust at the SF Eagle. Photo Credit: Race Bannon

The money raised is put to good use. For example, no one is ever turned away from one of their play parties or events for lack of funds. They also have a fund to help those facing serious financial hardship.

Folsom Street Events heats up its season
Most people know about the nonprofit Folsom Street Events as the producer of the annual Up Your Alley and Folsom Street Fair street fairs, but they also host various events throughout the year that adds to the overall amount of money they can ultimately distribute to the many nonprofits they assist.

On Sunday, May 20, they hosted a beer bust at the Lone Star Saloon. This was a great opportunity for people to become yet more aware of Folsom Street Events and the great work they do. 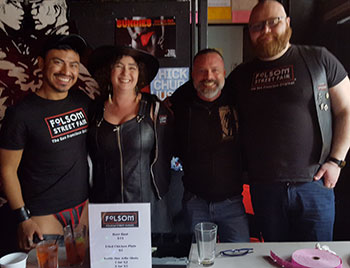 Remember, Up Your Alley isn't far away. It's one of my favorite annual events. It takes place on Sunday, July 29, 2018 centered around the intersection of Dore Alley and Folsom Street in the South of Market area of San Francisco. www.folsomstreetevents.org

Leather and LGBTQ Cultural District
On May 9, 2018, it became official! The acting Mayor of San Francisco, Mark Farrell, signed the Resolution that was passed unanimously by the Board of Supervisors to create the Leather and LGBT Cultural District, the fifth cultural district to be formally created in San Francisco. The District is in the city's South of Market area.

It's believed this is the first time a city has acknowledged through legislation that the leather community indeed has a culture worth preserving and fostering. While San Francisco has a long history of embracing the LGBTQ community, the legislation puts the weight of the city and potential financial resources behind a community that's often been the bastard child of otherwise accepted cultures.

Even though the District is now a reality, the work has just begun. At monthly community meetings that are open to all the core organizing body of leather and LGBTQ folks have been drafting the Resolution itself, and are now creating membership guidelines, bylaws and operating procedures that the District will use in the coming years.

If you'd like to find out more about the District and perhaps get involved in its operation, check out their website. www.sfleatherdistrict.org