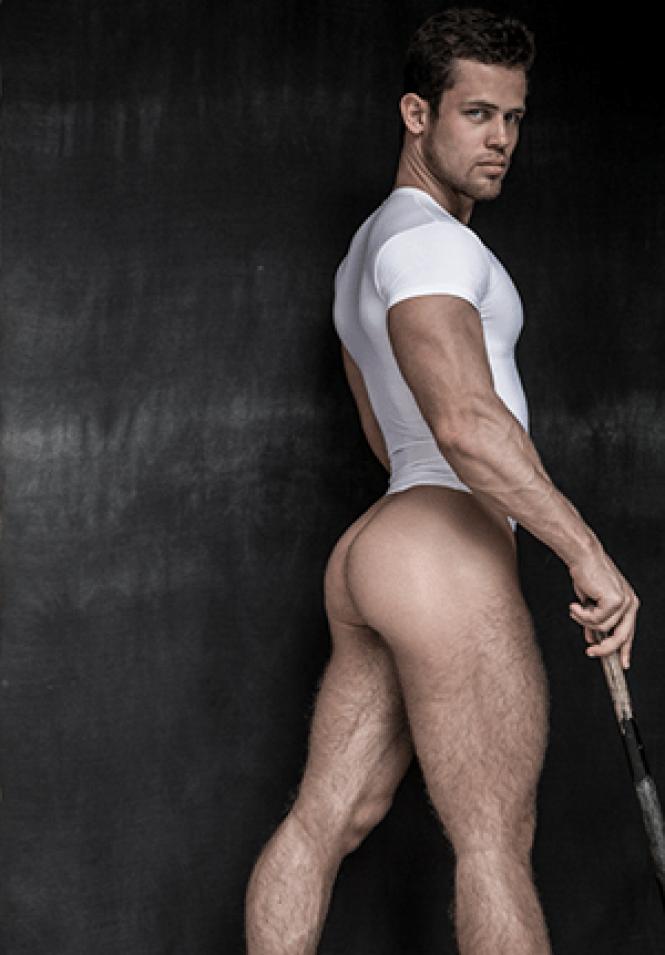 Wolfe, 26, shared his thoughts, experiences and opinions on a diverse array of subjects, proving he's got both brains and brawn.

BARtab: In a 2015 interview, you discussed the fallout of the Rentboy shut down. A year later, has your escort work returned to normal, with your Rentmen listing?

Kurtis Wolfe: Prior to the RentBoy shut down I was advertising very heavily on both RentBoy and RentMen. When the horrendous seizure of the RentBoy site happened, my advertising was still online and viewable for everyone. Based upon my experience, the industry adapted very quickly in shifting their strategies for advertising and continuing operations as normal. Many escorts like myself saw no fluctuation in business and others were unable to adapt in order to continue doing business. Like in any business, one needs to continually evaluate your environment and your business to make any necessary changes to improve.

You also have other businesses. Any details on those, like Buck Wild Studios?

I manage and own several businesses, one being Buck Wild Studios, which is a sub-division of my advertising and media company Enflame Media. Buck Wild Studios started as a management company for webcam models in the industry. We helped new models get quickly started in the industry by filling out the necessary paperwork, negotiating higher earnings rates and even providing equipment for models to utilize so they could deliver high quality content while performing.

Buck Wild Studios has been undergoing a lengthy restructuring to expand our focus past webcam models and focus on studios, recruiters and all models in the adult industry simplifying and streamlining processes so everyone can focus more on producing great content and less on the paperwork. Eventually, I envision Buck Wild Studios expanding further into content creation and beyond the adult industry.

How is life in Austin? You've said you love it, but what about that city is special?

Life in Austin is absolutely amazing when I'm actually there! I travel so much that it often feels like I don't actually live in the Lone Star State. However, when I am back in Austin, I am very happy to call it home. The attitude and overall environment of Austin is very laid back and relaxing while maintaining a very serious attitude when it comes to business. Austinites know how to balance work and play. But most of all, everyone that has moved to Austin in the last decade has had one sole purpose; creating a better life for themselves. It really shows amongst those people who have decided to embrace our very unique culture of food, music, traditions and lifestyle.

SXSW (South by SouthWest Music Festival) is a popular event in Austin. Have you ever attend events at the festival?

Just this last month I attended the SXSW Music festival with my boyfriend, and we both absolutely loved the weeklong festival. Even though the unique vibe of Austin is thrown off by its population essentially doubling for the week, it is a great experience to check out your favorite bands that may performing as well as check out some new and upcoming artists in the scene. My music tastes tend to vary depending on the day, but I stay focused on the Rock, Alternative, Pop, Country and Jazz genres. Basically anything other than Hip-Hop music. One of my favorite country artists is Jerrod Niemann and one of my favorite rock bands is Five Finger Death Punch.

You've done a lot with RandyBlue. Are you still with them? Are there other studios you'd like to work with?

I am no longer with RandyBlue in terms of filming new scenes since January 2015. Many of the studios have scaled back production to a point where exclusive contracts no longer are feasible. Unfortunately, RandyBlue only wanted to continue at the time with exclusive contracts, so we decided to part ways. I still work with RandyBlue extensively in regards to their Live Webcams by managing models for them through Buck Wild Studios, as well as logging on every once in a while to do a webcam show myself. I would absolutely love to work with several of the studios such as Falcon, TitanMen, Colt and CockyBoys. Any of the studios that would love to cast me are more than welcome to contact me with a reasonable proposal for a scene.

My first duo scene in the industry was with Derek Atlas and was filmed the day after I had filmed my solo scene with RandyBlue. I started out in the industry as a live webcam model while I was in graduate school. At the time I needed a job that was flexible to help pay for the rent, groceries, etc. After several months, a recruiter for several of the studios saw me and referred me over to RandyBlue.

Can you name a few favorite guys you've performed with?

Some of my favorite guys I have performed with on camera have been Austin Wolf, Tyler Wolf, Derek Atlas and Jimmy Fanz.

Are there any guys you'd like to, but haven't yet worked with?

Johnny V, Bruce Beckham, Micah Brandt and Bravo Delta are just a few of the many men that I would love to work with on stage or in front of the camera.

You've obviously become versatile, sexually. One of your scenes, with Austin Wolf, stands out. It had that 'top-only actors finally flip/bottom' appeal. Those kinds of scenes with other performers often get promoted as a sort of special scene. Do you think the days of 'top-only' actors are going away?

Honestly I started out in the industry as a sole-top because that is how I was in my personal life. As I became more comfortable with being versatile, I was open to the idea of filming versatile scenes with Randy Blue. Consumers in today's market will expect versatile performers. Many studios will only hire new models as tops only as a potential marketing gimmick until they feel it is time to debut their other skills on camera.

I have been asked countless times if I wrestled in high school or college and the simple answer is no. Throughout high school I played baseball and in college I was more focused on weightlifting. I receive many compliments about my ears as well as my freckles. During my childhood I was consistently teased when it came to my ears and absolutely hated them while growing up. Over time I have learned to embrace their "adorable" characteristics. The minor differences in ourselves is what makes us unique and special. No one honestly wants to be normal anyway.

Have you performed with Draven Torres before?

Draven Torres is an absolutely amazing performer and I have unfortunately have not had the chance to perform with him, on or off camera. I have previously worked with him in other capacities such as one of the recent photoshoots at Fort Troff. I am absolutely excited to work with him at Nob Hill Theatre and put on an amazing show for everyone to enjoy.

Have you done other live sex shows? If so, where?

I have previously done shows at Nob Hill Theatre and some various other events such as the Black Party in NYC.

Do you also do more R-rated gogo dancing or stripping?

I have previously done more R-rated gogo dancing and stripping but only on very rare occasion. I try to focus a lot of my resources on what will be more beneficial for myself as well as my fans.

Have you had relationships off-screen or offstage with other guys, or with women? Is that difficult to maintain?

While in the industry I've had a previous relationship and I am also currently in a relationship with another man. As long as your partner is understanding of the industry and what happens, your line of work won't be the cause of any issues. Right now I'm currently doing a long distance relationship and while that has been difficult, we have been making it work by planning several trips to see one another either in our home cities or traveling to somewhere new. Life is an adventure and we're both making sure it's a fun, exciting, interesting and overall thrilling ride in itself.

However, as we all know, Truvada does not protect against the other STIs that are increasingly becoming more and more drug-resistant. Playing safe, frequent testing and being mindful and understanding how specific STIs/STDs are transmitted are very important and will play a vital role in reducing transmission and creating a safe working environment.

Free content is great for a lot of reasons including marketing for studios, products and even the performers themselves. However, illegally distributed content is severely hurting the industry and it does affect the income of everyone involved in making the content including the studio, directors, staff as well as the models.

As with my previous performances at Nob Hill Theatre, the audience members won't find just the normal run of the mill shows, but something that'll keep you hooked and begging for more. Draven and myself love delivering an exceptional performance and we plan on bringing that same level of dedication to our shows this weekend.