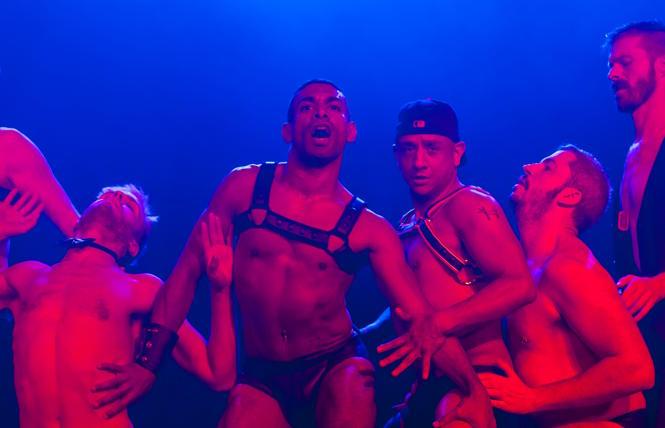 When the pandemic hit, the company cancelled shows, but pivoted with hilariously sexy stripper 'Suds & Studs' car washes outside the SoMa nightclub. They also made a few videos, online shows, and a documentary film.

But performing for a live audience makes for much more interactive fun.

"It's going to be so wonderful to be onstage again, but the backstage is our favorite part," said co-creator, MC and performer Michael Phillis. "There's nothing like the camaraderie with a side of ball sweat that you get in a Baloney dressing room."

Choreographer and Baloney co-creator Rory Davis, who's been making dances for drag performers in the Bay Area for years, and is Phillis' hubby, also led online dance classes through lockdown and before.

Asked which numbers will return and what new routines audiences can expect, Davis replied, "We've got returning classics like our Nine Inch Nails number," (a Folsom favorite with men in harnesses, jocks, boots and, by the finale, not much else).

Film fans may know that the new documentary about Baloney, directed by Joshua Guerci, recently made the LGBT film festival circuit, to audience and critical raves (see the trailer below), and read our 2015 coverage of Baloney's debut.

Now that Baloney's even more famous, is another tour in the works?

Said Phillis, "There's no tour in the works just yet, but we're happy to be back at our home venue Oasis for our new show; also for New Year's Eve, and a full slate of shows in 2022."