Lillias White: 'Happy' to be here 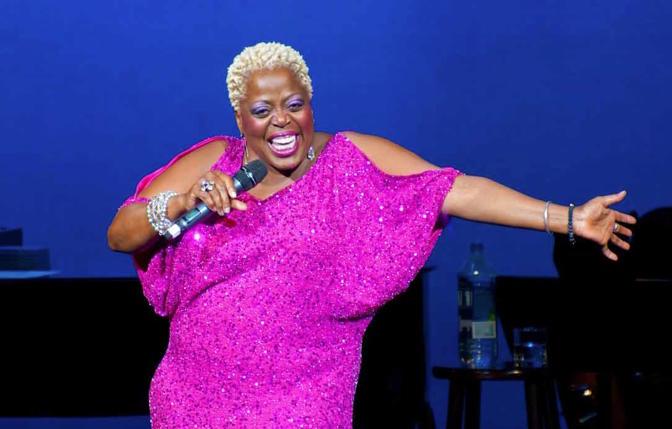 There will be much to celebrate with Broadway star Lillias White when she makes her Feinstein's at the Nikko debut in a two-night engagement beginning Friday, July 23. The very same day will see the release of White's new album, Get Yourself Some Happy!

Happy is, in fact, White's very first solo studio album. This may surprise audiences, considering that the vocally powerful Tony winner (for Cy Coleman's 1997 musical, The Life) has thrilled audiences in two of Broadway's signature musical moments; as Effie White in Dreamgirls (1987 revival) and in a six-month-run as Grizabella in Cats.

Her cabaret performances have been praised by The New York Times as exuding "intelligence and self-assured sophistication." And yet another reason the album comes as a surprise —and another reason to celebrate— is that this newbie recording artist will turn 70 just two days before taking the stage at the Nikko.

"I've always wanted to be a recording artist," White told the Bay Area Reporter in a recent phone interview, during which she was being driven from her New York home to a recording studio, where she's been making up for lost time. "I'm recording tracks for my next album," she says with a laugh. "It's a tribute to Sarah Vaughn called Divine Sass. I've done many of the songs in concerts over the years."

What took so long?

And she's not kidding. Since 1981, when she played her first Broadway role in Barnum, White has been in the cast of 11 different musicals on the Great White Way, including Once on This Island, How To Succeed in Business..., Chicago, and Fela!, for which she received a second Tony nomination playing the legendary Nigerian musician's mother (White was also a standby for 1988's infamous Carrie: The Musical). White also did an Emmy-winning turn on Sesame Street, played the title role in a Los Angeles stage production of Ma Rainey's Black Bottom, and more recently appeared on Netflix's The Get Down and Russian Doll.

Somewhere in there, "back in the day," White briefly lived in San Francisco. "I married a man from there," she says of a period she'd rather not revisit. "I don't know why I did that."

Still, White, who lived at Gough and Washington, has fond memories of the city itself and has returned for concert performances at The Venetian Room and the Orinda Theater's cabaret series.

At Feinstein's, she'll be performing many of the songs that she and her longtime musical director, the late Timothy Graphenreed, selected for the new album. While all of the tunes share a theme of happiness, White gamely zips between styles, demonstrating her range from a hushed rendition of "You're My Best Friend" to an amped up, danceable "You've Made Me So Very Happy."

Her take on the Turtles' "Happy Together" finds blue notes lurking in the joy. Her surprising inclusion of "The Twist" is because, "It reminds me of a happy time in my childhood, gathering at my grandmother's house in Brooklyn and watching TV to learn all the new dances like the Twist and the Monkey and the Boogaloo."

Today, White continues to take on new challenges. In addition to recording her albums, she regularly works with a vocal coach to keep her richly seasoned voice strong and, in recent years, has been involved in the development process for Half Time (formerly titled Gotta Dance), a new musical from director Jerry Mitchell based on the true story of a senior citizens' hip-hop dance troupe.

As to whether there are any music theater roles she'd still like to get a crack at, White says, "I want to do new work, with new music and fresh voices."

But after a pause, the ever-effervescent 69-year-old reconsiders: "I would love to do Mame."

Lillias White at Feinstein's at the Nikko, July 23 and 24. 222 Mason St. $75 www.feinsteinssf.com
https://www.lilliaswhite.com/