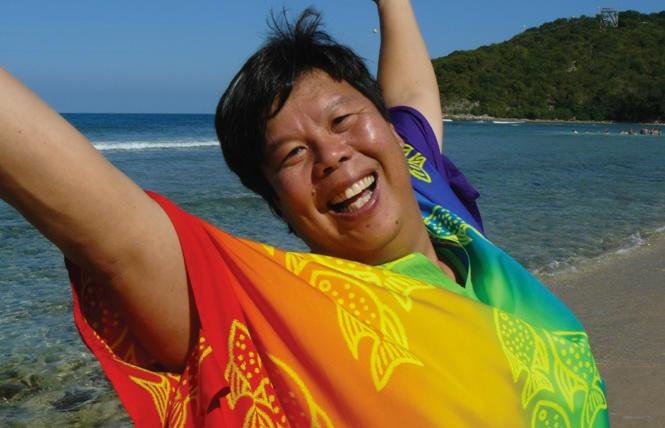 Most years at around this time, gay men flock to Matt Yee's campy, comedic singalong concerts aboard vacation mega-ships like Royal Carribean's Oasis of the Seas. But this year, with the cruise industry still semi-landlocked in the pandemic's wake, San Franciscans can catch him at Oasis of the Urine-Soaked Sidewalks.

The Oahu-based party starter who has, in aggregate, spent about ten of his past 20 years performing aboard cruise ships, brings an updated dry dock extravaganza to town for two shows this Friday and Saturday night.

"I'm excited and apprehensive at the same time," Yee says about cruise companies' slow float back to normal. "My bookings are very touch and go."

In fact, during the week between his initial interview with the Bay Area Reporter and Yee's San Francisco shows, he was anxiously awaiting a call from gay cruise operator Atlantis Events which —after a stuttering series of trip postponements and cancellations while conditions and regulations evolved worldwide— is finally returning to sea with a Greek island itinerary on August 15.

When that call finally came last weekend, Yee learned that, given the revenue constraints created by ships' COVID-driven reduced passenger capacity, Atlantis was unable to fly him from Hawaii to Greece for the gig.

"My last cruise was a round-trip from New York to the Bahamas at the beginning of last March," says Yee, whose theater fandom rivals his hamdom. "After we docked, I hurried to Broadway to see Moulin Rouge and catch Patti Lupone in Company. And then the next day it was all over. I flew home to Hawaii."

"I'm very lucky," says Yee of the nest egg that allowed him and husband Paul to weather a year of drastically reduced income. But he expresses serious concern for fellow members of not one but two major industries that he's a part of: the entertainment business and the hospitality business.

"At least those of us who are performers could turn to the internet," he says, noting that in the early months of travel restrictions he performed online every weekend. "In March, we were having 13,000 to 15,000 people tune in."

That's one of the benefits Yee sees in having built an audience for his act on cruise ships all over the world. Another, he points out, is that when performing at sea, he has time to form stronger connections and real friendships with fans.

"It's thanks to a guy from Baltimore named Joey Watson who I first met on a cruise that I was able to do these pandemic livestreams. He's an internet genius and he was able to set things up so that people could tune in from whatever platform they were most comfortable, so it wasn't just limited to Facebook or Instagram or Zoom." 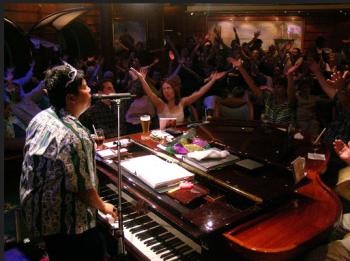 "Matt is crazy addictive," says Marcus Dawson, a local fan who lives in Clarenden Heights. "I've seen him at least a dozen times; on cruises for the past seven years or so, and then I've gone to see club shows here and in New York and in Miami. I kidnap my friends who haven't seen him and take them to shows when Matt's at a club. For someone like me who loves to sing but isn't going to win a Grammy anytime soon, Matt makes it easy to shake of your self-consciousness."

Yee brought his trademark muumuus, wigs, props and double-entendres to his online shows. But the energy at first is distinctly different.

"I basically sat at an electric keyboard here in my house and yelled at my computer," said Yee. "Because I was on all the platforms and there's digital delay, I couldn't see any audience and the only feedback I got was in comments. But, to be honest, it gave me a sense of purpose. I didn't have that existential dilemma that you can have as a non-performing performer, like 'What am I here for?' In the first few shows, I went on for hours. Eventually I pared it down to 60 minutes, but unlike on a cruise where people see me perform one or two times, people came back week after week, which meant I had to develop some new material."

In fact, the internet's content-gobbling hunger will prove a boon for longtime Yee fans who catch his shows at Oasis. As he readily acknowledges, Yee's shows have long been heavily loaded with evergreen schtick that he can perform repeatedly since his shows provide a familiar vacation ritual for many fans.

"I have my repertoire and it works," he concedes. But time in drydock has inspired some new numbers that Yee looks forward to sharing.

"Paul and I watched that new HBO Tina Turner documentary, and just watching her come on stage at Wembley Stadium —'All the men come in these plaaaces...'— it was fantastic. And I'd never done 'Private Dancer' before, so now that's in."

The pandemic also generated some unexpected requests. "This couple reached out to me online to ask if I would do a videogram of 'W.A.P.'—for their daughter's bat mitzvah!"

The stalwart cruiser responded with a hearty 'Whatever floats your boat' and fulfilled the request.

Yee also plans to put a medley from the musical Dear Evan Hansen, Lizzo's "Good as Hell," and the Al Green/Annie Lennox hit "Put A Little Love In Your Heart" into heavy onstage rotation.

"These songs just fit the overall theme of my shows, which is people getting together and feeling uninhibited enough to do silly things together. It doesn't matter who you are or what you look like, just come together and have fun. And sing! I don't care if you don't know how to sing. Sing louder!"

Francis Jue and Rotimi Agbabiaka in SFMT's 'Tales of the Resistance'

Francis Jue, who grew up in the Richmond, has starred in M. Butterfly on Broadway, guest-starred on The Good Wife and Law & Order: SVU, and recently trod the Bay Area boards in David Henry Hwang's Soft Power and Lauren Yee's King of the Yees.

Rotimi Agagbiaka recently released a film of his solo show Manifesto and starred in We Players' site-specific romp through McClaren Park, Psychopomp.

In the July 11 episode of the SFMT's Tales of the Resistance, the pair stars in "Jailbreak!" by Michael Gene Sullivan, in which an Antifa activist and a black drag queen are thrown into a jail that also houses the leader of a rightwing insurrectionist group. Mayhem, with music! ensues.

New episodes of Tales of the Resistance are being released weekly through July and are available to stream free of charge at www.sfmt.org 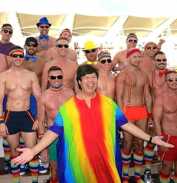