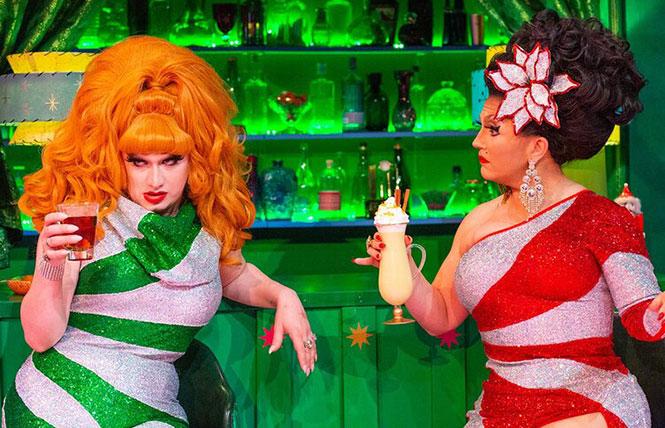 Drag performers BenDeLaCreme and Jinkx Monsoon, both RuPaul's Drag Race alumni, aren't letting the pandemic spoil their holiday. The duo, who have become known as the Queens of Christmas due to their popular and acclaimed holiday tours, are recreating the golden age of television, a time when TV specials were a staple of the small screen.

Since doing a live show is out of the question this year, these best girlfriends are offering The Jinkx and DeLa Holiday Special, a 60-minute musical extravaganza which will be available via Video On Demand during the holiday season.

This marks the first time BenDeLaCreme has directed, co-written and executive-produced a film project under the auspices of BenDeLaCreme Presents, her own production company. DeLa wants people to know that the film was made safely on a Seattle soundstage, and that CDC guidelines were strictly adhered to.

Despite the pandemic, it's been a busy year for Monsoon and DeLa. In addition to their holiday special, the pair recently appeared as drag queens in Happiest Season, a lesbian holiday romantic comedy now streaming at Hulu. 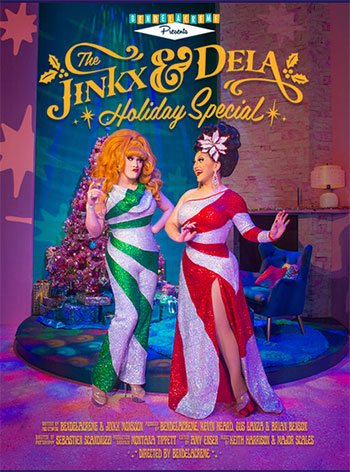 The Jinkx and DeLa Holiday Special is the story of two drag queens who can't seem to agree how to create a Christmas TV show. With the help of a chorus of dancers, and also with the help of DeLa's dead grandma (whose spirit lives on in a glass of eggnog), DeLa tries to uphold the Christmas traditions of her youth. Monsoon, on the other hand, is far more interested in naughty jokes and booze.

The show is chock full of musical numbers about everything from Santa Claus to the baby Jesus, and it all leads up to a battle for control of the show. The pair eventually learns, with the help of a mysterious naked man who harbors a holiday secret, that tradition is whatever we make of it, and family is whomever we choose.

Trying times, glamour and humor
In a joint telephone interview, DeLa and Monsoon spoke to the Bay Area Reporter about the pandemic, and about their holiday special.

"I would say that I'm doing the best I possibly can, considering that I'm in the middle of an apocalypse," said Monsoon. "And so is the whole world. It's been one of those things where life is difficult, the situation is not ideal, but I am just so grateful for the friends that I have, the loved ones who support me, my fan base that has been so loyal throughout this tumultuous time, and the resources that I have to keep myself viable as an artist."

"It's obviously a very trying time," added DeLa. "The only way to get through it is to keep looking at those silver linings. I feel very fortunate that as drag queens we've been sort of conditioned. It's in our blood to be able to adapt to adverse circumstances. Not just in survival mode, but to also bring some glamour and humor into it. We've been doing our best in that regard, and it's nice to know that you can get through something like the year 2020."

Monsoon addressed how things were kept safe during the special's shooting.

According to Monsoon, Meredith walked through the set constantly with hand sanitizer, each day reminding everyone of the protocols and guidelines they had to follow.

DeLa admits that initially they were disappointed that they couldn't do their usual stage show. It wasn't the only professional loss they endured as a result of the pandemic. This past spring, a show they were about to do with Peaches Christ at the Castro Theater was cancelled due to the shelter-in-place order that was issued by Mayor London Breed at that time.

"Fortunately, the holidays are such an important part of Jinkx and my performance calendar, so there was enough of a heads-up to think about what we wanted to do about it," DeLa said. "We made a pretty quick pivot in June and decided that we're going to figure out how to produce a full film and make something that is not just a recorded stage experience, but is actually meant to be experienced as a movie. It was a lot of hard work, but I do think that it was rewarding and exciting and it kept our minds on something creative where we could feel good about the message that we're sharing with the world." 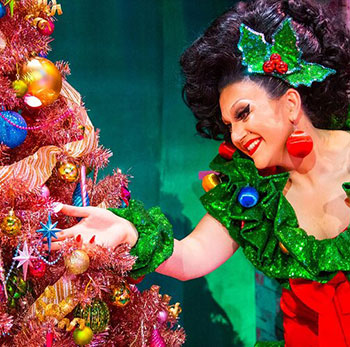 TV time
DeLa noted that the TV special was inspired by their live stage shows. They took a lot of the bits they've done over the years and poured it into what she calls "a film that is a film about putting on a TV special."

"We are also paying homage to those classic Christmas TV specials," said DeLa. "Everything from The Judy Garland Christmas Special, all the way through to the Pee Wee's Playhouse Christmas Special; all those tropes where an individual sort of invites you into their home, which is clearly a soundstage, and addresses the camera. This is a tried and true holiday tradition, so in our film Jinkx and DeLa attempt to do this together. DeLa is very much the one who is chipper and upbeat to a fault and wants to uphold all the wonderful Christmas traditions that she sees as so important and nostalgic."

But DeLA doesn't want to look at the aspects of Christmas that can be a little troublesome or traumatic. Whereas Monsoon's character would rather put on a show where she's drinking, and "manizing."

"The two have very different ideas about how to put on this show," DeLa said. "It turns into a real story about the two of them trying to make peace with both their own and each other's holiday path."

The story is told through comedy, dance, song and puppetry. DeLa pointed out that most LGBTQ people don't have the experience that the Hallmark Channel says they're supposed to have every year.

"So I think that the message of this story is that what we have is each other," she said. "And what we have is the common experience of trauma, and that can be made into something beautiful and new if we come together and decide that we're going to make something that works for all of us." 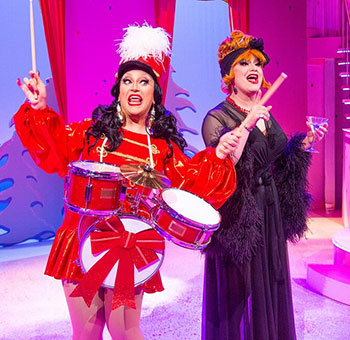 Monsoon noted that the pair's stage shows usually feature just the two of them, but for this film they wrote in a third character, played by Seattle-based actor Jordan Iosua Taylor, who plays the naked man. The film also includes a chorus of dancers and a band. Most amusingly, the film features a talking eggnog, which is voiced by drag star Varla Jean Merman.

Monsoon spoke of the long professional relationship she and DeLa have enjoyed.

"We have such mutual respect for who the other one is as an artist and as a drag entertainer," Monsoon said. "We share a lot of the same mission statements and a lot of the same goals as performers and artists. The friendship formed out of working together and the work has been informed by the continuing friendship."

Monsoon has a message for anyone who might be hesitant to watch a holiday drag show.

"Forget about everything you've heard about what a drag show is," she said. "While our show definitely delivers a lot of what you'd expect of two drag queens tackling the holidays, we also tackle a lot of subjects that you wouldn't expect cartoony characters to take on. We have a lot of fun, we strive to be entertaining, we strive to be funny, but we also have a really earnest message at the core of our film. We really work hard on making sure that every gag, every pun, every joke has a purpose and a meaning beyond making you laugh. So prepare to be entertained and prepare to leave the film with some new ideas and new outlooks you might not have expected from two drag entertainers." 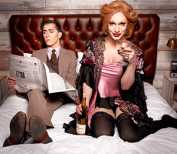 Out in the Bay: How to enjoy stay-at-home holidays
Sign up!