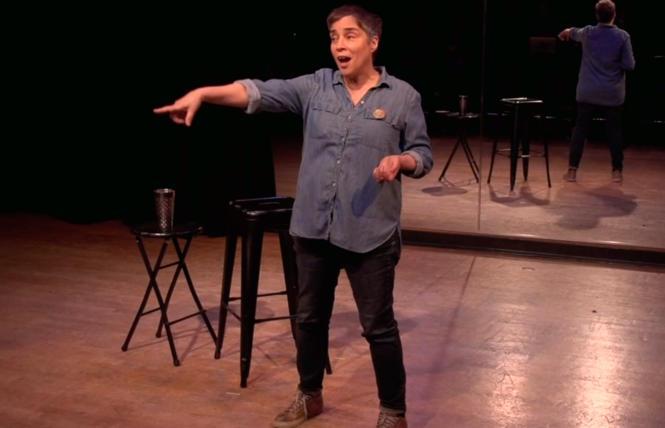 In her live-streaming queer Cuban comedy-drama Spanking Machine, Marga Gomez shares the story of the first boy she ever kissed and how it made them both gay forever.

Shifting across gender, latitudes and generations, her new show, presented by Brava, is funny and a bit disturbing.
Gomez recounts growing up brown and queer in New York, and tells tales of sadistic nuns on poppers, tender vampires, childhood misdemeanors, sexual assault and suppressed memory.

Development on Spanking Machine began in March 2019 when it was chosen for residency at Syracuse Stage's Cold Read Festival and continued through 2019 and 2020 with workshops at Elgin Illinois Fringe Festival, and a three-night, sold-out, work-in-progress run at Dixon Place in New York City. In July 2020 Dixon Place commissioned Gomez for a two-week virtual engagement of the show, which will also be featured at San Diego Repertory's online Latinx New Play Festival 2020.

Asked what it's like doing a comedy show at the height of so many catastrophic events, Gomez replied, "We are hit so hard in California. Either people are packing their 'go bags' and fleeing, or we are sharing the sadness of our friends. But it's surprising how many show up for online comedy and laugh —to keep from crying, maybe."

Stand-up performers have had to abruptly shift gears as well, by directly focusing on current events.

"A lot of comics are not relying on our pre-pandemic material, but finding the absurd in what is happening right now, anti-maskers, the orange sky, the apocalypse; all very gallows humor," said Gomez. "I'm very proud of comedians who meet the challenge. They are working hard."

The writer/performer of thirteen solo plays which have been presented nationally, Off-Broadway and internationally, Gomez is also the winner of a GLAAD Media Award and Theatre LA's Ovation Award. Her 75-minute show will largely consist of her performing live from her 'virtual stage.' Mixed in will be a few short film clips from Spanking Machine's final invited dress rehearsal at Brava Theatre San Francisco on March 12, before shelter in place was ordered.

"My living room looks like a public access studio now," said Gomez. "When the pandemic's shelter-in-place started, I invested a chunk of money into live streaming gear. I even bought a microphone stand. I just had a feeling performance venues would be the first to close and the last to open. I geeked out watching hours of tech tutorials on YouTube. I made a lot of mistakes at first, but so did the networks. The pandemic leveled the playing field between networks and DIY performers."

Since she's performing from home, Gomez, joked, "I'll have to ask my neighbors not to vacuum during those times, and I'll be wearing pants and shoes like a real show."

She's also keeping busy with other online gigs. "This month I'll be doing some comedy segments for a Frameline party, an event in LA, and a virtual woman's festival in Maryland and Who's Your Mami Comedy for Brava Theater as well."

Other performers are adapting as well.

"When I book talented comedians for Brava, I ask them if they have a strong wifi connection and external microphone and a quiet space to perform," Gomez explained. "Talent is not enough. Gear up, performers."

The next Who's Your Mami Comedy night is Sept. 17. 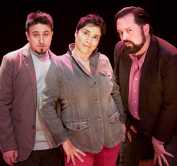 Marga Gomez rings in the New Year
Sign up!