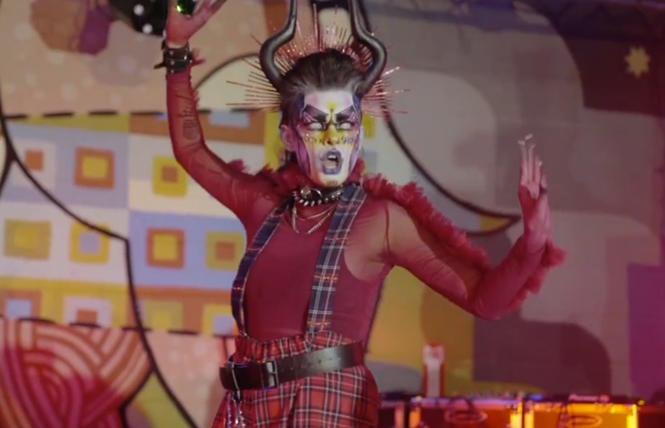 Andro Gin performing at the 2019 Oaklash

Inspired by Wigstock, but with a decidedly East Bay edge, the third annual Oaklash Drag Festival goes online September 4 through 6 with more than 100 performers.

With pandemic pivoting in place, the drag performers have turned to streaming services like Instagram, Zoom, and Twitch to create a whole new renaissance of innovative and boundary pushing performances.

"Even if the bars have closed, drag culture hasn't gone anywhere!" said co-organizer Mama Celeste in a press statement. "It's time for a long overdue celebration of the local queer culture that can only be found in the Bay.

The weekend will also feature panel discussions on race, disability, and how drag performers are adapting in the time of COVID-19.

One advantage of this year's virtual format is a addition of performers from around the world joining in. Yvie Oddly (RuPaul's Drag Race Season 11), Angele Anang (Drag Race Thailand Season 2), Landon Cider (Dragula Season 3), Vander Von Odd (Dragula Season 1), Meatball (Dragula Season 1), Horrorchata (Founder of Bushwig) and many others are on the lineup.