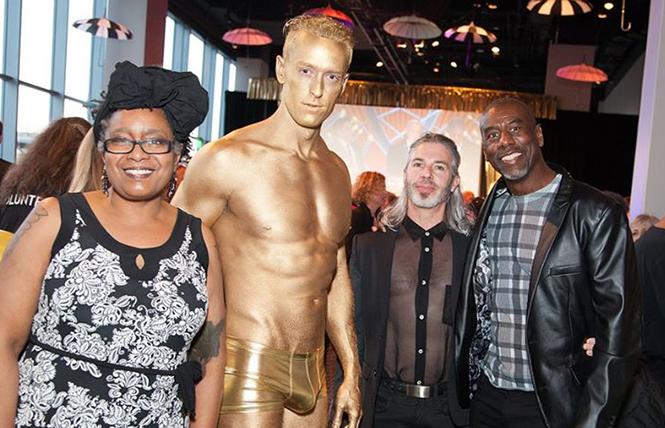 To celebrate four decades of glamorous fundraisers, the Academy of Friends welcomes patrons at their annual Oscars-viewing party at a fabulous new location, and with a Ruby Red theme.

"The Commonwealth Club is a wonderful new venue with areas on three different floors, all of which look out on the Embarcadero and the Bay Bridge," said Adam Sandel, Director of Fundraising Events for the LGBT Asylum Project, in an interview with the Bay Area Reporter. "It's a new look for the whole event, with more opportunity for people to explore."

At the party, which will show the Academy Awards broadcast February 9 on large screens, The LGBT Asylum Project is the main recipient of funds raised this year, marking a new additional focus from decades of fundraising specifically for AIDS/HIV nonprofits. Immigration support for lesbian, gay, bisexual and transgender refugees has become an increasingly pressing issue, in addition to some of those clients also being HIV-positive.

To reflect the international theme, an array of delicious food will provided by Coskun Abik, the owner of Lark, Blind Butcher, Moka Café and Dunya Bistro.

"He's creating international foods at different tables to reflect The Asylum Project's work with people from all over the world," said Sandel. "Asylum Project clients will also be in attendance, so they can discuss their experience and how the Asylum Project has helped them."

Academy of Friends Founder Kile Ozier said, "The LGBT Asylum Project is not simply the beneficiary, Academy of Friends is arguably the actual beneficiary of this new relationship. It's a brilliant way to take what remains of AOF, and the legacy of good on which the organization rests, restore its integrity, focus its efforts, and enjoin it on a path that's eminently relevant and embraceable today."

Between serious issues and the dramatic themes of many Oscar-nominated films, drinks will flow, including beers from official sponsor 21st Amendment Brewery. Wine, champagne, cocktails and soft drinks will also be served.

Academy of Friends Board Chair Michael Myers noted, "Every dollar of ticket and silent auction sales will go directly to The LGBT Asylum Project. And that money will save lives."

All funds raised from ticket sales and the lavish silent auction items, including fine art, wines, jewelry, theatre tickets, and high-end fashion items will go directly to the Asylum Project. So bid on glamorous items as a gift or for yourself.

Sandel promised several surprises throughout the evening, which will take on a ruby color scheme. Red attire or accents are encouraged at the black tie affair, which means red ties or glam couture will fit right in.

But of course, the main attraction will be watching the Academy Awards in stylish comfort. For gay fans, will Renee Zellweger win for her portrayal of Judy Garland?

For those perhaps too young to have grown up loving Ms. Garland, the event's ticket price range offers a Young Professional price of $150 for people 21 to 29 (with ID).

The broadcast start at 5pm. VIP entrance begins at 4pm, so super-patrons can get drinks and food before the show starts.

No matter when you arrive, work some style, enjoy the views, and have fun.

The Academy of Friends Gala, Sunday, February 9, 5pm-10pm, at The Commonwealth Club, 110 The Embarcedo. $150 and up. www.academyoffriends.org