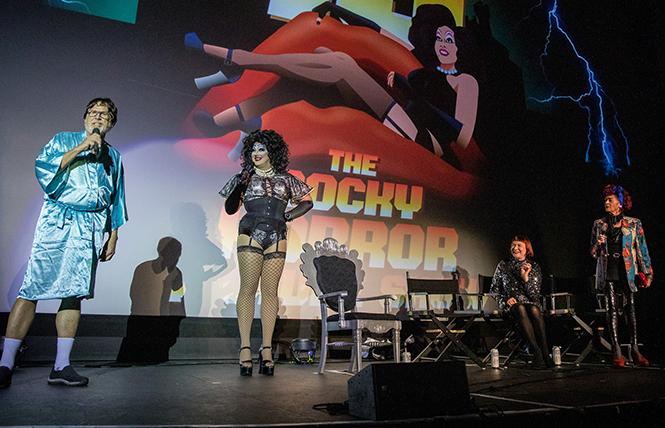 It was great when it all began. SF Sketchfest's January 11 night honored the 45th anniversary of The Rocky Horror Picture Show, with Peaches Christ hosting a Q&A with Barry Bostwick, Nell Campbell and Patricia Quinn.

The show started off with Trixxie Carr, in a gorgeous zig-zag revealing gown, singing "Science Fiction," the opening credits song from the cult favorite film based on Richard O'Brien's musical. 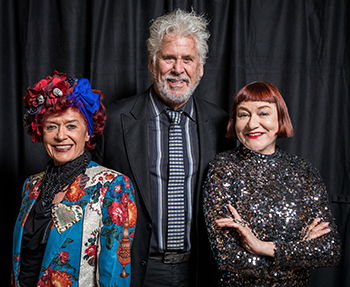 Accompanied by half a dozen Midnight Mass players, the number gave a nod to the numerous shadow cast performers, with a bit of better choreographic flair.

Peaches then welcomed three stars of the film, Nell Campbell (Columbia) and Patricia Quinn (Magenta), who both vamped down an aisle of the theatre.

In a move to almost top his 40th anniversary appearance five years ago when he surprised even Peaches Christ by appearing onstage in Rocky Horror finale drag, Barry Bostwick chose to this time enter in the costume of his character Brad Majors' post-Frank-sex kimono, and not much else.

"It's the only movie to have done what it did," said Peaches in opening comments. "When it came out, people didn't understand it. Then it found its audience."

Bostwick recalled the revived popularity of the film (which flopped in its premiere) at New York City's Waverly Theatre. 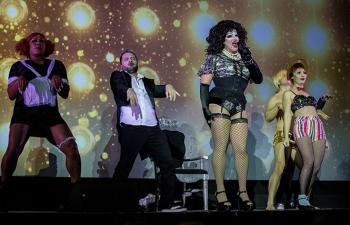 Peaches Christ leads a song and dance variation of

Quinn reminded all that the initial London Rocky Horror Show was a hit from its premiere.

Added Campbell, who also starred in the original musical, "The stage show was an overnight sensation. But it was also in the smallest theatre in London, with only 60 seats, so it was more like performing in someone's sitting room."

Quinn explained the clever repertory marketing plan devised by a young 20th Century Fox executive, who said, "'We'll put this on in every campus across the states at midnight,' and it worked."

Quipped Campbell, "We put the camp in campus."

Asked by Peaches for any untold on-set tales, Bostwick said, "The Transylvanians were stoned the whole time."

"I remember one of the actors, when we were waving at the [newlyweds'] car as it drove away, passing a child actor, yell, 'Hit the kid! Hit the kid!!'

Campbell initiated what became a running joke through the night, that "Barry and Tim Curry did have a shag," which Bostwick refuted, insisting, "I want evidence!"

Patricia Quinn recalled the final days of shooting, when director Jim Sharman asked her to lip-synch the opening song, "Science Fiction." He explained his idea for an homage to Man Ray's 1936 painting, 'The Lovers,' and its disembodied lips. 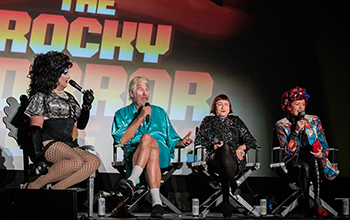 "It was my song in the play, and he wanted me to lipsynch Richard's version," said Quinn. "I said, 'My lips and his voice? How much?"

"They've become the most famous cinematic lips of all time," added Peaches.


Among friends ... or sane persons
More banter kept the audience laughing and clapping, including Bostwick saying how he's 'embraced' his 'asshole-ness' as Brad Majors. Campbell discussed her 'nipple slips' and costume difficulties, and described costar Meat Loaf as "one big gorgeous hunk of babydom."

Asked to comment on the (not present) Susan Sarandon's claims that the drafty mansion where they shot most of the film gave her pneumonia, Quinn quoted Tim Curry as saying of Sarandon, "He was much more subtle. He said, 'That poor dear Susan did catch pneumonia, and we never heard the end of it."

As part of the audience Q&A, Campbell offered one of the best lines of the night. Asked how many takes she needed as Columbia for her tap dance solo in "The Time Warp," Campbell replied, "I'm a one-take bitch!"

The cast and performers then danced along to "The Time Warp," as Quinn and Campbell sang live to their parts.

Through the screening, members of the Berkeley-based Bawdy Cast performed select sections of the movie, including the laboratory scenes with their own elaborate portable set pieces and props.

Despite the cacophonic shout-outs that nearly drowned out the film (back in my day of performing in a Kent, Ohio shadow cast of RHPS as Brad Majors, audiences were a bit more clever and selective with their callbacks; but they also squirted me and 'Janet' with water pistols), it proved to be a truly fun night for all Rocky Horror fans, new and old.