Beth Leavel - Broadway star of 'The Prom' at Feinstein's 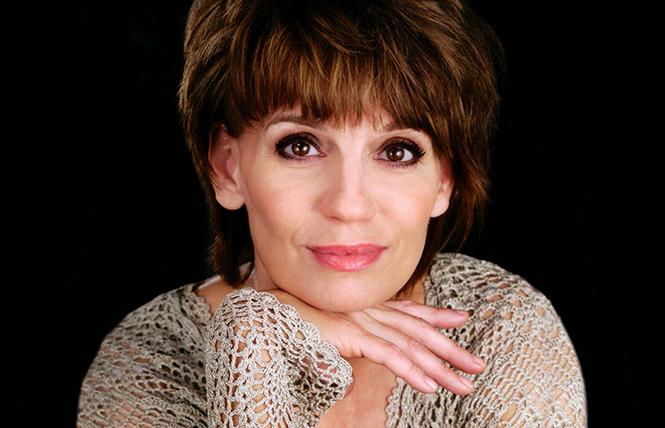 Sometime next year, the whole world will have the opportunity to meet Dee Dee Allen. She's an over-the-top Broadway diva who, with a motley crew of publicity-seeking New York thespian pals, comes to the aid of midwestern lesbian high school student in the 2018 musical comedy The Prom.

In a recent interview with Beth Leavel—who was Tony-nominated for the role and appears at Feinstein's at the Nikko next weekend—the Bay Area Reporter asked if it was true that the part was written with her in mind.

Leavel begged to differ: "Not written with me in mind," she faux-harrumphed a la Dee Dee, "Created especially for me! My DNA is all over it."

In fact, Leavel, a crackerjack comic performer, worked closely with the show's creative team over seven years of development, including a run at Atlanta's Alliance Theater two years prior to its arriving on Broadway.

"We must have changed the lyrics to the opening number 50 times," she recalls. "I was going onstage with new lines in my bra."

Her relationship with The Prom's white-hot director Casey Nicholaw (The Book of Mormon, Aladdin, Mean Girls) goes back to 1992, when they sang and danced together in the company of Crazy for You (his Broadway debut, her second show, following 42nd Street). And Nicholaw directed her in 2006's The Drowsy Chaperone, for which Leavel won a featured actress Tony.

Alas, when The Prom debuts as a Ryan Murphy-produced Netflix film in 2020, Leavel will not appear in her signature role.

"They gave the part to a real up-and-comer," she laments. "Her name's Meryl Streep."

"What are you gonna do?" Leavel notes good naturedly. It takes huge names to sell movie musical these days. The Netflix version of The Prom also counts James Corden, Nicole Kidman and Ariana Grande among its cast.

"Look, she's a hero," says Leavel, who says that Streep did come to see her perform as Dee Dee on Broadway. "She can always call me if she needs some tips."

Still, just as La Streep doing The Devil Wears Prada only burnishes the reputation of Anna Wintour, her taking on Dee Dee Allen should bring well-earned attention to Beth Leavel.

In fact, Leavel says she's on the brink of a major Broadway announcement.

"Hopefully I'll be able to tell everyone in San Francisco."

Meanwhile, audiences at Feinstein's will have an opportunity to hear songs from The Prom performed by the woman for whom they were actually written. Leavel's cabaret act will also include musical selections from some of the dozen other Broadway shows she's been in, an eclectic list that ranges from Showboat to Mamma Mia to Elf.

Asked which of her shows has meant the most to her, though, Leavel doesn't hesitate.

"It breaks my heart that The Prom closed. It wasn't based on a brand, it didn't have a big TV star to sell tickets. But I loved it and I wish it ran longer."