Getting a Hedda - Drag comic & singer Hedda Lettuce at Oasis 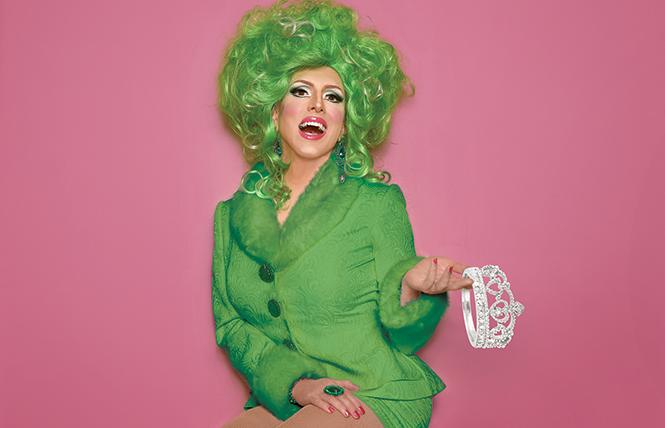 Over the years Hedda Lettuce has built up quite an impressive resumé. The performer, actor Steven Polito, has appeared on MTV, Comedy Central, The People's Court, Sex and the City, and had a cameo in the hit drag movie To Wong Foo, Thanks for Everything, Julie Newmar.

Polito has also been seen with Tyra Banks and Madonna, and even has a connection to President Barack Obama: Lettuce's Christmas ball ended up on Obama's Christmas tree. At the time, Lettuce was labeled as one of the top four reasons for the decline in America by Fox News!

Hedda/Polito is well known for being one of the few drag artists who sings live, as opposed to lip-synching, as most other drag queens do. Lettuce is often referred to as "The Green Goddess," but said he prefers being called The Queen Of Green.

"Because I have green hair, love money and I am so gorgeous, people are green with envy when they look at me," Polito said in a phone interview with the Bay Area Reporter.

When he takes to the stage at Oasis, Politio will be doing what he does best: making people laugh. He promises ribald improvisational comedy and sultry songs, which includes his own outrageous parodies of classic tunes.

"Hedda Lettuce is a fun time to have," said Polito. "Hedda is a comedian, and a singer. I love performing live. I think I'm mostly in my element when I have the energy of a live audience." 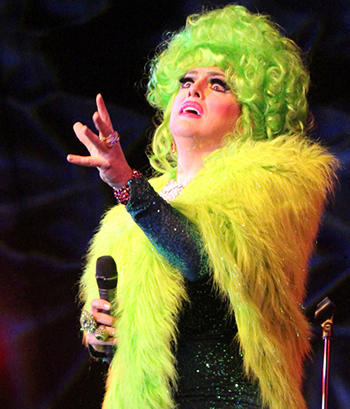 The name Hedda Lettuce came to Polito in a dream. At the time, he was told that it was a horrible name, but he thought it was catchy. He describes his drag persona as bawdy, glamorous, funny and outspoken, someone you'd like to sit next to at a dinner party because she says what she feels.

Playful aunt indeed. In addition to his other talents, Polito is a songwriter whose compositions include "You Can't Drink With A Dick In Your Mouth" and "Jesus Take The Wheel Because I'm Too Drunk To Drive."

"The show has a format, but it also has a free-for-all feel at the same time," said Polito. "Some of it is definitely go-with-the-flow. I don't mean to toot my own horn, but no one is going to do it if you don't do it yourself. When you come, you're going to see what a very good live performer is all about. It'll be a master class in live performance. It's a solid show; it's got a beginning, middle and an end, which a lot of things don't have these days."

Polito says his character hails from Pigeon Tit, Tennessee, where she grew up with her mamma, Shredda Lettuce, as her deadbeat dad was never around. She talks about mom and dad in her act, along with others from her family history.

Polito, who actually lives in New York City, does all the writing and songwriting himself. His song parodies run the gamut from Lady Gaga to Frank Sinatra, but he points out that 90 percent of the act is original material.

"I love the connection between the audience and the entertainer," he said. "When I talk to the audience, comedy sparks from that. The improvisation is the ultimate celebration of life, by being in the moment completely with the audience and yourself, and by being a crazy, zany character. It's scary, but it's magical when it works."

Polito said that he's excited about returning to San Francisco, his ¬—and Hedda's— first visit here in quite a long time. He once lived here for nearly a year, during which time he did a lot of theater, including the infamous Christmas with The Crawfords drag comedy show.

While he's here for his current gig, he hopes to put in some down time; walking around, going to cafes, and hanging out with friends. Polito points out that one of the best things about being a drag performer is not being recognized when he's out of drag.

"You can go to Blow Buddies and no one will know!"

Oasis telethon to feature dozens of talents
Sign up!