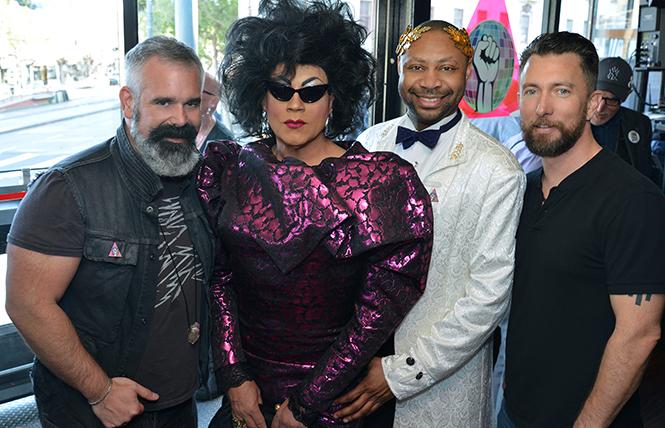 While fundraisers and drag queens are commonplace in the Castro, it's rare that 100 percent of the proceeds from a three-hour Friday event goes to a great cause. But, that's exactly what The Disco Coalition, a new series of happy hour nights leading up to San Francisco Pride, is all about: shining a spotlight on the queer community and raising funds for nonprofits.

The debut Disco Coalition event on March 29 at the Lookout honored queer hero Juanita MORE, a matriarch of the House of More, who's known for her tireless fundraising, fabulous events and food and world-class SF Pride parties.

The event benefited the venerable GLBT History Society which operates its museum in the Castro, with archives downtown. In addition to the proceeds from the jam-packed patrons 'drinking for good,' Titos Vodka will match monies raised, up to $1,000, for each of the events through June. 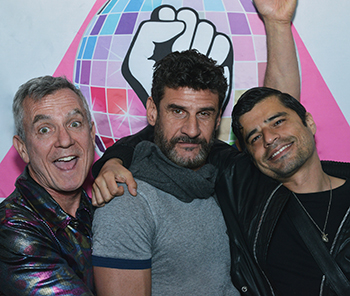 The weekly happy hour event will raise money for a different LGBTQ+ nonprofit, including organizations such as the Castro Country Club, Immigration Equality, Queer Lifespace, the San Francisco AIDS Foundation and TRUTH. The first event raised a total of $4,750.

Judging from the turnout of the first Disco Coalition party, the money raised for those nonprofits could be significant. The drinks were flowing and the crowd —a friendly mix of all ages, genders and sexual persuasions— grooved to the music from Disco's Golden Age spun by DJ Sergio Fedasz and San Francisco legend and party partner Steve Fabus, the cofounders of Go Bang.

"Historically, gay bars in this country have acted a keystone for the community, whether for celebrating, socializing or activating," said Hastings, who is also owner of the Lookout. "We wanted to honor that legacy and simultaneously build upon it with something that could live beyond a single charity event at a gay bar."

Known as Queeros, the Disco Coalition's queer hero honorees have driven and inspired positive change through their vision, sacrifices, dedication and activism. Patrons of the party can 'come off the streets and back into the bar' this spring to drink for a good cause and celebrate other 'queeros' at future events including Dennis Peron, Diane Jones, Jose Sarria, Sylvester and David Glamamore, who was in attendance at the debut event.


C.J. Knight is a San Francisco nightlife photographer and the co-producer of Glitter Bomb TV. You can follow his work at: www.instragram.com/LeftCoastScenesSF