Hole in the Wall's 25th - Celebrating a quarter century of beer, bikers and rock & roll 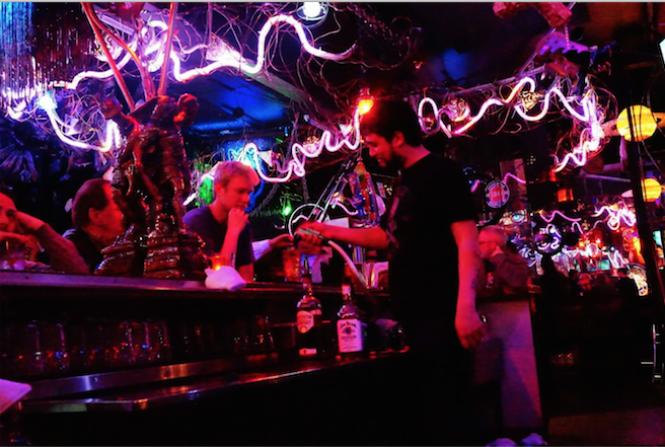 On Saturday April 13, the Hole in the Wall Saloon will celebrate its 25th anniversary with a party. The bar is best known for its colorful (some say surreal) decor, and for its rock music.

Don Baird has been spinning tunes at "The Hole" for most of the bar's run. In a phone interview, he spoke about what a fun watering hole it is, noting that he and the bar's other DJs don't spin the standard dance tunes which are usually heard in gay bars. At Hole in the Wall, patrons are treated to good old-fashioned rock and roll.

"That's been consistent for the whole life of the bar," Baird said. "I think this has a great deal to do with the bar's popularity, I think it's mainly the music."

Baird pointed out that people don't dance at Hole In The Wall. It's a place for listening to the music, for talking, and for playing pool. He spoke about the kind of people who are attracted to the bar.

"I think we draw a crowd that is a very mixed variety of ages," he said. "There's been a bit of a focus on bikers, moreso at the bar's first location and during the first decade. But I'd say the music is the main draw. And the bar has a kind a freewheeling air about it. It's a fun bar. It's comfortable, and people get to know the bartenders."

Baird added that Hole in the Wall does get clientele from the leather community, given South of Market's popularity among the leather crowd, though he did say that leather people remain focused primarily on The Eagle.

"For the most part, all the bar owners in SoMa are friendly with each other," he said. "It's not a competitive scene. There are only four-five gay bars around there, and we all get along." 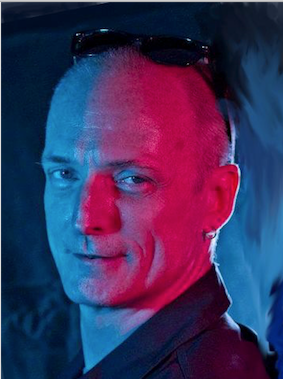 Hole in the Wall began its life in April 1994 on 8th Street, but closed that location in 2006. They reopened at their current location, on Folsom Street, in 2008, in a building the owners bought. At first they faced opposition from the city's Entertainment Commission regarding the relocation, but received support from openly gay former District 8 Supervisor and State Assemblyman Tom Ammiano, as well as from former supervisor Carole Migden, a lesbian.

"There were a lot of complex issues regarding licensing," Baird said. "We had a bit of a fight, but it all worked out."

The name Hole in the Wall was chosen because owners John Gardner and Joe Banks wanted a "hole in the wall" biker bar where they could play the rock music they liked. The couple has been together for 32 years.

"They're good people to work for," said Baird.

The anniversary party, Baird promises, will be fun, with the owners going all out to ensure that patrons have a good time. There will be no cover charge (Baird said that there's never a cover charge at the bar) and that food will be served during the earlier part of the evening. All attendees will receive a commemorative pin featuring the bar's logo. 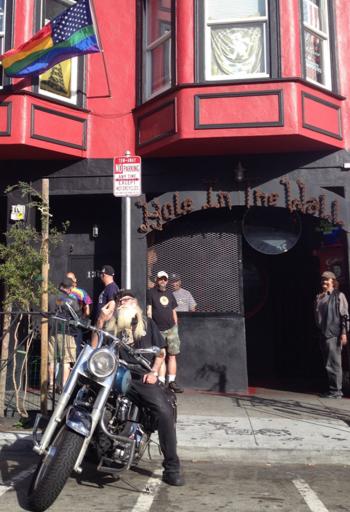 Outside the Hole in the Wall on Folsom Street.

"On the night of the party, we'll feature small sets from all three of our DJs," Baird said. "I'm very excited about my set for that night. I'll be playing hard rock and roll, and it'll be fun. I've been shoving rock down the gay community's throat for years, and people have grown to like it."

Baird hopes to be at Hole in the Wall for a long time to come.

"There's not a lot of things in my life that I've done for twenty-four years, and I feel very fortunate to have been able to play music in this place for so long," he said. "In many ways, it's the perfect job. Every time I go in, I'm always thinking how grateful I am that I get to do this thing I love in this bar. It's great."

Join Don Baird and the bar's patrons at the Hole in the Wall anniversary party on Saturday, April 13. The party begins at 6pm and will continue until 2am.