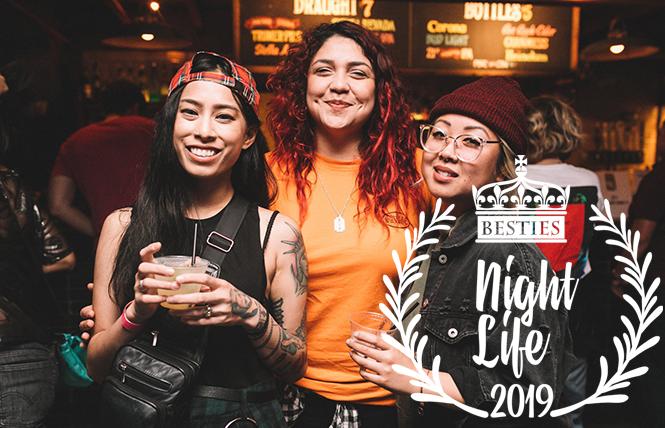 The Besties give us an opportunity to visit some longtime favorite watering holes, to visit some of the newer venues in town and unfortunately to note the passing of one venue. Whether you're looking for the right spot for new adventures, a quiet place to talk over cocktails or exciting spots where anything can and does happen you've got a lot of choices in this year's winners and runner ups.

We actually didn't have this category on the ballot, because only one new bar opened in the past year worth noting. Jolene's not only serves the mid-Mission neighborhood (fixing the empty spot in our hearts after The Lexington's demise), the staff serves up a delicious brunch on weekends, and has given a weekly home to Uhaul, the popular women's night. Welcome, Jolene's!

With events like Bearracuda, Underwear Night and the ever-popular Sunday beer bust, it's no wonder that the Eagle tops (so to speak) the list of best places to meet men for the fifth year in a row. Our readers know what they like and they love the Eagle. And is it any wonder? Because the Eagle makes a place for nights like Pound Puppy and Frolic ("Oh dear, the furries are here!"); live music and both already famous and up-and-coming DJs.

The Eagle is a well renowned success story of a bar that fought for its place to remain in a changing San Francisco and won. It is no wonder that it is the anchor for the Eagle Plaza project, which is planning the world's first leather plaza on 12th Street (in front of the Eagle).

A friendly bar which has the feel of a neighborhood bar and yet has become a cultural institution? Indeed the Eagle has all this and a sense of fun that brings our readers back year after year - and with events like "Leather Bar Showtune Sing-Along" - what's not to love? 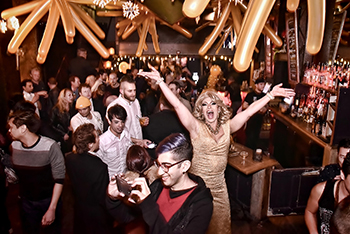 Oasis is once again the winner in multiple categories for the Besties. That the triple winner as the best place to meet trans people, best dance floor and best cabaret for the second year in a row reiterate the success story that it has become and the contributions that the Oasis has made to South of Market nightlife.

When we lost Carol Channing earlier this year, Oasis was the place where those who love performance celebrated her life. Oasis is where Congregation Shaar Zahav went to celebrate Purim with Gender Schmear. Its dance floor gives events like FurrPlay the space to kick up their paws and have a roaring good time. It is the place to find a broad cross-section of our community having a great time. As it's a performance and dance venue for all, Oasis has made itself a go-to place for our readers to meet trans people.

Oasis calls itself a "unique home for San Francisco nightlife - presented by drag legends D'Arcy Drollinger and Heklina" — and it is certainly that. With Bestie-winning event Mother carrying on the tradition started at the Stud, and recent events like Queens Read Celebrity Autobiographies and Hamiltunes: Hamilton Sing-Along, you can't go wrong with a night at the Oasis. So perhaps you can raise a glass in memory of the runner-up Divas, which closed on March 30. 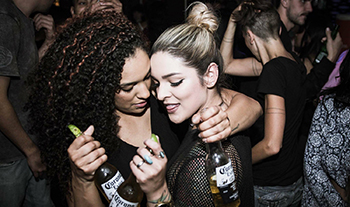 Vice Tuesdays has won the day for women in the Castro with its weekly dance party. DJ Val G and guest DJs present a mix of music including Hip-Hop, funk, blasts for the past and top-40 hits. Recent guest DJs include DJ Tatiana, Jesse Robeck and DJ Lady Ryan with photos by Takeover Tokyo.

Speaking of their events, Vice Tuesday organizers recently said, "Queer spaces are sacred. Dance floors are our church. We worship to deep bass and the beauty of bodies moving to the beat; anointed by sweat, grounded in community. And in these sparkly, fabulous places, we feel free." So if you are sparkly, fabulous and free then QBar is the place to be. 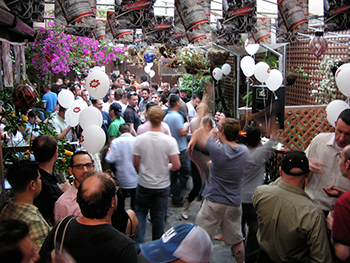 enjoy a beer at The Pilsner Inn's patio

This Saint Patrick's Day when I was looking around for the perfect queer space to quench my thirst for a Guinness and cider the first place I thought of was the Pilsner Inn. With 30 beers on tap you're bound to find something you love, whether your tastes tilt towards hoppy IPAs or substantial stouts. With an amazing bar that has a history itself (it was once a lane in a bowling alley) and a backyard patio complete with gigantic koi in a pond the Pilsner is the place for you if you love beer (and who doesn't)? 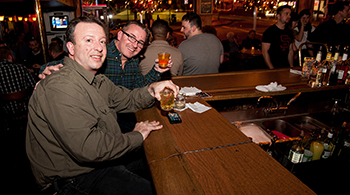 The Twin Peaks Tavern has a long and storied history (as do many of its patrons). There has been a bar on this site since 1935 and it has been a gay bar since 1972, so obviously they know what they're doing. When it first became a gay bar, the owners inadvertently made history by taking down the window coverings. Then owners Peggy Forster and Mary Ellen Cunha simply wanted to be able to look outside.

And it's easy to understand why: with a birds-eye view of Castro Street, you can see the neighborhood pass by on a daily basis. Perhaps that's why the bar has gathered a group of regulars over the years who can regale you with stories of both the bar and the community. Whether you're out for a film at the nearby Castro Theatre or shopping in the neighborhood the Twin Peaks is the bar that makes you feel right at home. Stop by and say "cheers" to a local institution and congratulate them on this well-deserved accolade. 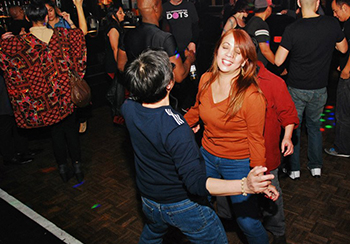 The White Horse is one of the bars that lays claim to the "oldest gay bar in the United States" label. The East Bay Express dates the building the bar is in to 1936, so it is definitely the oldest gay bar operating in the bay area. When you step into the bar it's clear why it has been open so long. When's the last time you stopped by a bar that was homey enough to have a fireplace?

With their "Triple-D" parties (DJs, dancing and drinks) every Saturday, Thirsty Thursday's College Party and karaoke several nights a week it's the kind of bar where something is always going on — and this has been acknowledged by the B.A.R. readers as the bar has won the Bestie as the best East Bay bar for several years in a row. 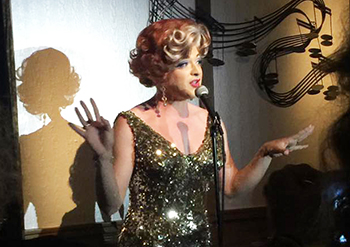 What could be better than a cabaret hotspot with the best dirty martinis in town? Or if you don't fancy a martini then how about a lemon drop? Regardless as to your tastes you're certain to find a drink that fills the bill here — and they've been doing it long before the "craft cocktail" craze happened.

You have a broad palate of drinks to choose from here, including Chocolate Martinis, Mango Melon Martinis and Cosmopolitan Martinis. For those interested in more straight-forward drinks, try the classic Martuni (Bombay sapphire gin, and dry vermouth — with a lemon twist or olive). Side effects may include engaging in a sing-along at the piano in the back room lounge.

Hankering for football (American or European) on multiple screens? Want to watch the NBA while feasting on wings? Want a burger and a beer with your baseball? Have I got a place for you! Hitops provides you with sixteen screens to watch your chosen sport while enjoying your chosen beverage. And when is the last time you paid $5 for a basket of wings? Well you can do that on Monday nights. And that's probably one of the reasons Hi Tops has winged its way into the hearts of B.A.R. readers.

Still going strong in its sixth year of business, Hi Tops shows no sign of slowing down. Besides those $5 baskets there's Tuesday night trivia and Thursday night's Gym Class (with go-go boys and whiskey shots). With a menu that includes burger, nachos and a kale Caesar salad your brackets are filled at least as far as food is concerned. 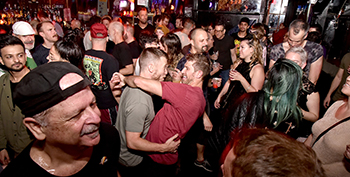 The Stud has a powerful history. It's the bar where Sylvester met the Cockettes. It featured live rock bands long before many other gay bars. And it inspired a generation of people in the LGBT community for whom alternative was the go-to destination. It featured Heklina's fabulous style of madness before the Oasis.

And the wonderful news is that the Stud has a new two-year lease, which means it will be around for some time to come. Still going strong after 52 years with karaoke nights, open mic nights, tea dances, burlesque and drag nights, it's still a magical club after half a century. Come see the club which B.A.R. readers have decided is the best SoMa nightclub — we're sure you'll agree. 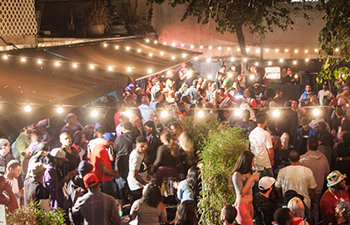 This year the EndUp replaces Blackbird as B.A.R. readers' favorite "stray" bar, and it's likely you will find more than a few strays here. The EndUp has a rich place in San Francisco LGBT history, whether it be in Armistead Maupin's Tales of the City in the '70s, or the rich history related to Club Uranus in the '80s and '90s. ShangriLa has brought the LGBT magic back to the SoMa club with DJs like DJs Paul Goodyear and Alan Liao. plus events like April's upcoming K-pop party. Come see the bar that's been celebrating music and diversity since 1973. 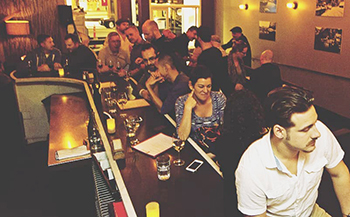 Wine, food, art and live music — who could ask for anything more? Whether you prefer white, red, rosé or bubbly, this is the place for you. Of course they have the perfect food to compliment wine, whether it be small plates, oysters, cheeses, sandwiches or deserts. With tarot readings, dirty Bingo, gypsy jazz and other live music, Blush has made itself into a destination on Castro street. Our readers have exquisite taste. 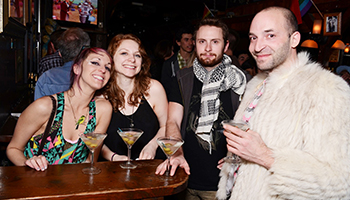 The Phone Booth is a cute neighborhood bar named for the nearby Telco (from "telephone company") building. As the telephone company was originally a monopoly it's a great place to read Frank Norris' novel about the power of monopolies over people — and it may give you some insight into what's going on in the Mission these days. When I visited recently there were patrons reading at the bar, so you'll fit right in.

While your musings about monopolies get overwhelming, there's Lagunitas IPA, Anchor Steam and Green Flash IPA on tap to distract you, as well as an amazing juke box (with Bowie, Blondie, Motorhead and Joy Division on it), Christmas lights decorating driftwood on the ceiling and an autographed picture of Barry Manilow to distract you. It's the perfect place to muse on what has become of the neighborhood.

The Cinch is now the last gay bar standing on Polk Street. As the bar celebrated its 20th anniversary with the current owners last year, it's a great place to remember the neighborhood and perhaps envision what it can become again.

If you happen to be headed to the ferries across the bay, the last best place to quench your thirst in San Francisco is the Cinch. Who wouldn't love a bar whose baseball team is called the Polk Street Hustlers? So come on down and have a brew and perhaps head out to the patio. But don't have too many or you'll forget to catch that ferry.